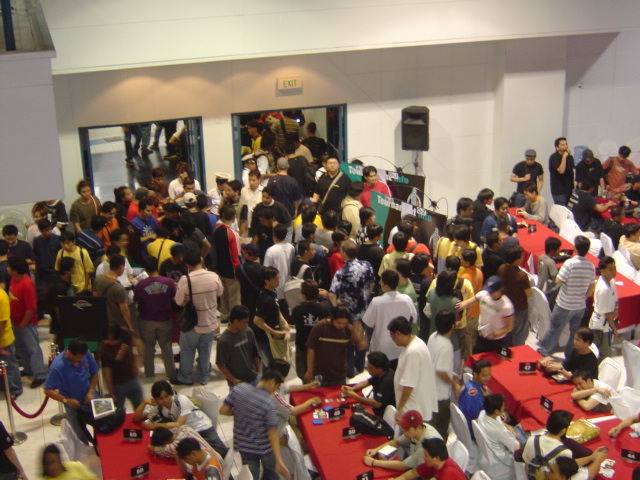 I attended Grand Prix Manila last March 17, 2006, and the event was jam-packed with people. Can you find me in the picture?

Maybe it's just me, but Wizard's coverage of Grand Prix Manila last weekend seems just a tad condescending to Filipino Magic players. Not that we mind, after all, local bets actually did kick ass and shrugged off the Japanese invasion.

If you are in fact a Filipino Magic player, then I hope you know what I’m talking about – last weekend at the Robinson’s Galleria Trade Hall, almost four hundred local and foreign Magic: The Gathering players gathered for the third-ever Grand Prix event held in Manila.

I was there, of course, since for some reason I enjoy this expensive game. Sadly, the usual bunch of people who I’ve played Magic with since college were not available to ride with me into battle; my companions that day were some people from work instead.

It was my first-ever GP, and it was an awesome experience, to say the least. Compared to the usual local events I’ve attended before, the atmosphere is much more formal; it really feels like you’re playing on a completely different level of Magic. I also played in a GPT the day before, which turned out to be a good idea as I suddenly got nervous playing against the Japanese guy who took me down in the second-round of the single-elimination trial. A good thing, because I was better prepared mentally the next day.

I blazed through the first five rounds with a 4-1 record, my sealed deck an all-attacking, no-thinking affair, battles mostly won on the back of a Silhanna Ledgewalker bearing a Moldervine Cloak or a Shadow Lance. My one loss was against an officemate who got me on bad draws… After he won our match 2-1, I proceeded to win every other practice game against him :(

Regardless, I was feeling pretty confident, even though my sealed deck had not been very exciting – not many bombs – it was doing fairly well, and I was winning matches fairly quickly, each best-of-three affair over in less than twenty minutes. I wanted that sort of deck, the type that wins fast, as I knew from history that long, drawn-out matches gave me a headache. I felt pretty good going into the 6th round, knowing that a win and a draw in the next two rounds meant I was sure to qualify for the second day. I hadn’t fought any foreign pros yet, but with my win record I was fairly sure I was heading into that territory…

So I went to check the 6th round pairings, and sure enough my next opponent was 2005 Invitational Winner Terry Soh. Whoo! I had been hoping I would get a chance to take on either Terry Soh or world champion Hori, both of whom were participating; what an upset it would have been for a local amateur with a sub-1600 rating to take down one of these guys!

Well, long story short, I didn’t win. :p He took the first game after some trading of blows; I gave him a beating in the second game via Skeletal Vampire and won unopposed. Third game, we were trading blows again, but he had a Hammerfist Giant that cleared the board, and I didn’t have any creatures to followup. He won shortly after. So much for that!

7th round. I needed to win this one to have a shot at the second day (not even a very good shot at that… I think only 20% of 5-2’s would have advanced, but my tie-break points were pretty good since 3 of my 4 wins were 2-0… ). I took game 1 fast, lost game 2 to a sudden surge of fatties, then lost game 3 with my opponent at one life! Sigh…

It’s just as well that I didn’t make it to the second day though… I thought I was just getting a headache from playing Magic all day, but I found out later I was already coming down with a fever and some colds. Even if I did make it to day 2, I would have just rare-drafted. :p

Well, that’s my small part of the GP Manila story. Eventually, local amateur JT Porter won the grand prize, netting almost four thousand US dollars. Sigh… that coulda been me :p I hope the guys at Neutral Grounds can manage to arrange another big event like this in the Philippines soon… while we aren’t the biggest Magic community in the world, we got a whole lotta heart. ^_^