Or “How Did A Ceramic Pot End Up In Stellar Orbit”? 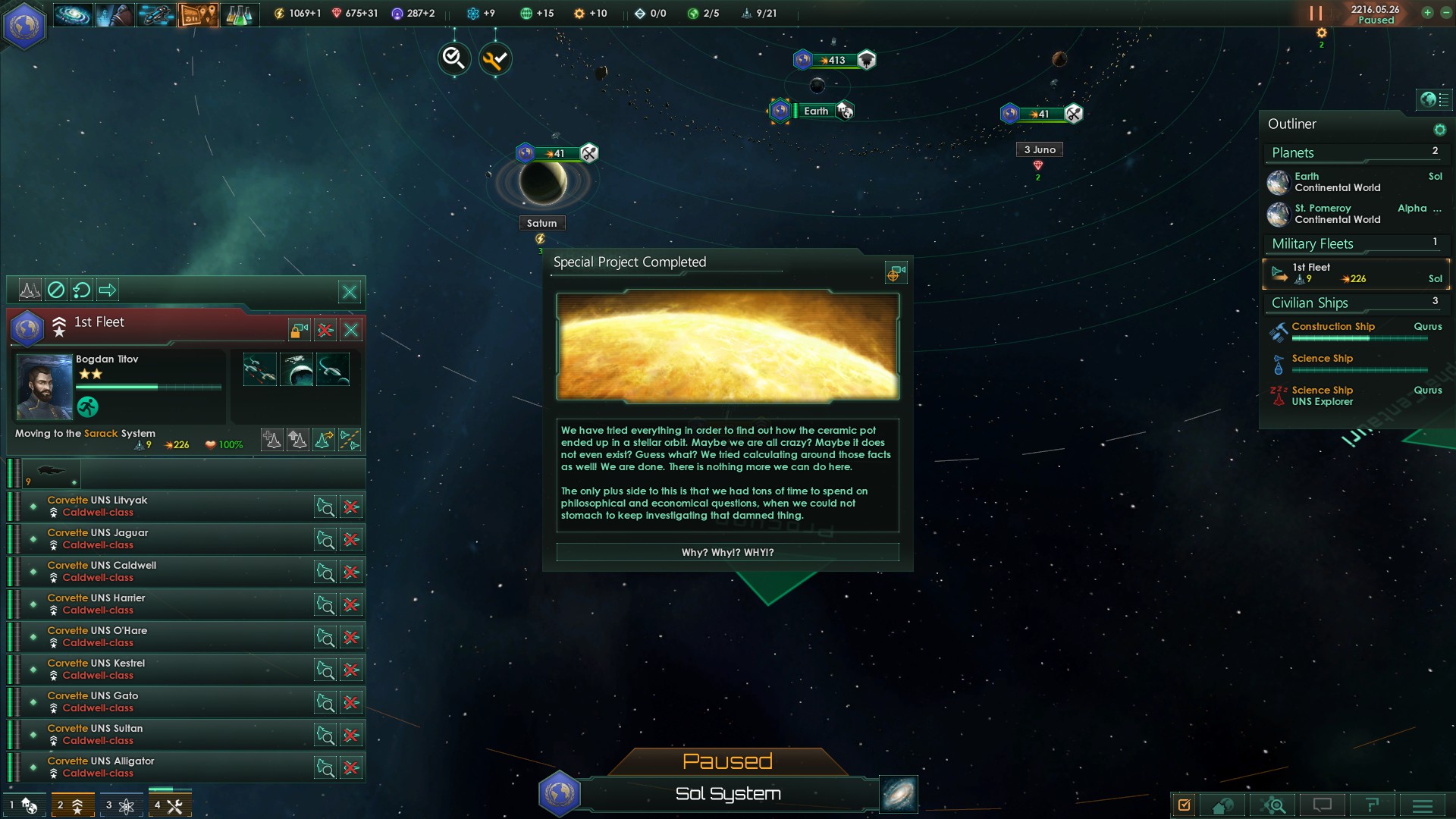 Stellaris is a 4x space strategy game available on Steam. The game is created by Paradox, well-known for a number of other grand strategy games mostly with a historical basis such as Crusader Kings. I’ve owned Crusader Kings II for a while now but never got into it too deeply because (a) it’s just a bit too overwhelming; and (b) I find the combat way too obtruse. Stellaris was supposedly a simpler and friendlier version of Paradox’s other grand strategy games, which piqued my interest. Reading a few posts over on r/Stellaris was enough for me to impulse buy the game last week. Review summary: game is great and adds a lot of interesting stuff to the 4x genre, but there are some flaws that will hopefully be improved upon in succeeding patches.

The gameplay framework is basically similar to other 4x space strategy games such as Master of Orion: “eXplore, eXpand, eXploit, and eXterminate”. You’re in charge of a burgeoning galactic empire. You send out science ships to survey nearby and distant star systems. You build colonies and outposts to extend your reach. You assign scientists to research new technologies that help you improve your empire. You encounter other starfaring alien races and either build fleets of spacecraft to bludgeon them into submission or use diplomacy to make friends, form alliances and eventually a federation. You can also encounter primitive alien species who have yet to make it off-world and choose to either observe them passively or try to speed up their development or uplift them to become new allies.

I’ll start with this because it’s my favorite thing about the game. It’s kind of weird to be talking about story in a 4x strategy game, they’re not really well-known for that, Civilization stories about Gandhi’s warmongering aside. It’s one of the trope inversions Stellaris has done. There are abundant special event chains to be encountered and some of them are hilarious really. These are reminiscent of Crusader Kings’ own event chains, the part of that game I found the most enjoyable. Combined with 4x strategy games penchant for emergent user stories, this means there will often be a lot of stories to tell about how your empire achieved galactic domination.

This is why you shouldn't let your officers drink on duty

Sadly there are at the moment only two victory conditions available in game: Domination (control 40% of all habitable planets) and Conquest (be the last independent empire standing). That being said, there are a few options to achieve both goals; they need not be achieved through warfare, but can be done through diplomacy. You can ally and eventually form federations with other empires and share victory conditions with them, which means you can achieve Conquest through alliance-building.

Speaking of diplomacy, you can do the usual resource trading and asking for border access and offering alliances or non-aggression pacts and such. But comparing it to their other games like Crusader Kings it’s admittedly quite shallow. Even some more complicated options that are available in simpler games like Civilization V are surprisingly unavailable. There is no way to bribe other empires for alliances or border access or maybe even declaring war on common enemies. I also wish there were special event chains or technology choices that involve diplomatic relations. Hopefully they can improve upon these things as they iterate with future patches.

There are a variety of alien races available to play, and you can customize your species at the start of the game. There are a number of customization options: you can control what type of climates your species can easily adapt to, what ethics your race follows (which can affect your diplomacy and sometimes your research options), and add other special traits that give bonuses to happiness, resource acquisition, etc. All other empires in the galaxy will feature procedurally-generated species as well. At the start, each empire is only inhabited by one species, but as you encounter more and more alien races, your planet populations can become more a mix of your native species and foreign species and maybe even robot workers.

Research and technology is split into three fields: physics, engineering and biology. These technologies will unlock new ship components (allowing you to design new ships Master of Orion style), improve your empire’s capabilities and provide new building and station options. Unlike Civilization’s technology trees, research options are dealt at random. You are given 3-4 alternatives to choose from every time, and sometimes you’ll be lucky enough to have a rare technology as a research option. In the late game, there are even dangerous technologies that provide significant benefit but can lead to your empire facing one of a few late-game crises.

While the game is fun to play, it starts to get weak in the mid to late game when most of your exploration is already done. More often than not, other empires will hamper your mid to late game exploration, and your science ships will have precious little to do in the later stages except maybe analyze debris from your space battles. The game also needs more special event chains in the mid to late game as it descends into long stretches of building things interspersed by the occasional war. It’s something they’ve roadmapped for the next few patches, to add more events specifically for colony-related events, so that’s something to look forward to.

There’s also a need for more resource sinks in the late game, as your empire has caps on how many of each resource you can store. In my most advanced game, I was at the resource cap all the time despite spending as much as I could on buildings, stations and spacecraft.

But the biggest problem is a technical one. As the number of planets and spacecraft under your control increases, the game encounters noticeable slowdown. At this point, the fastest speed is only slightly faster than the normal speed near the start of the game.

I’ve owned the game for a bit less than a week and have managed to bring three different saves to the mid to late game but finished none of them. You are able to delegate most of your planets to AI sectors (in fact you have no choice as there is a limit to the number of core planets you can directly manage), but empire-building and expansion can still become tedious in the late game given the normal size of the generated galaxies.

I also encountered a few bugs as I played. Nothing game-breaking or crash to desktop stuff, but things like quests becoming impossible to complete under certain conditions, or supposedly stone-age species owning starships, that kind of thing. Steam achievements also seem a bit buggy, I think they stopped firing after a certain point in the game. They’re planning a number of bug fixes within the next couple of months so hopefully most of these problems get addressed.

There’s a lot more to touch on as I’m pretty sure I’ve only scratched the surface of Stellaris, but this review is already way longer than I thought it would be. Stellaris is a fun, great game, providing a few good twists on the 4x genre, and very much like the Civilization games, there’s a strong tendency to play for much longer hours than you were planning to.

But there are still some flaws especially in the mid to late game. Paradox has a good track record of improving their games incrementally with free updates (I recently reinstalled Crusader Kings II after a couple of years and was happy to find a few features that weren’t there before), so hopefully many of these problems get ironed out in the next few months. I’ve already played way too much of this game than I expected, so I think I’m going to set it aside for a few months and come back to it later.