I recently found a stash of old DOS games we used to play, so I thought I’d write about the early days of PC gaming. My PC gaming career (such as it is) started way back in the MS-DOS era. It was an interesting time to be a gamer, to say the least. It was a time when you had to make bootdisks and fiddle around with files like autoexec.bat and himem.sys to make sure your PC booted with the correct configuration required to run your game. I got to become familiar with things like VGA drivers and sound drivers and so on.

I think we had our first PC in the household around ‘92 or ‘93, while I was in high school. I have this vague recollection of using some text from the first Civilization game in one of my Social Science reports. Pretty sure Civ 1, as I’m still playing the series to this day. I played a lot of the first Civ game, enough to be able to master the highest difficulty level and (with sufficient save scumming), conquer the world with Chariots before Christ is born. The first Civ game was also my first experience at “hacking” a game so to speak, since many of the configuration options were read from plain text files on the disk. Even the Civilopedia entries came from text files, so I was able to copy them out to use in my report as mentioned above.

Another mainstay of my early PC gaming years was LucasArts-style adventure games. I think my first exposure to these games was during a high school party back in maybe ‘93 or ‘94. The host had a copy of Maniac Mansion on his PC, and I spent some time playing that before getting stuck at the big door at the top of the stairs because the host had lost the copy protection disk. Within the next year, I had played the sequel game Day of the Tentacle (to this day I am unsure if I ever finished the first Maniac Mansion though) and the similar Monkey Island games. I must admit that I had a lot more patience then, as these days I haven’t gotten far with the current crop of Telltale-led adventure games and the endless trial and error that inevitably arises when you get stuck. (I’ve been stuck on Broken Age on PS4 for maybe a year now, I should get that done).

One of the earlist dungeon crawlers my brother and I played was the horror game Waxworks. This was a single player game, but I say “my brother and I” because we were often too scared to play the game alone. The sharp 90 degree turns meant enemies could jump out of nowhere. I’m sure if I played it now I would feel silly, but back then I remember we had tried playing the game at night while the parentals were out, and some baddie jumped out at us in the pyramid level and we went afk at the jump scare and ran out to the nearby sari-sari store. After typing this paragraph, I decided to try running the old copy of Waxworks I still had (you can run old games using DOSBox) and it reminded me that the game had very creepy midi music! Probably contributed a lot to the atmosphere. I don’t play horror games anymore nowadays lol.

Waxworks: The pyramid level was the one we were most familiar with, since it was the first one available.

Another early favorite were the Romance of the Three Kingdoms games by Koei. I remember playing RTK2 a little bit, but it was RTK3 that we generally spent a lot of time in (we = me and my brothers and some HS friends). I spent so much time on this game, I could finish the game from a single province in the final scenario (where your opponents were 3 large empires). One of our favorite features in RTK3 was the fact that there was a custom character creator. We had a copy of the game that we passed around with a whole bunch of custom characters named after our HS friends. My brother was a big fan of this feature too, he added a bunch of high-stat custom characters named after himself. Sadly, my only remaining copy of this game only has my brother’s custom characters and not the ones me and my HS friends made. 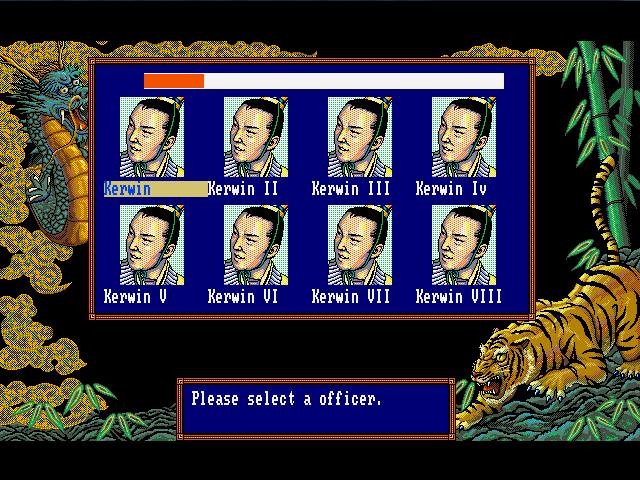 RTK3: He really liked naming characters after himself. Also I only noticed now the poor grammar i.e. 'a officer'

Prior to getting a PC, my video game exposure had been on the Atari and the Nintendo, which meant primarily real-time action-based games. My exposure to PC gaming introduced me to slower, more cerebral and more strategic games, a lifelong hobby that I’ve enjoyed ever since. What were your early days of PC gaming like?