Debating On The Internet

Sometimes I have this inexplicable urge to argue with people. With recent events I’ve found myself getting into more discussions, debates and otherwise friendly arguments online. The quality of these interactions hasn’t always been the best, and many times I feel like I should have stopped engaging sooner or maybe not participated at all. I’ve considered some points to help me decide in the future whether to bother engaging other people online.

Personally, I’ve always been both used to and biased in favor of vibrant and open debate and discussion. And I’m happy to say many of my closest friends are of the same temperament. But one thing I’ve learned is that many people don’t like their views being criticized. For some people, posting on the internet is putting themselves out there and risking being criticized (as if receiving criticism were a bad thing in and of itself!). I do think that more people voicing their opinions can only be a good thing, so maybe we can try not to be so aggressive when we know the person doesn’t like criticism or isn’t used to an open debate. " I understand that you believe that, although have you considered the studies that say … “ 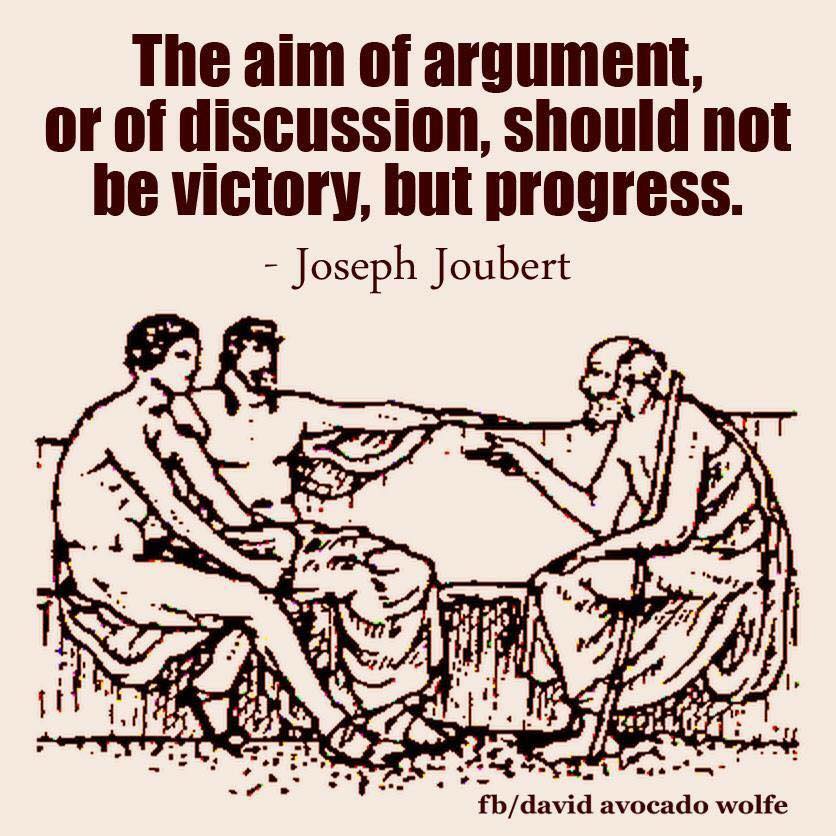 (Image cribbed from a friend)

Accept that you are not going to “win” any debate. From experience, it is very rare to win a debate on the internet. At best you are going to agree to disagree, or maybe find common ground to agree on and move forward.

Try to phrase your replies in the form of questions, they are softer and will seem less like an attack. “Isn’t there evidence of claim X?”, “What credentials does expert Y have?”, “Don’t you think this violate the principles of Z?”

Try to see what the other person is looking for. Many people online aren’t looking for debate or discussion, they simply want to air their view for others to consider or maybe look for some validation. It can be difficult, sometimes people can pretend to be open to discussion but really just want to reinforce their own views. It’s easiest if you already know the person. For example, if the person has a history of not believing easily-verifiable facts, maybe it’s better not to engage at all.

**Know what you are looking for. **Typically, there’s one of three things I want out of a discussion: (a) I want to gather more information to help in my own decision-making; or (b) I want to point out misinformation or logical problems; or (c) I want to present my own point of view for others to consider. If you’ve already met your goals, you can safely consider tapping out “I just wanted to say that I think X is a better choice. Take that as you will”. Of course sometimes there’s a fourth thing I want: just to engage in a lively discussion 😀

Avoid attacking the other person, even when he/she is obviously being a bloody idiot. Bloody idiots can have opinions too after all. It should be possible to point out logical flaws or misinformation without taking things personally.

**If you are aiming to convince others to change their position, you should be willing to change yours as well. **Not only is it more sincere, it’s also fair. It will make your own arguments more compelling if you can show a willingness to question your own assumptions as well. That being said, you probably only need to employ this if the other people are willing to change their positions too.

**Don’t take things personally, and don’t respond to criticism in anger. **If someone says something like your work is cringeworthy, instead of taking offense maybe you can ask the person to elaborate “Which parts did you find problematic and why?” If the person is not willing to discuss in detail, maybe it’s no longer productive to continue.

Know when to tap out of a discussion. You have to learn to recognize when other people are (a) not willing to consider other points of view; or (b) not looking for a debate or discussion or pros and cons. It will usually become obvious once they reply one or two times (sometimes it will be bloody obvious when they say something like “I believe in X no matter what”). Unless you are really enjoying the debate (which I am sometimes wont to do!), it’s probably not productive anymore to continue discussion. In that case, it’s probably better to just agree to disagree and move on.

I’m probably still going to occasionally dive into a debate just to be a devil’s advocate or even just for fun though, but hopefully these guidelines help me (and maybe even you!) recognize when it’s unproductive to engage and just to move on.