Magic Arena: First Time Mythic! I did it! 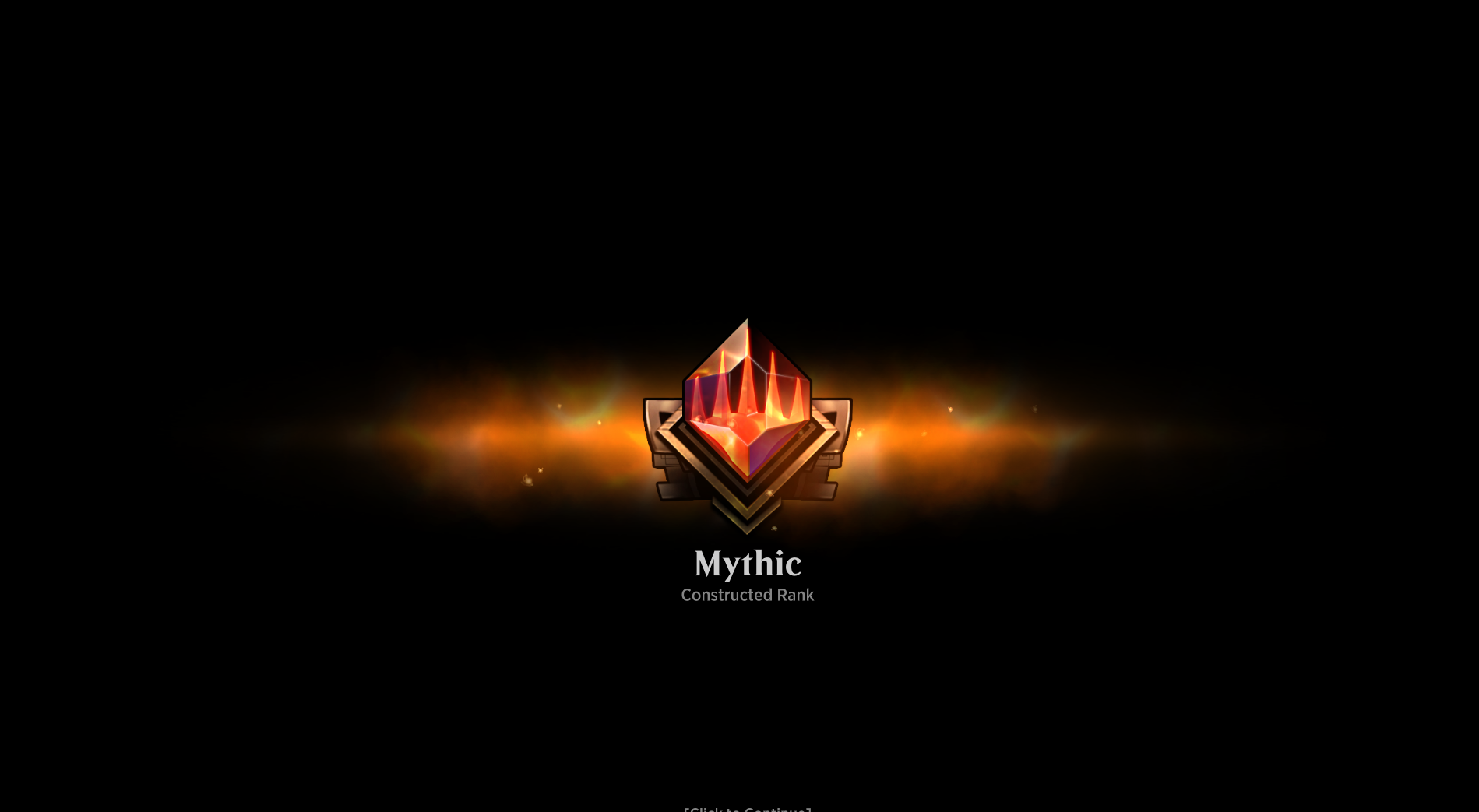 Damn, that was a grind. But it felt super rewarding especially as a free-to-play player since the closed beta, always struggling for wildcards to build the decks. I had never tried going for Mythic beyond the first month, when I realized what a grind it was. This standard format was also pretty dynamic, which meant the best deck changed constantly, so it was hard to be successful by sticking to one deck, which meant a lot of WCs are needed to be able to shift with the meta. I spent my gold on packs basically as soon as I got them, to build up the collection and WCs quickly. As you can see, I’m fairly poor: 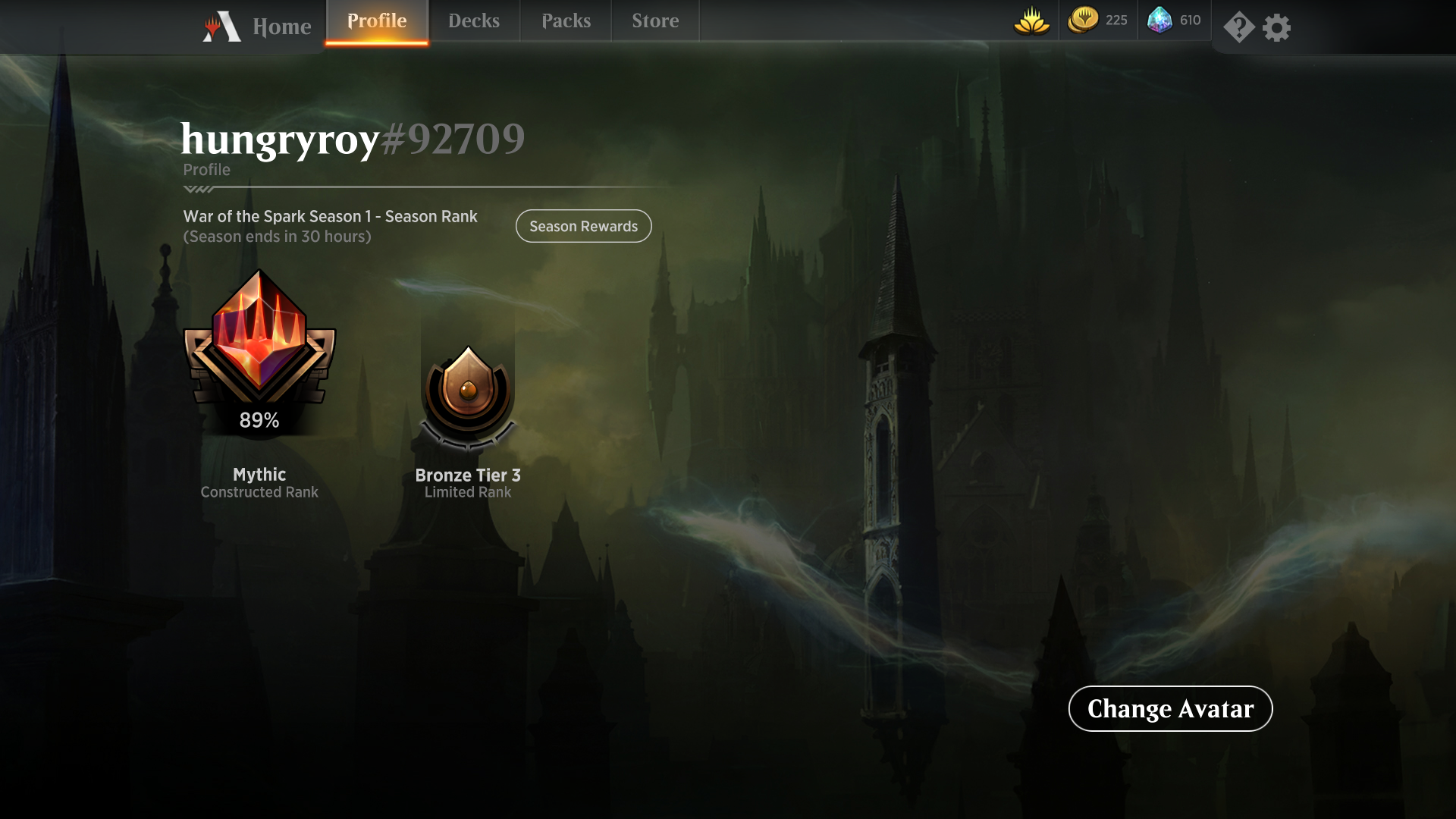 At the start of the month I was running an Esper fun deck, but that was only good enough to get me to gold. It eventually morphed into an Esper Planeswalker deck based on this tweet, which got me to Diamond. At that rank, I started having trouble with Gruul decks and 4c Dreadhorde decks. I switched to a slightly suboptimal Dreadhorde build (I didn’t have enough WCs to get all the Tamiyos), but even then I was frustratingly oscillating between Diamond 3 and Diamond 1 for as long as a week. I finally decided to try the new Golgari LD deck that came out recently (I only built it today!), and it finally let me make that leap from D1 to Mythic. Only 30 hours before the season ends and a couple of days before I fly out for more than a month (curse you Arena for not letting me play on a Macbook!)

(Someday I’ll fix my hugo templating to make these decklists prettier and include Arena export.)

As you can see, the list isn’t optimal. I based it off SRXtheVG’s 5-0 list at this link, but was missing quite a few rares, so I sort of played around with the list a bit. The Dreadhordes I just put in for fun, but I never got to play them.

Here’s some win-loss stats and meta snapshot, in case that interests you, care of MTG Arena Tool (which I only started using a couple of weeks ago, it was this data which told me to switch from Esper PWs!) 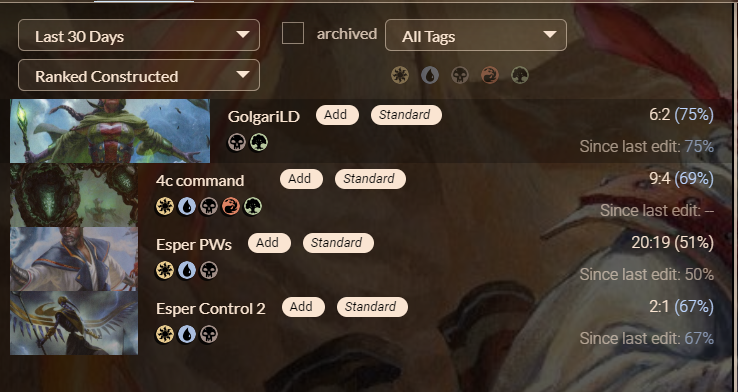 I’m not sure how accurate these game counts are, it felt like I did more matches with GolgariLD than listed here, but that may just have been frustration at the back and forth lol. And those win rates feel about right. I’m not sure if MTG Arena Tool picks up games from the logs if I forgot to run it during a particular Arena session, that happened a few times. But what is up with that Play/Draw% not adding up to 100%!

Anyway, I won’t be able to play Arena again until July, probably the meta will be completely different again by that time lol. For now, a welcome respite from the tyranny of the shuffler.

It’s great when I’m like “I’ll try a few more games of magic arena before going to bed, surely I can get back to Diamond 1 quickly” and the shuffler decides to smite me for my insolence