I’m not a big fan of theme parks. I think for the most part they are overpriced and not worth the time, effort or money. And I’d probably never go to one by myself or without one of my nieces/nephews. I understand the impetus of bringing kids to a theme park of course, they really enjoy it. Prior to this trip, I’ve only ever been to a theme park once, and that was in Unversal Studios Singapore with my brothers back in 2015.

This time we went to Disneyland in Anaheim and Universal Studios Hollywood. The kids with us were the nieces, 9yo and 3yo.

Visiting Disneyland reminded me of what a cultural tour de force Disney is in general. Kids from all the over the world come visit Disneyland and they instantly recognize and respond to all of these characters. When the nieces spot one of the mascots walking around they just shout out in glee and run up and wave to them. Yes, even the older niece. It’s not just the major Disney characters like Mickey and Minnie and Donald either. Kids respond well even to the minor characters or the obscure ones from random Disney channel shows. Disneyland really is for kids. (On a less Disney-branded note, I was also amused by how kids everywhere react the same way to bubbles being blown their way.)

Some highlights of the 3 days at Disneyland:

We did quite a number of other simpler rides (just the ones where you’re sitting and there’s a show going on around you), and picture taking with various characters. I don’t have many pictures handy to show here, but here’s me with Captain America: 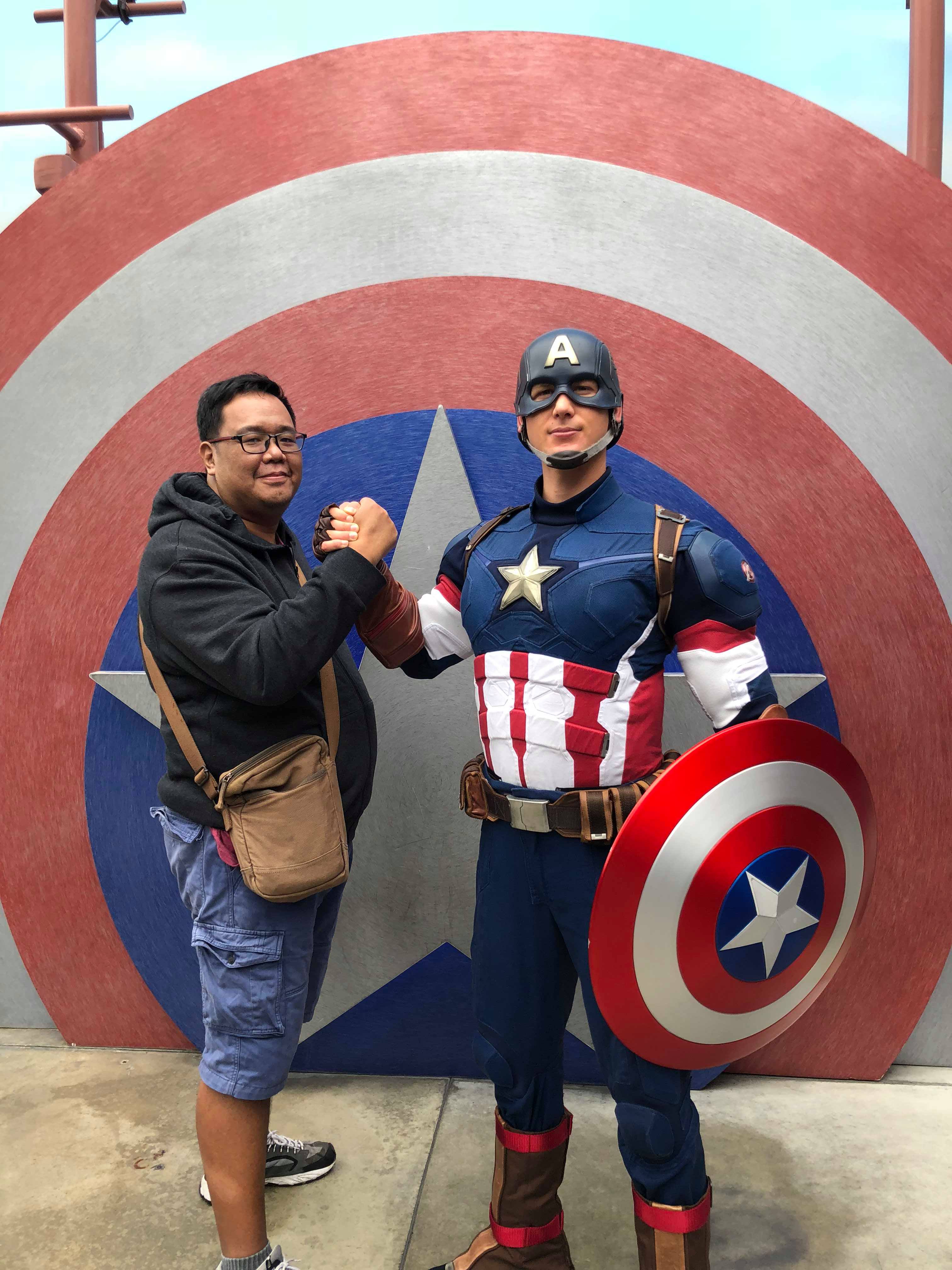 We didn’t do anything like roller coasters or that new Guardians of the Galaxy which goes up and down and stuff. The kids don’t like it, and I’m not sure I could either, tbh. There was also a lot of wandering around the mechandise shops of course, I’m sure they make a lot of money off all the toys. I ended up buying something my brother requested for my nephew, only to find it available again at another place for a cheaper price. Lol, I should learn never to buy stuff at theme parks.

After Anaheim, we took a short train over to LA, and we went to Universal Studios Hollywood. This theme park is not as kid-focused as Disneyland was, so the 3yo didn’t have as much of a good time, though she did enjoy seeing characters like the Simpsons, Harry Potter, and so on. The rides are also for bigger kids mostly - they’re the sort of rides that are full of high-speed movement, jumping and jerking around, some falling and so on. I only did the Transformers ride (which was the same as the one in Singapore) and the Minions ride, I already got a bit dizzy just from those two. I suspect the Harry Potter one was more intense (just based on the warnings), but there was like an 80 minute wait for that so we didn’t bother. I did enjoy walking around the Simpsons area and seeing all the references and the characters.

We also did the Studio Tour, which is really for movie geeks than anyone else, so again the kids didn’t enjoy it as much. The first part was a bit boring, just showing us the exteriors of the sound stages (basically just looking at warehouses). Things got a bit more interesting when they showed us some exterior locations, and there were a few parts where we got to experience a bit of a show . The “shows” were basically projected into a tunnel while our trams moved around. One was a Skull Island themed scene where King Kong was fighting a t-rex or such, and another was Fast and Furious themed which involved a high speed chase and jumping off bridges and such. There was also a special effects part where we were in a subway tunnel when an earthquake strikes, and there’s fire and suddenly the tunnel is flooded. I think the studio tour was the highlight for me.

We also attended the special effects show, a 30-minute show demoing various special effects. Again, the 3yo didn’t like it so much, especially in the parts where they pretended to saw off a volunteer’s hand or send the volunteer flying through space. It was fun for me though, and a bit informative as well.

We had also been planning to go to Legoland near San Diego, but it turns out the trip would’ve cost a bit more than we’d like, and online reviews said we might be disappointed especially coming from Disneyland, so we ended up not going. Instead we wandered around Hollywood boulevard and went to a few exhibits there - namely Ripley’s Believe it or Not, Guinness Book of World Records, and the Hollywood Wax Museum. The Guinness one was the best of the three, as there were a bunch of interactive games and exhibits that we enjoyed. The 3yo didn’t like being in the Ripley’s or the Wax Museum as she was a bit scared of some of the exhibits. Ripley’s had some creepy and weird stuff, including a couple that made the 9yo scream and run in surprise. I did like some of the displays, like the model of Minas Tirith made entirely of matchsticks, or the Darth Vader made out of car parts. The Wax Museum was nice, but didn’t have much and was over too quickly.

Overall, the theme park experience was fun. Still not changing my view that they are overpriced, and since I don’t have kids, I may never go to a Disneyland ever again, but it’s probably good that I got to experience it at least once so I know what I’m talking about!