After playing through Super Mario 3D All Stars in October, I borrowed a copy of Super Mario Odyssey for the Nintendo Switch from my brother and played through it for most of November. Odyssey was the main reason I actually got a Switch; I played through a few worlds at a friends house during a single session and loved it, so I had been meaning to get the console just for Odyssey alone.

The game deviates a bit from the formula established by Mario 64, Sunshine and Galaxy; Instead of a single hub that leads to small mission worlds, there are a number of different kingdoms, each of which have different residents. The plot is standard Mario fare; Bowser kidnaps Peach because he wants to marry her against her will (and apparently there’s nothing she can do about it?! You can say no girl!) You visit each kingdom in turn as you chase Bowser across the world.

Each kingdom is a self-contained “open world” where there are many challenges you can complete to advance the story. Completing challenges earns you Power Moons (the analogue to 64/Galaxy’s stars and Sunshine’s shines) which ostensibly power your ship, the Odyssey. Examples of the Kingdoms are the Metro Kingdom featuring New Donk City, whose mayor is the girl you rescued from Donkey Kong so long ago; the Woodland Kingdom is populated by flower-growing robots; the residents of the Seaside Kingdom are slugs! 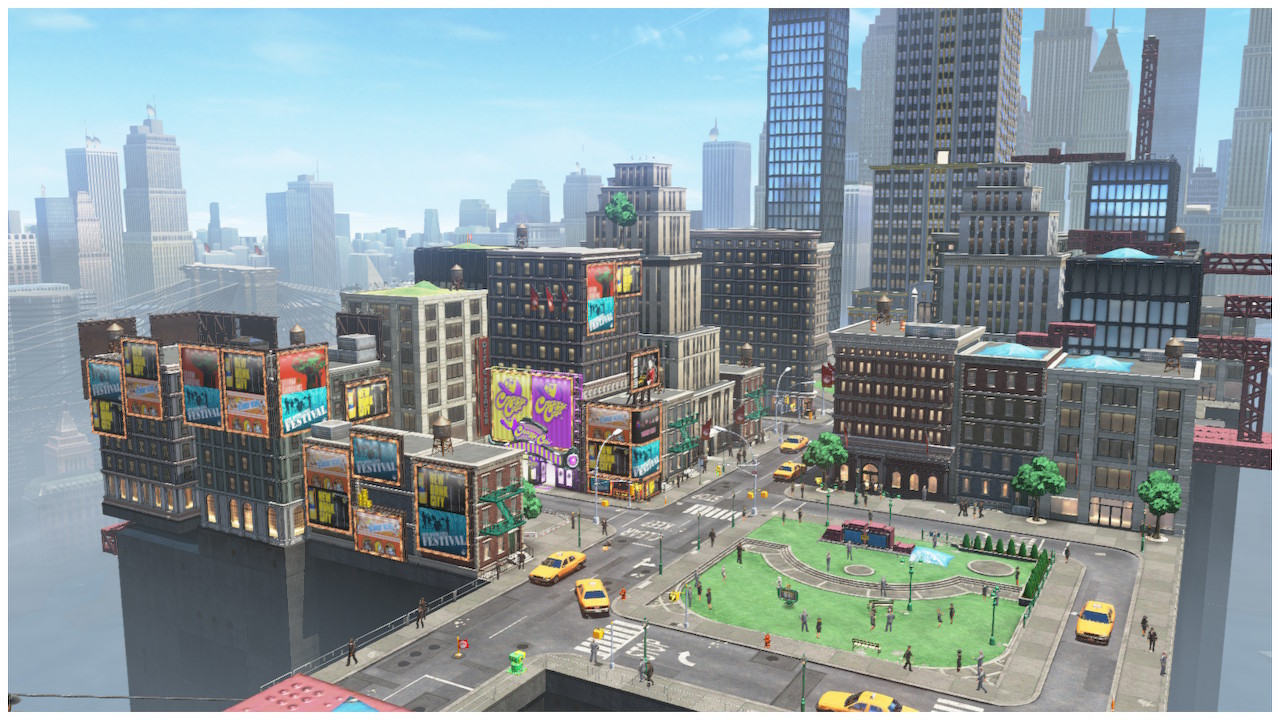 It's so weird when you're in this city, as every else has more human proportions 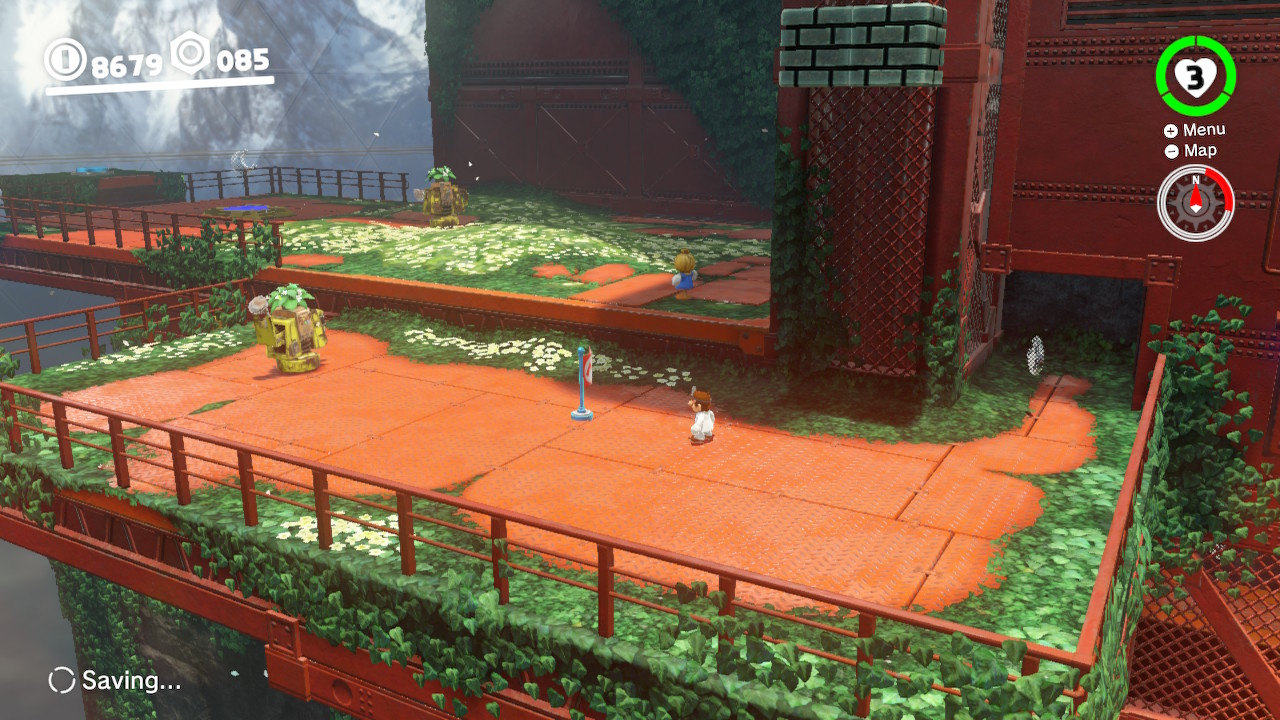 This is the woodland kingdom 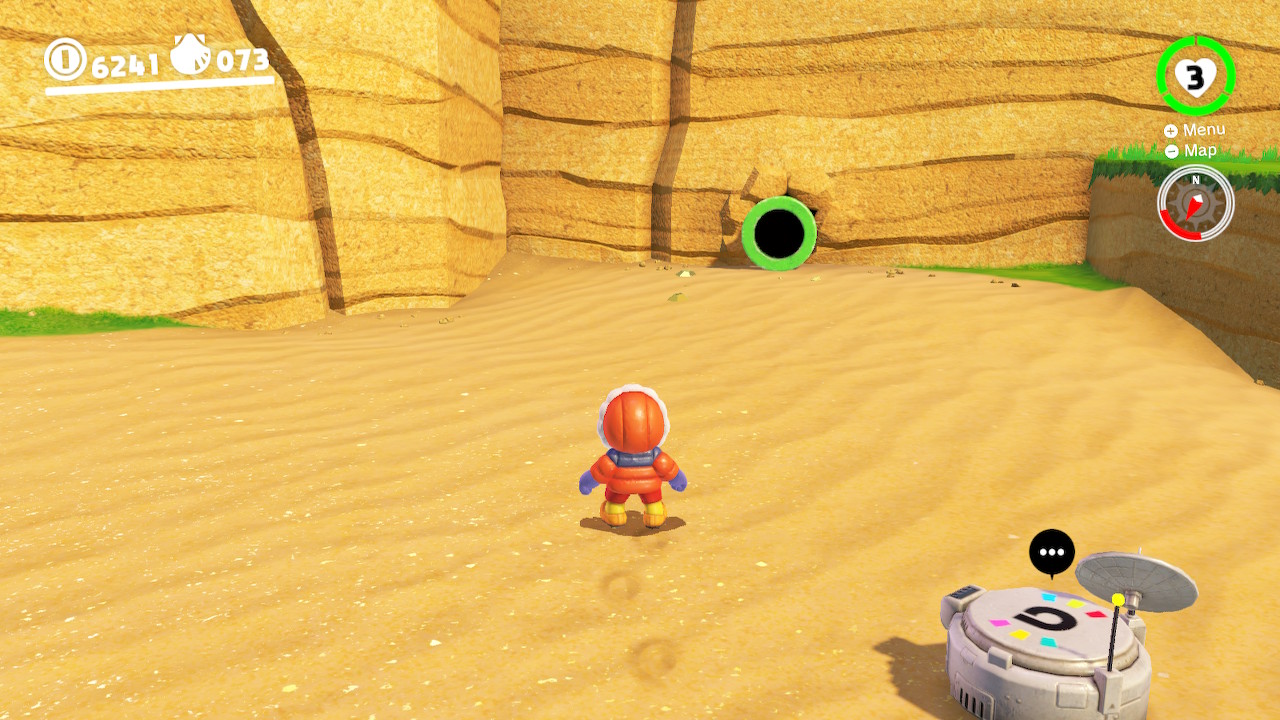 Mario wearing a parka at the beach

I actually finished the main story after around a week of play. It’s fairly straightforward, not especially challenging. 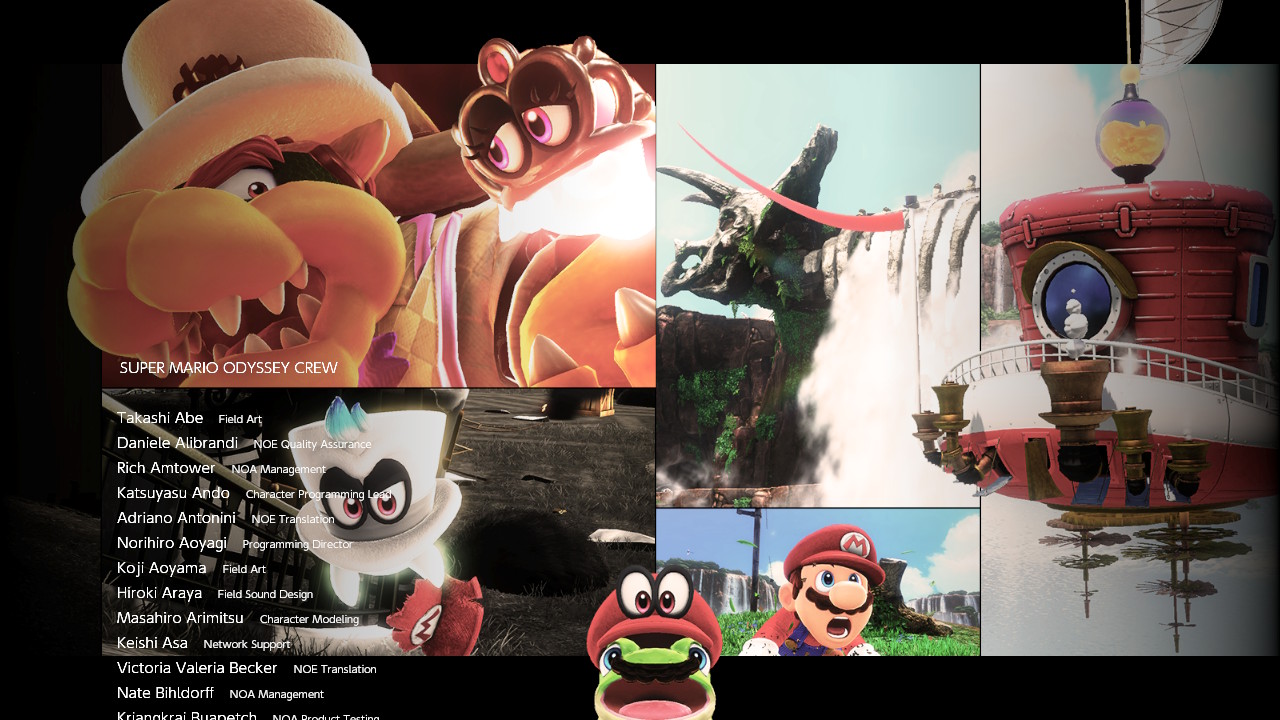 There is however, a lot of post-game and completion stuff to do, that took me another couple of weeks and change. Odyssey’s completion revolves around collecting a rather large number of Power Moons. A good chunk of them are only available after beating the main story, though I did try to get as many as I could even before beating Bowser. And some worlds like Peach’s Mushroom Kingdom and the more challenging Dark Side/Darker Side of the Moon are available only in the post-game. 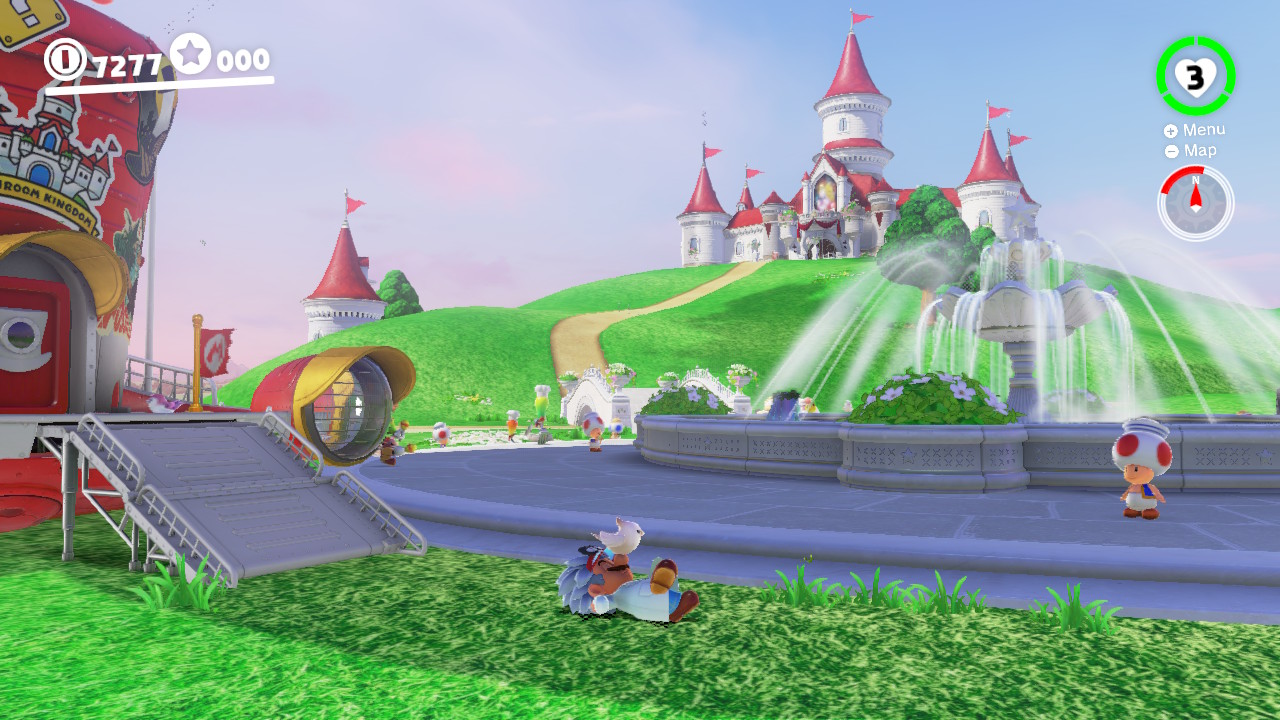 After you finish the game you get to relax in the mushroom kingdoom.

My favorite parts of the game are these segments where Mario becomes a 2D Mario and you have to play 2d Mario stages in 8-bit style, they appear in the open world as murals, often hidden, and they’re really nice throwbacks. They even made 8-bit versions of each Mario costume!

Completion is a real challenge. There are much more difficult platforming challenges involved, and some moons like the Koopa racing ones will require you to master advanced moves and jumps to beat them. There’s also a whole lot of minigames to complete, moons hidden using art-based clues, and a whole lot of collectibles (including hats and costumes for Mario) that you can purchase from stores using coins and regional currency that you collect. I played most of the game in handheld mode, but there are some moons that are easier to get using motion controls, which requires you detach the joycons, so that’s something I sometimes had to do. 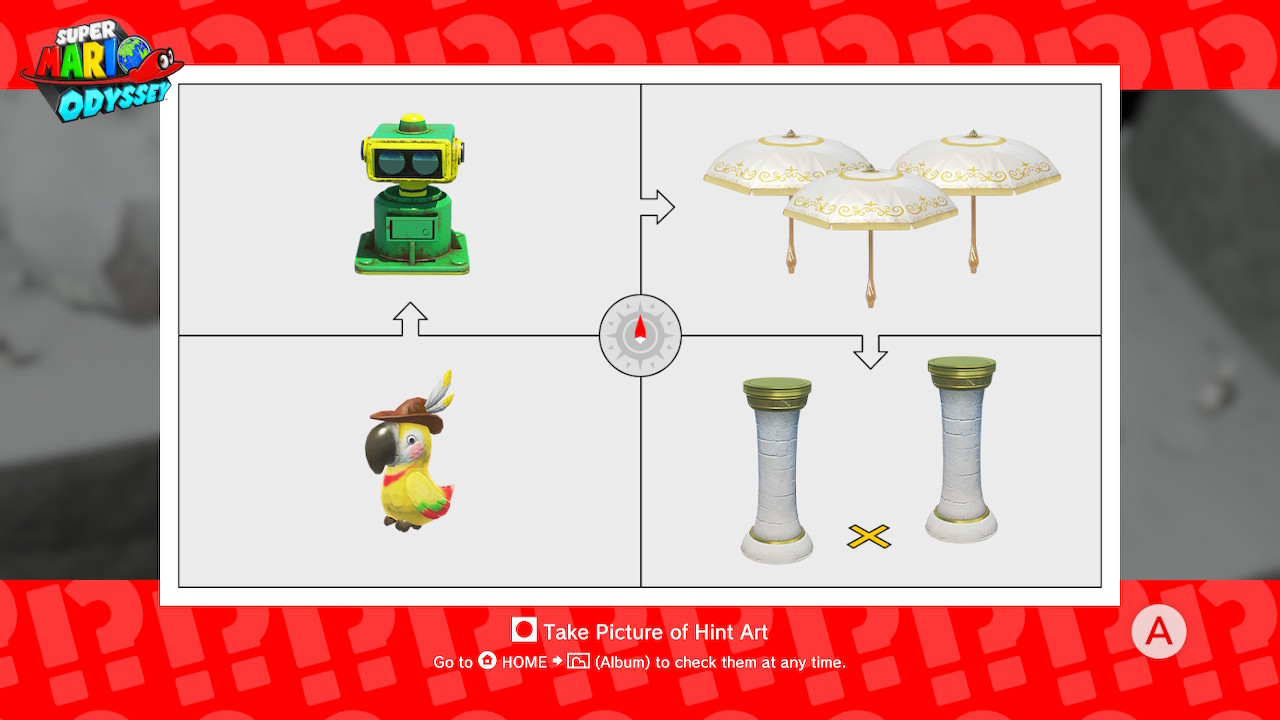 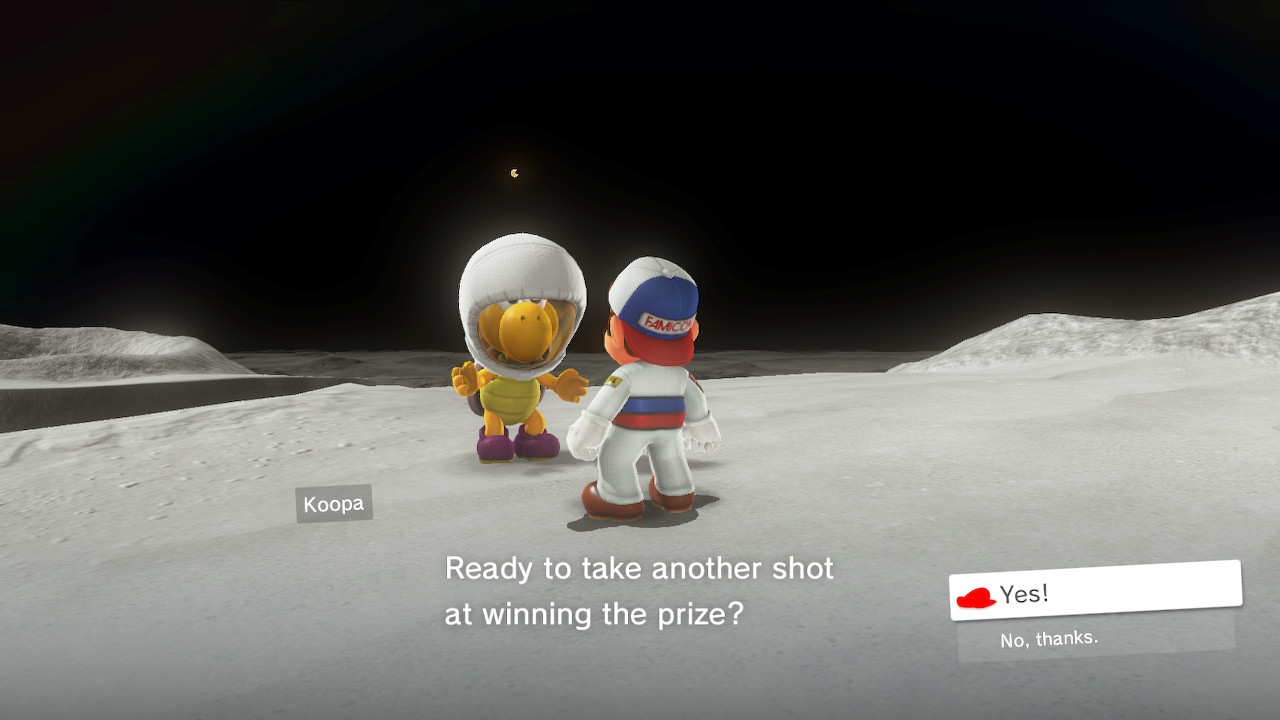 Mario doesn't need to wear a helmet on the moon, but this Koopa does 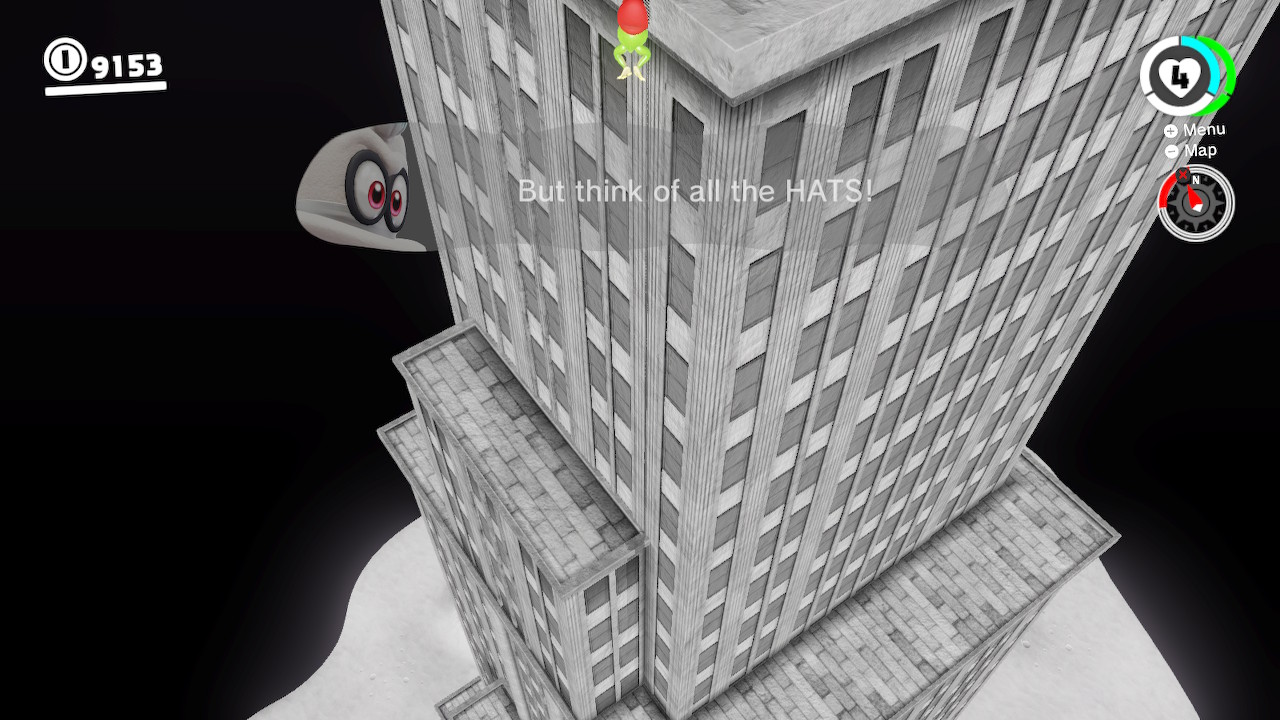 Maybe there's a big Team Fortress fan on the team?

So far I’ve managed to get all but 7 of the unique 880 collectible moons. The 7 I missed were 5 for minigames (100 jumps in jump rope, 100 volleys in beach volleyball, and 3 bound bowl races) and 2 stage moons (for Breakdown Road in Dark Side). While none of these seem impossible to do, they all seem like they require much more patience than I am willing to give, so I’m satisfied with this completion rate for now. 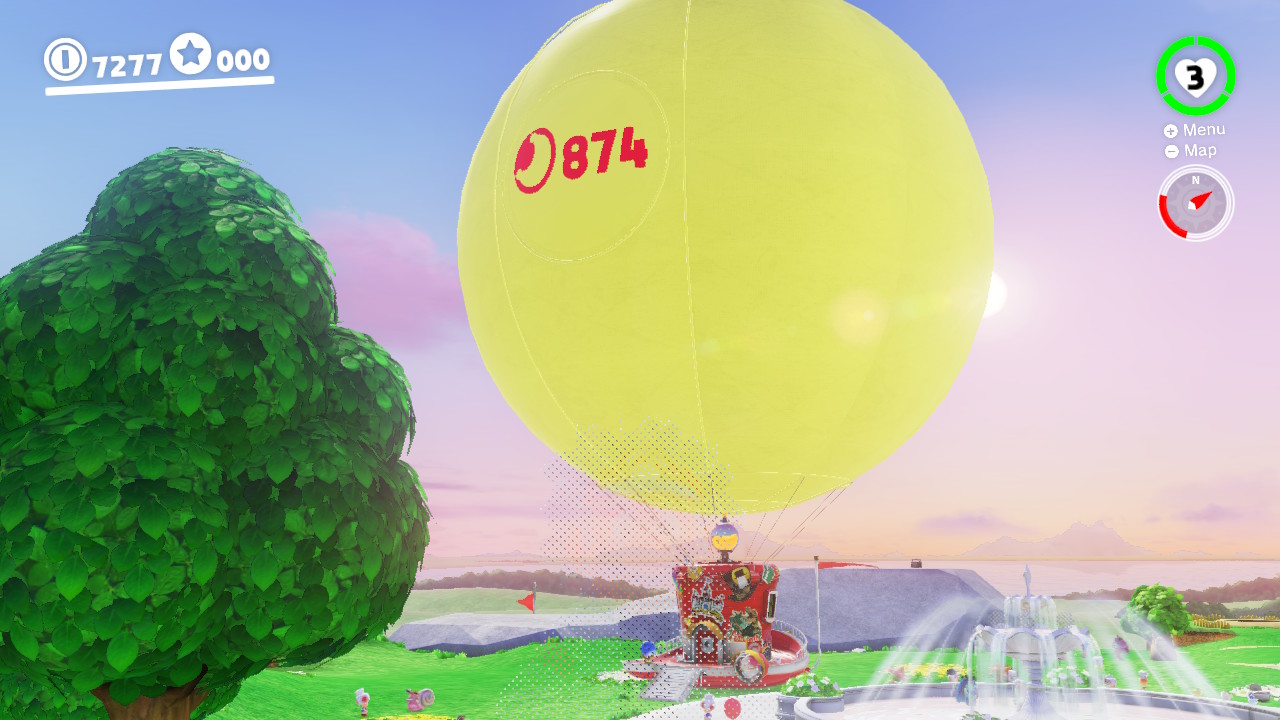 It's 874 because I bought an extra moon at the stores for some reason. 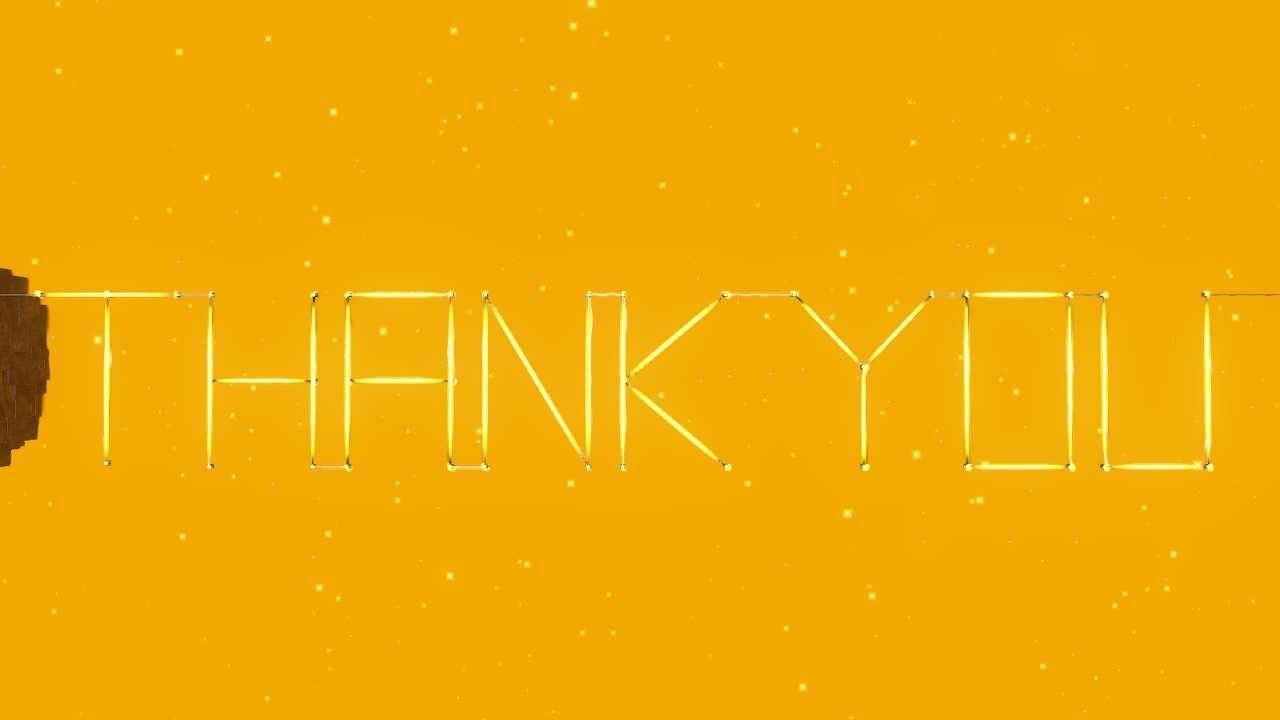 You get a THANK YOU for finishing the Darker Side challenge

My only complaint is that at some point I found going for completion to be super tedious, especially with those last few moons. 880 moons is a ridiculous number, compare that to a paltry 240 stars in Galaxy. This might be a case of there just being too much stuff? I realize this is a weird thing to complain about. Overall it’s still a fun and engaging game, though I’m waffling over whether this one or Galaxy is the better game. (I probably still like Super Mario 3D World over either though!)