A while back, on a whim I purchased this indie game Knightin’ on Steam. I forget how I came across it and why I decided to buy, but no regrets. It’s a tightly-focused dungeon crawler in the style of original Legend of Zelda/Link to the Past dungeons.

Each dungeon is a set of rooms you clear one at a time, until you get to the dungeon boss and beat him. Clearing rooms involves defeating enemies, solving puzzles, avoiding obstacles and opening chests. It’s a short game, there are only four dungeons to clear each slightly more difficult than the last. There is no plot at all. The game itself openly admits this by painting the thinnest of flavors. You play Sir Lootalot and you want to beat the evil dark lord at the end of the fourth dungeon. For treasure! No princess to save or anything like that.

When I say “tightly-focused”, I mean that the game is barebones and does only what it says, but it does it very well. I’m a fan of how well-designed it is. It’s entirely predictable, you know what you’re getting into, but each part is executed really well. Each dungeon consists of multiple floors. Each floor has exactly twelve rooms, arranged in the same 3x4 rectangle shape every time. There’s a minimap that never changes shape, but maps room paths as you go. The minimap has a nice notation that indicates things like stairs up, stairs down, a merchant, a warp point, etc.

Combat is simple and straightforward as well. You don’t get a plethora of weapons like Link does in the Zelda series. You start out with a sword (obviously) and later you get access to a wand that lets you shoot fireballs, and those are your only weapons ever. Later you also learn to dash (which hits enemies with the sword), fire dash (which leaves a trail of flames as you dash), and learn a spin attack (a la Link to the Past). You only ever have to remember four buttons: swing sword, shoot wand, dash, and raise shield (and I very rarely use the shield).

Obstacles in your way include enemies of course, and the difficulty ramp is great here as well. You start out with enemies that just walk around randomly and they damage you if they bump you. As you progress you meet more complicated foes. Enemies with ranged attacks. Enemies that chase you. Enemies that can move faster. Enemies that can pop out from under your feet. Enemies that can reproduce. And so on. They are always introduced one new enemy at a time so you get to know their shtick before you meet them in more difficult rooms. Rooms can also have obstacles, such as blades that suddenly jut out of the ground, rotating saw blades, pillars that shoot projectiles, and so on, all adding to room difficulty. Some rooms will have a merchant who sells stuff (you get gold from enemy drops), or chests you can open. Everything is pre-placed, no procedural generation here. 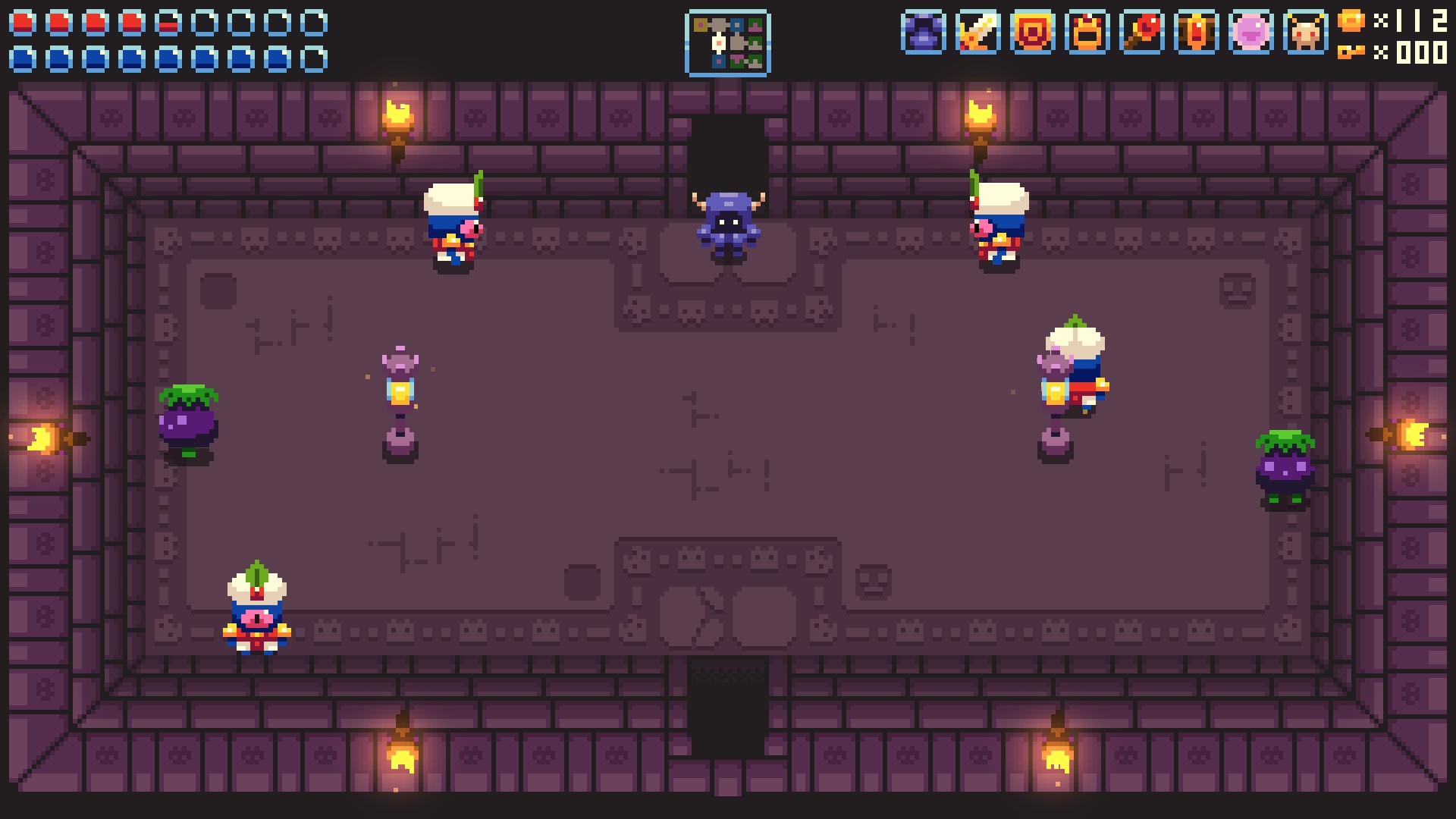 Later rooms contain multiple enemies of different types and some dungeon mechanisms too. 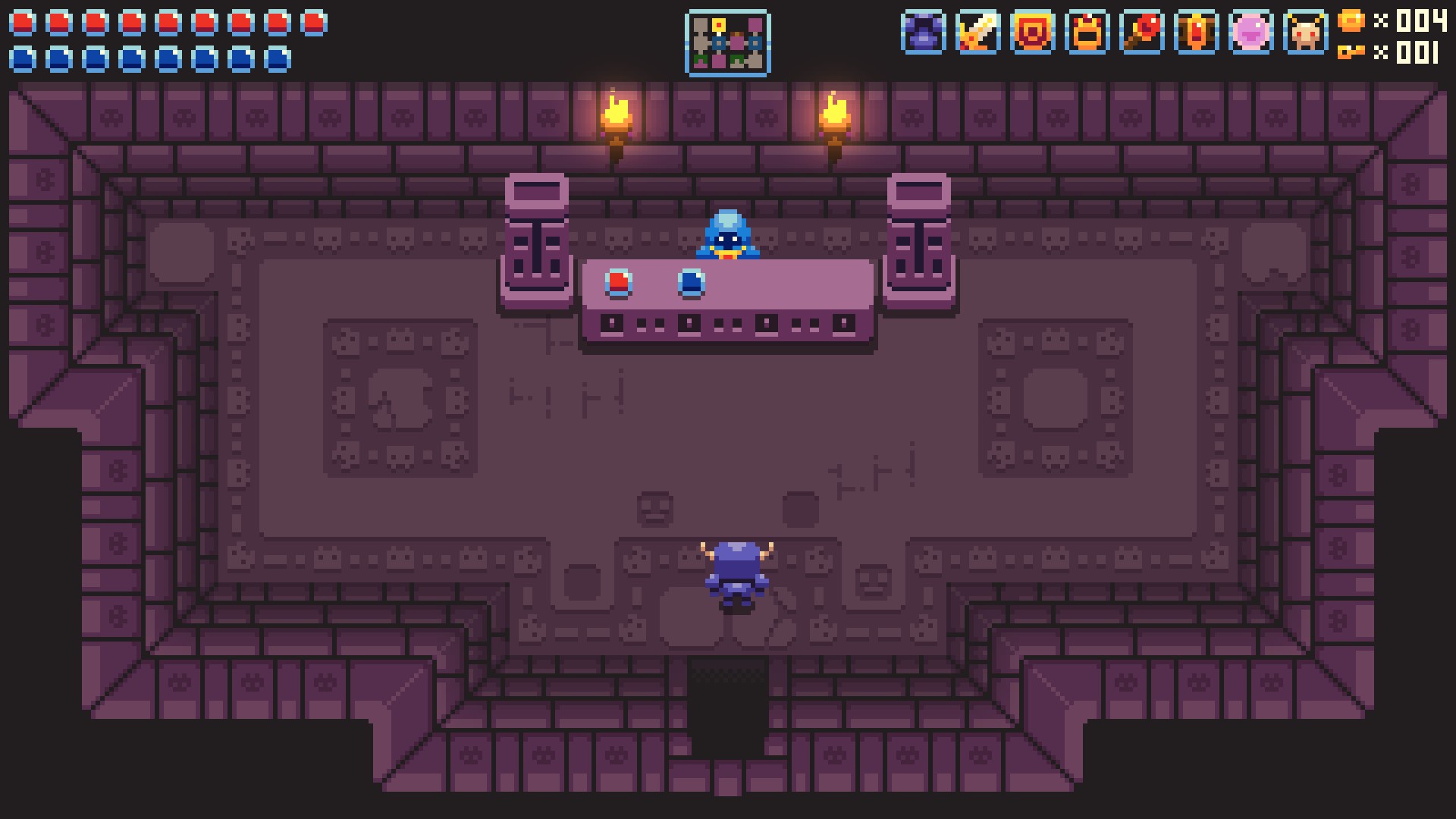 Each dungeon has a merchant named Mr Businessmage, he sells healing and various upgrades.

Later floors will have pillars which act as obstacles that you have to unlock to progress.

There are also some puzzle rooms, which come in two types: 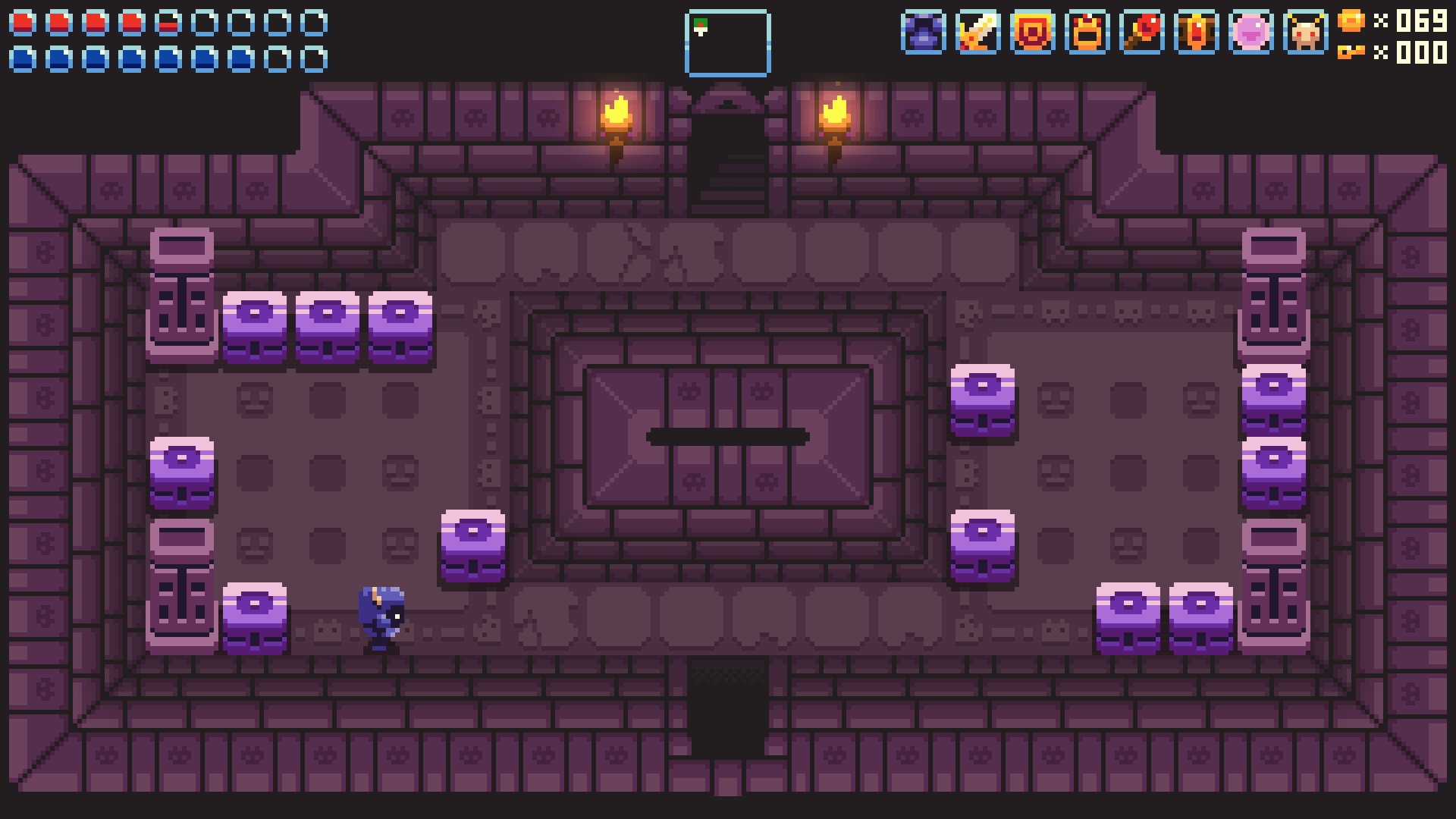 An example of a hint for a switch puzzle room, found by moving blocks around. 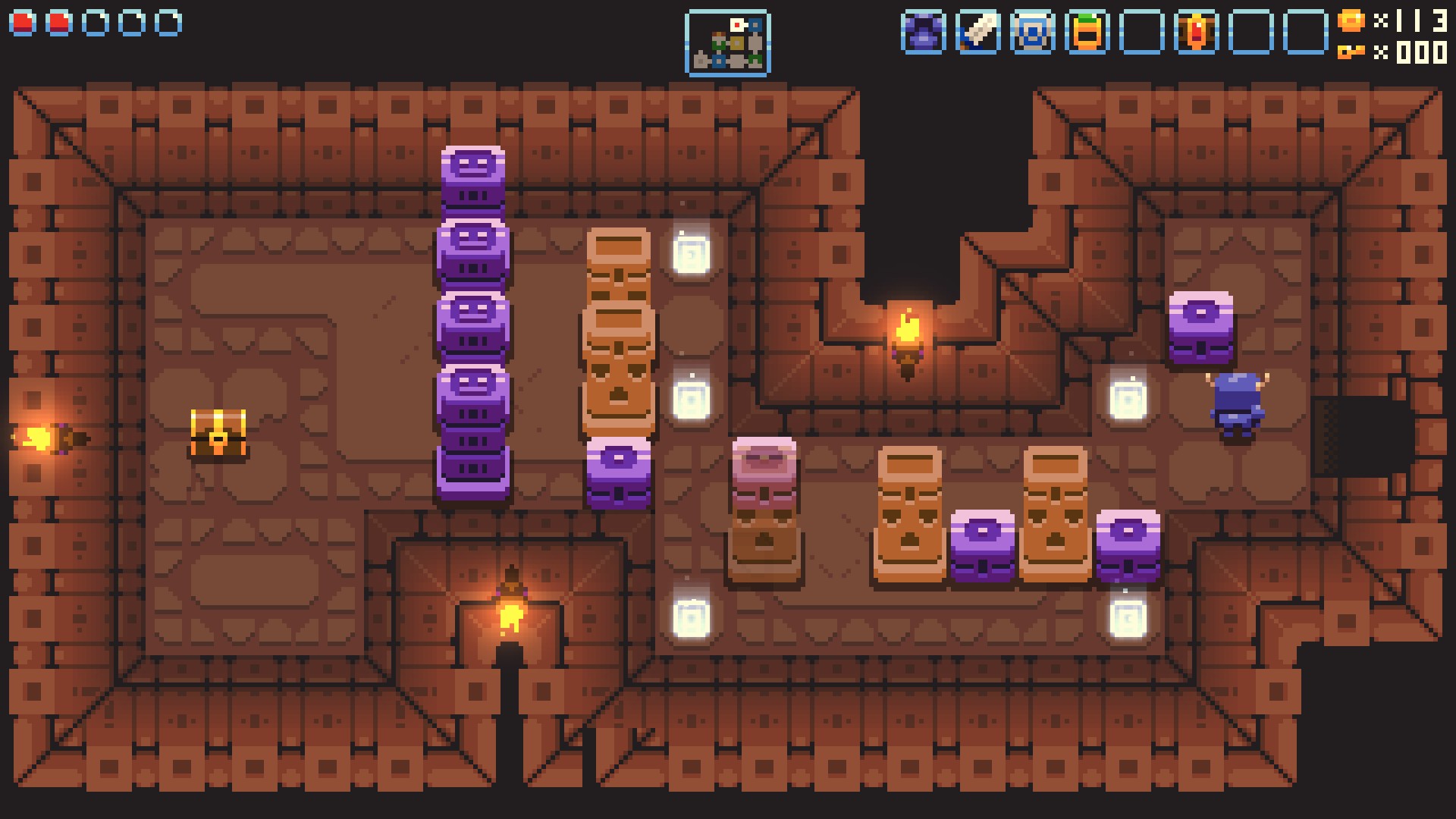 This particular block puzzle gave me some trouble. You have to push the blocks onto the lighted tiles.

Achievements. Completion in this game is largely straightforward as well. Most of the achievements are geared towards acquiring all the upgrades, opening all chests, and beating all the dungeons. The only two I didn’t get (and probably won’t bother to) are for doing a speedrun under 90 minutes and for doing a no death run. I tried a couple of post-game runs, and I’m sure I can do both of those after some number of tries, but I think I’m way too lazy for that. I’ll leave it installed and maybe someday I’ll get around to it. 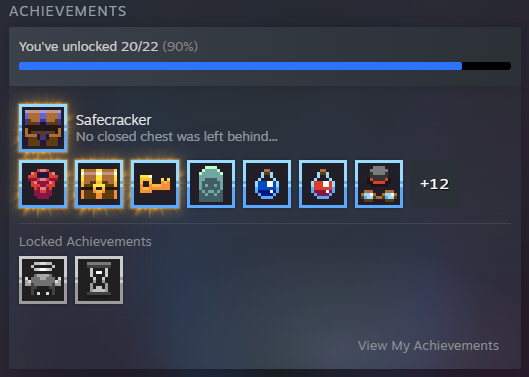 Overall: A very tight, focused, well-designed and quick indie game experience (my total play time so far is less than 3 hours). It’s relatively cheap on Steam too. It’s not super groundbreaking or anything, but it’s worth it for a couple of hours of entertainment.