My previous post only skimmed my trip to Europe. I did not want to write too much, partly because I was uncertain at how many would be interested to hear the sordid details and partly because while I was writing the post, the words did not flow as freely as I would have wanted. Despite this, I have received good feedback and more than one person had asked for more details. So here we are.

The three of us arrived at the Barcelona airport around ten in the morning and from there took a metro train to the Barcelona Sants station. One of the first things I noticed (aside from the brownness of the buildings as the train rode into the city proper) was the vast amount of colorfully-lettered graffiti that can be seen on many walls as the train passed by. This sort of graffiti would turn out to be common not only here but in Paris and Rome as well (though not as much)

From the station our hostel would be a short walk, but first we hunted around the Sants station for a place to eat. We looked at some signs for the McDonald’s inside the station before deciding we wouldn’t be having any American fast food for the duration of our trip. We ate at the adjacent restaurant instead, taking in an assortment of breakfast foods on some sort of combo plates. We didn’t have too much language trouble even though the staff spoke no English. Although the local language is Catalan, most of the locals will speak or understand Spanish, and we spoke and understood a bit of Spanish ourselves.

We stepped out of the station to a crisp windy afternoon, with the temperature a bit under 10 degrees. I was worried that my hoodie might not be able to handle the expected cold Europe weather but I held up fine so far. We walked around a bit a midst crowds of skateboarding, rollerblading and scooter-riding youths before figuring out where we were supposed to go for the fifteen minute walk to our hostel. We walked through what a quaint area with a wide open space in the middle of the road for pedestrians – such a thing seemed impossible back in crowded Metro Manila. Many of the storefronts were closed, probably for the weekend, with their metal security grills lined with the same style of colorfully-lettered graffiti I saw from the train.

For this leg we would be staying at Free Hostels Barcelona. The lady at the reception was very friendly and her English was quite good. She answered most of our questions and handed us a few tourist friendly maps that highlighted many of the places we could visit in the city before showing us our rooms. It was a dormitory-type room with four beds and storage units, a bathroom and not much else. One of the beds was already occupied, she said, so the three of us would be sharing a room with a stranger that night. (Spoiler: we did not get murdered in our sleep)

After resting up for a bit, we went out to spend the afternoon taking in a bit more of the city. We made our way towards the nearby Plaza España; the friendly hostel reception lady told us the mall there would give us a good view of the city from the top floor. On the way we passed by what one of my companions called out as a “giant penis”: 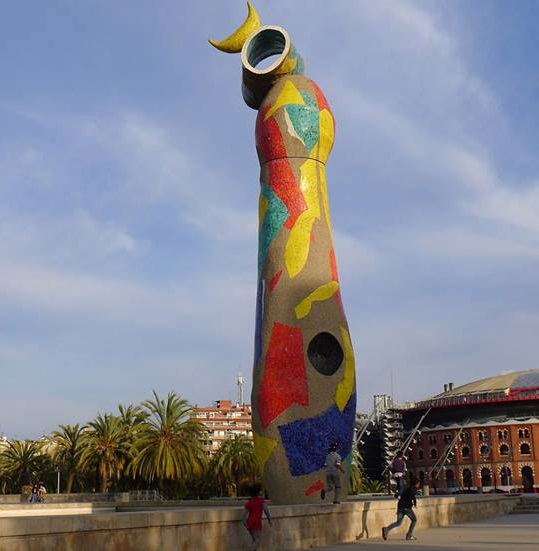 We climbed to the top of the Centro Comercial de las Arenas, which I found comparable to a small mall back home with mostly high-end shops. The circular rooftop was an open-air area that gave a good view of the nearby city and some fancy restaurants that we thought of eating at but never managed to get back to. 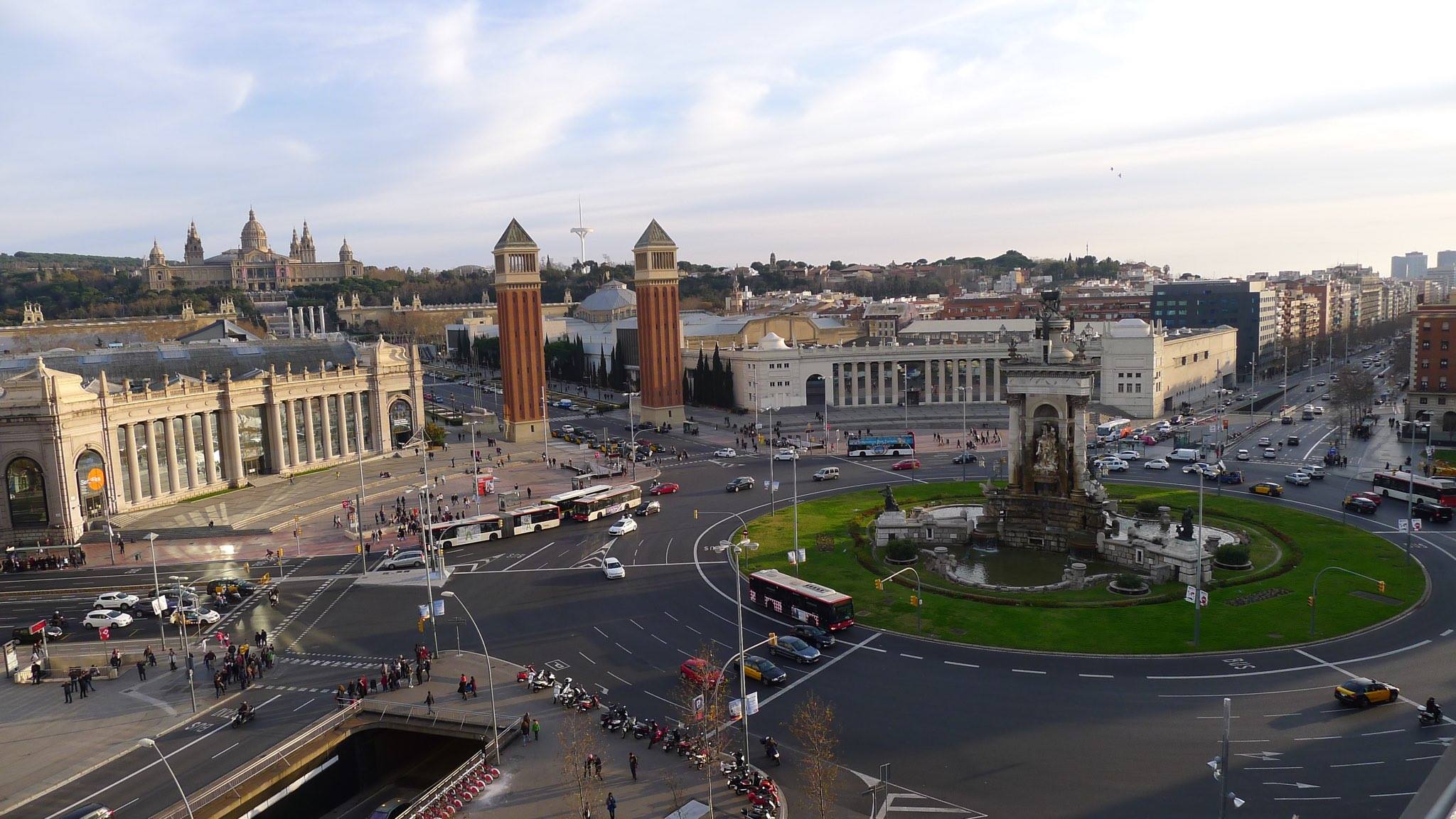 We decided to head towards that large building in the distance (I believe it was some sort of museum) since friendly hostel lady told us there was a nice fountain show there we could see. On the way we got distracted by this street performer doing bubbles. 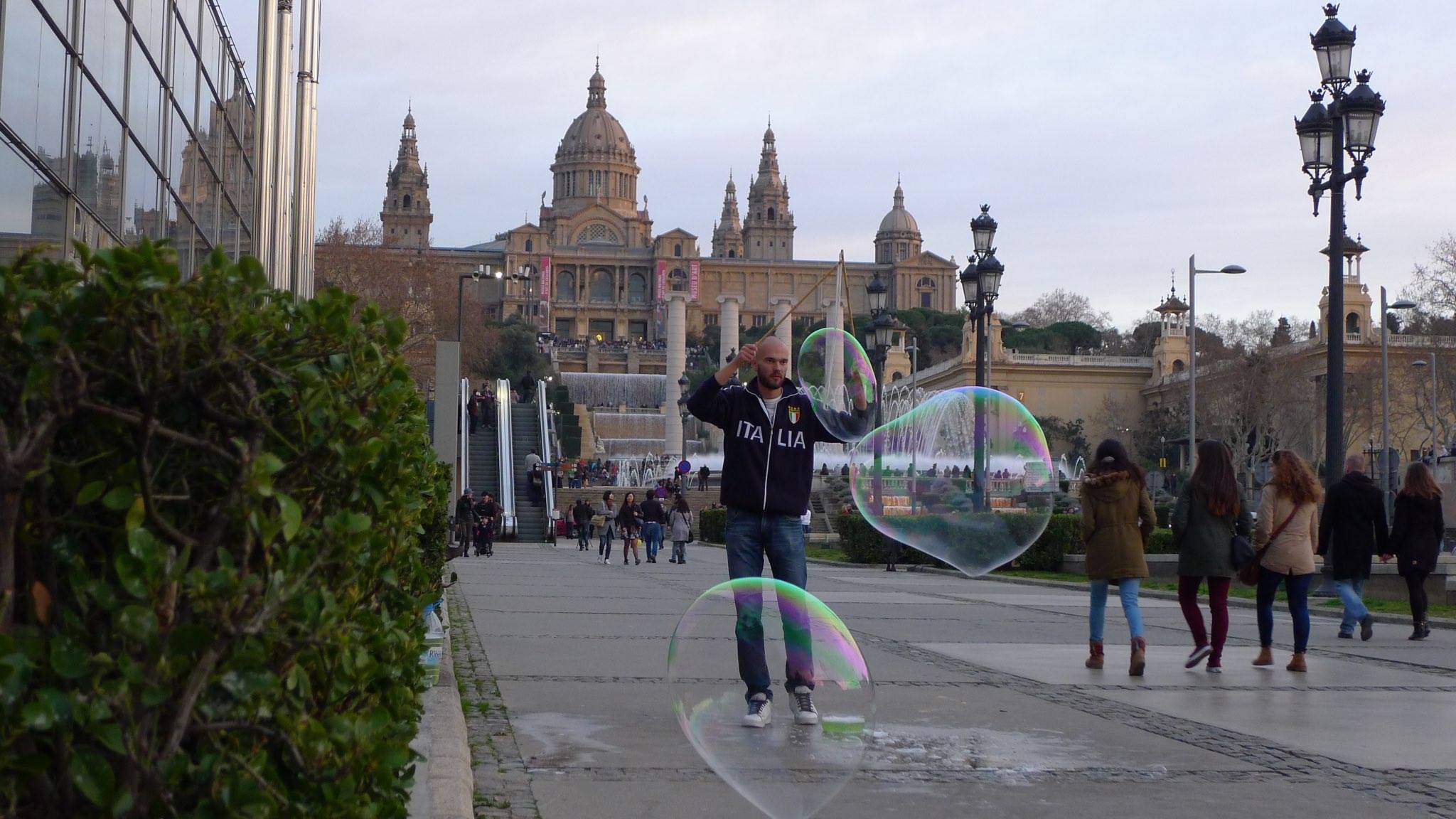 Since we were a bit too early for the fountain show, we sat there for a while to take a break from all the walking and let ourselves be entertained by the large bubbles and the little kids enjoying them. He was using two short sticks with some rope entwined to catch some of his soap solution and he would let the brisk wind create the large bubbles. “I should try this back home, the niece would enjoy it.” (Spoiler: I haven’t tried it)

Shortly before 7 pm we went to the fountain area where there was already a large number of people gathered around the nearby steps and other seating areas in anticipation of the show. There were street performers entertaining some sections of the crowd with some sort of dance-off, but the fountain show began before they could come over to our side. 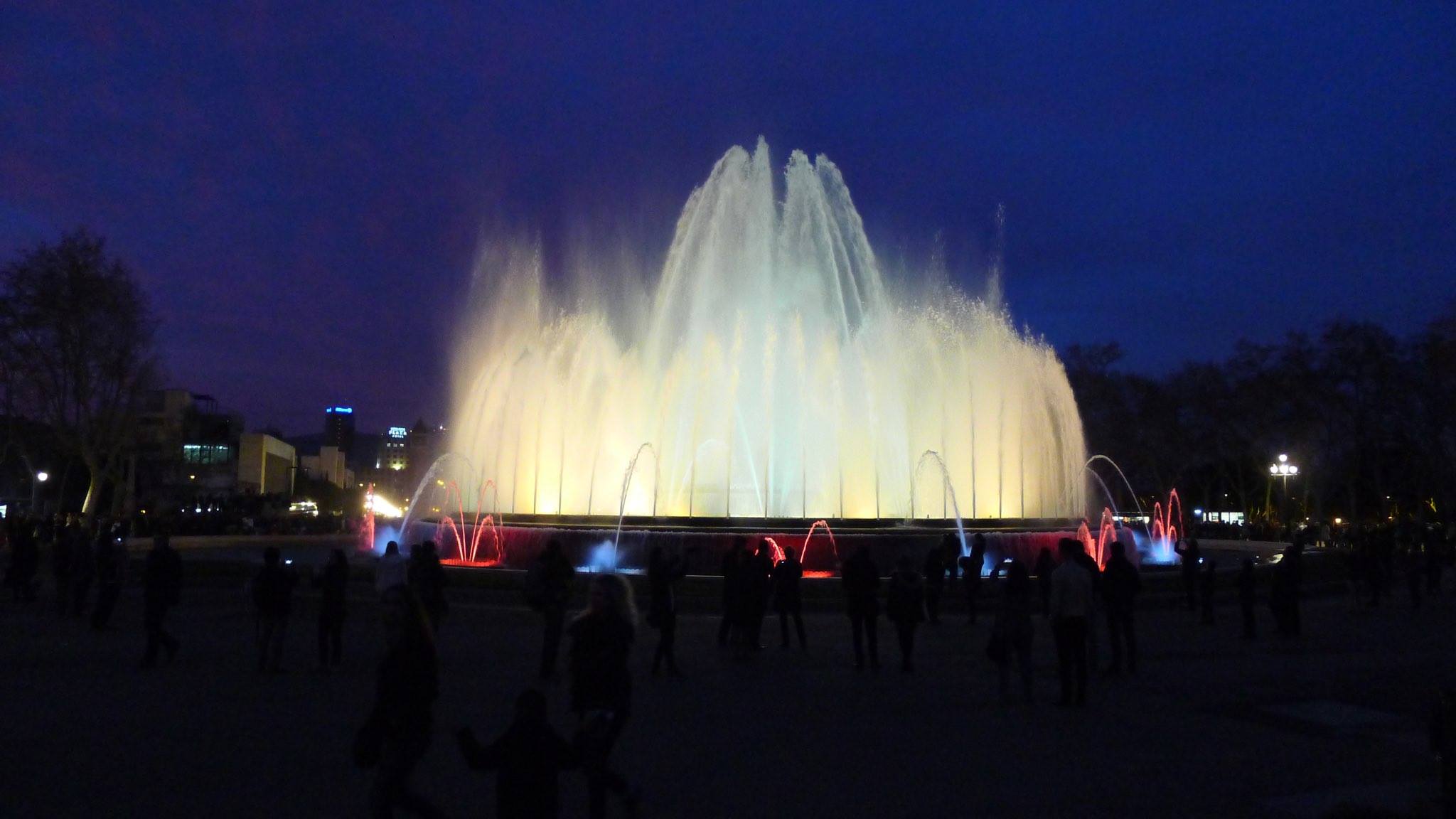 The fountain show was some sort of preprogrammed series of lights and changes in the fountain heights and angles against a backdrop of someone who sounds like Freddie Mercury singing something that starts with “Barcelonaaaaaaa~” The show was very good, I don’t believe I’ve seen anything like it locally (but then again I don’t see fountain shows too often). Imagine, I said to myself, somewhere out there are people who design these shows for a living.

We enjoyed the show a bit longer before deciding to head back to the hostel to get an early rest after the long travels.

I woke up earlier than my travelling companions and headed out to the hostel’s common area to check out the free breakfast. Breakfast was cold cuts of ham and sausage, slices of cheese, bread and croissants with various spreads and some juice. Nothing too fancy (i.e. no bacon), but there was lots of food for us to enjoy. The spread would be the same every morning, and it meant we could load up on breakfast so that we don’t have to spend too much on lunch and dinner.

It was Sunday and as a Catholic I was planning to hear English mass. As far as I could tell from the internet, the only place to do that was the Parish of Mary the Queen at 10am. One of my companions wanted to hear mass in Spanish and the other one was planning to attend a football match around noon, so we separated for the first half of the day.

The church I wanted to go to was around 3.5 kilometers away, a 40 minute walk according to Google Maps. I allocated an hour and a half to walk there at a more leisurely pace. It turned out to be a good call, as Google Maps didn’t tell me I’d be walking up a bunch of inclined roads (these wouldn’t be the only inclines I’d have trouble with in Barcelona… ). I passed by mostly residential areas, with small parks every few blocks letting me take a few minutes break when I needed it. 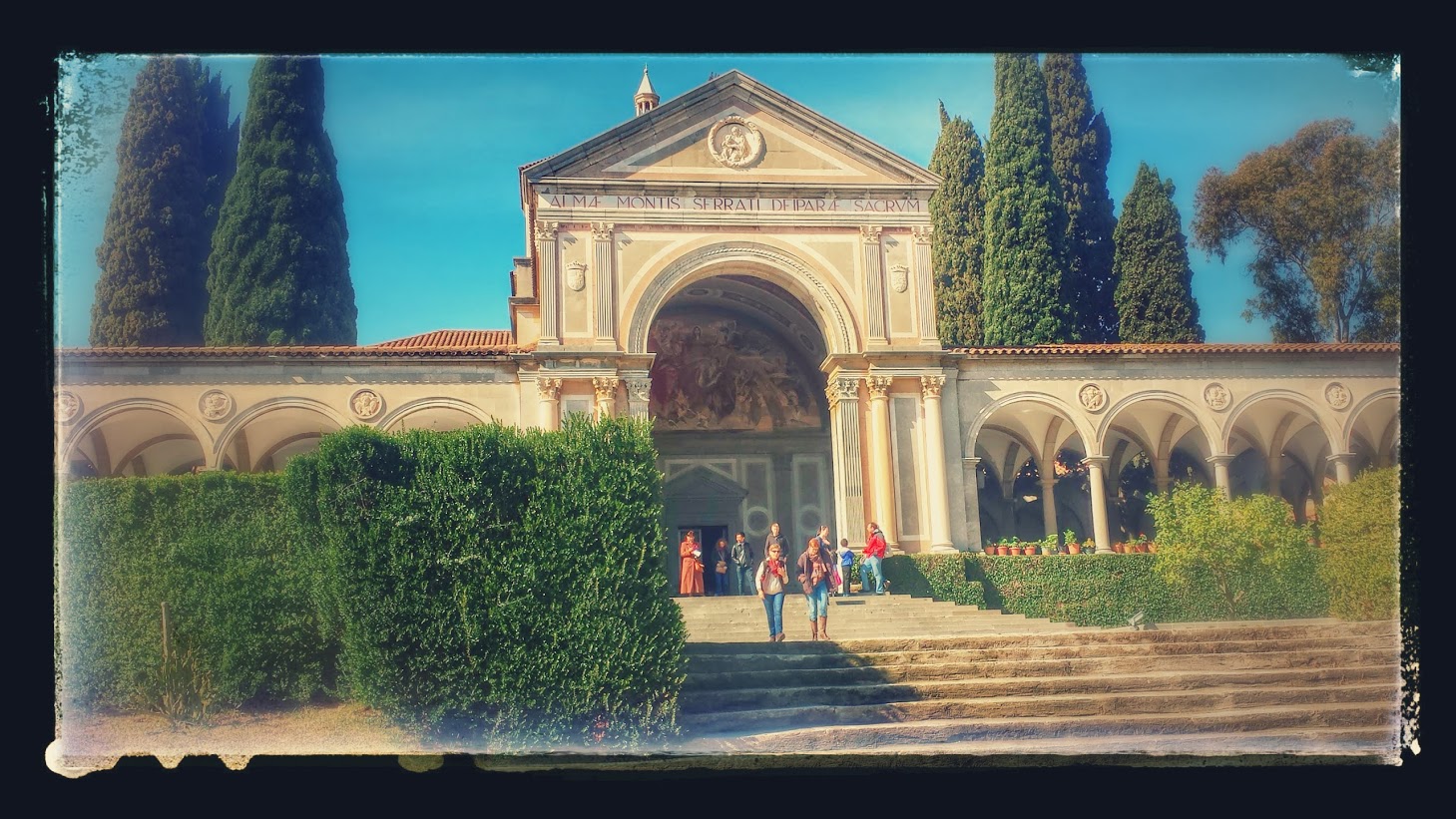 I was greeted at the church entrance by some white folks who were waiting for the mass to start. The church itself wasn’t too large, it was maybe a third the size of where I usually hear mass back home. There weren’t too many attendees, maybe around 50 people at best, which is less than I would have thought given the large Catholic population in Spain, though I guess most of them hear mass in the local languages. Most of the attendees seemed to be locals instead of expats; for some reason I was expecting a larger Asian/Filipino presence, maybe based on when I heard mass in Hong Kong or Singapore. The priest was very friendly and would greet each mass-goer as they left after the service. He even gave me a “good job!” with thumbs up as I went out, not sure why 😀

Friends know I enjoy a good quiz night, and my travelling companions were no different. So for Sunday night, we planned to attend an English pub quiz at the Black Horse Pub, roughly an hour’s walk from our hostel. We met up again late into the afternoon and headed out on foot (we liked walking, apparently). Along the way we enjoyed the fancy-looking buildings that lined the major roads. There are apparently no skyscrapers in Barcelona, most of the buildings we saw were maybe five or six stories high at most, with most of them being old-timey buildings lined with fancy ornate facades and some with random minarets or towers at the top. Any time we passed by an obviously modern-style building it looked hilariously out of place.

We decided to walk along the Via Laietana, a thoroughfare famous for buildings with different kinds of fancy architecture (I am too ignorant to name them). Aside from the buildings and their architecture which I am surely unqualified to describe, the street itself had a wide middle island for pedestrians, the island lined with trees that looked like they were groomed to look similar in branch structure, recovering from winter. The middle island held a number of outdoor seating areas for the nearby restaurants, a common thing in Barcelona. We debated having some paella right there, since that’s the famous dish in the region, but the menus here were a bit pricy so I suggested in Tagalog that we look for some cheaper alternatives later near our hostel. As chance would have it, one of the restaurant staff we passed by overheard us and I heard him say behind us we walked away “Mura dito!”, leading me to comment about the innate ability of Pinoys to find one another when in a foreign land.

It was night time by the time we found the pub among a maze of side streets, and the friendly British proprietor welcomed us for their quiz night. The questions were recited out loud in both Spanish and English (leading to one of my companions translating the Spanish instead of paying attention to the English one!). We took an early lead since we used our joker early, but fell behind when it came to the music-related categories (not an uncommon result for our quiz nights!) 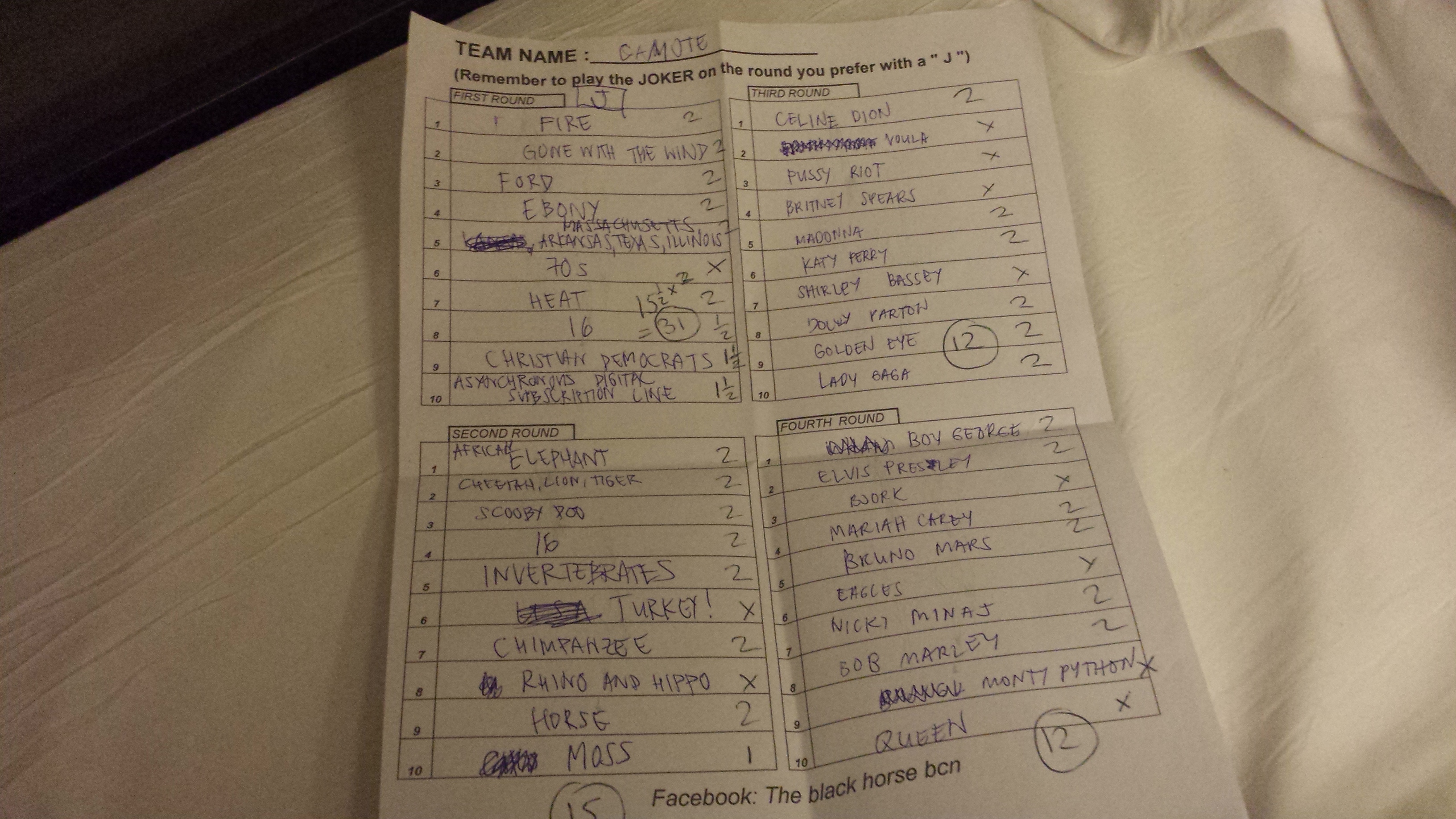 Our quiz night results -- who knows what place we finished

After the pub quiz, we decided to take a cab home since it was late. The cost wasn’t too prohibitive since there were three of us to split the bill. I think it came out to just 2-3 euros each.

As I expected, this post already feels way too long. I was hoping I could cover each leg of the trip in one post, but this feels like a good stopping point. In Barcelona part 2, we visit Park Guell and the Sagrada Familia.

Chiko Tiongson
2015-04-09 16:42:35
I like that you’re very thorough with your description of your trip. Wheee! And I like your pix!
If you enjoyed my content for some reason, I'd love to hear from you! Here are some options: