Previously: I went to Europe, decided I should tell you more about it and started talking about Barcelona

For today, we had decided to visit Park Güell, a Barcelona tourist spot created by this old-timey big shot to display the works of well-known Catalanion architect Antoni Gaudi. I say “well-known” but I’ll be the first to admit that my culturally-ignorant self had not heard of him before, but he’s kind of a big deal in Barcelona with many souvenir shops sporting some thing reminiscent of his works. My travelling companions seemed to know what they were doing, so I generally deferred to them when we planned out the day during breakfast.

The park was some 4 to 5 kilometers north of our hostel by foot, though as usual we took a more leisurely pace. One of the interesting things we saw along the way was a park-like area near a major thoroughfare where we found a number of old men (and one young man apparently playing hooky on what should be a school day) playing some sort of game which involved tossing metal balls around in a sand-covered lot. 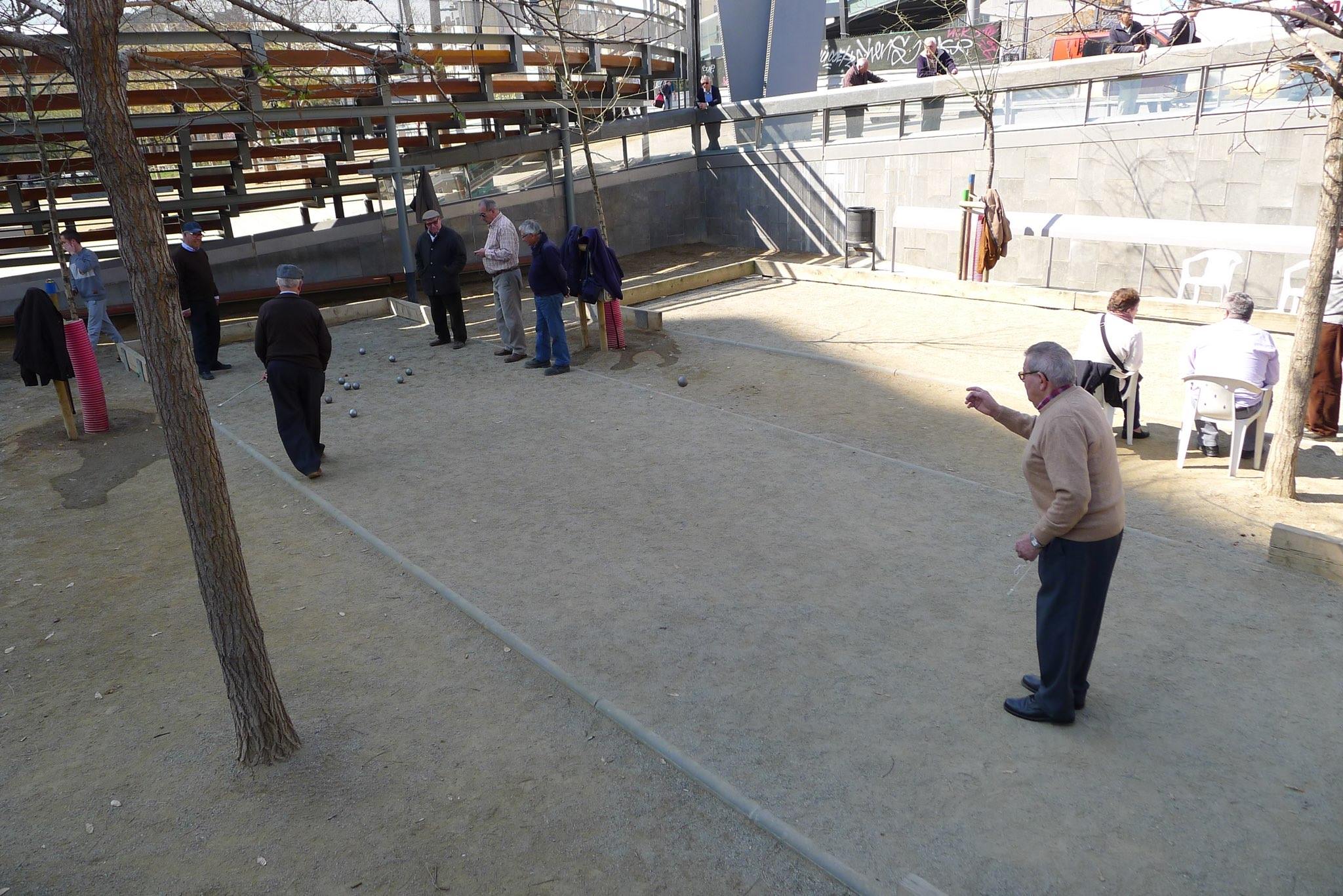 There were benches nearby so we sat there for a while observing the game and trying to figure out the rules. As far as we could tell, first they toss a smaller ball that then acts as a target, and they have to lob the larger metal balls as close as possible to the target.

After watching the games for a while, we decided to continue our trek. From this point on the path we were following (provided by Google Maps) started to tread uphill and I started to get a bit tired. Eventually while my two companions were taking a break and looking at something I vanished for a while as soon as I saw a supermercats so that I could buy a bottle of water and recharge a bit. Supermercats are something like a combination of a small grocery store and a convenience store (they’re everywhere, and they don’t have 7-11s), and they seem to be often run by people of South Asian or Arabic descent. Whenever I see a supermercat, the name makes me visualize some combination of a cat superman who is also half-fish.

We continued along the uphill route, through winding paths and eventually up three flights of stone steps at a 45 degree incline, by which time I was pretty tired and was complaining a lot. I was told we were close, so we trucked on and eventually we turned a corner and found a series of outdoor escalators that would have saved us a lot of effort with those stone steps. I glared at the person guiding our route before we all laughed out loud. The entrance to the park area lay just ahead.

We climbed up a hilly area that afforded a good view of the city of Barcelona before eventually coming upon a tourist area overlooking a sealed-off area that was actually the roof of the columned area of the park. The park was the first tourist attraction we would pay for, and though my stingy self balked a bit at paying 8 euro for the entrance, it would turn out to be one of the cheapest tourist spots we would enter anyway.

I have not much to say about the Park itself, given my lack of architectural and artistic vocabulary. There’s a large columned area where the roof is lined with what I could describe as shattered plates, an impression which would turn out to be typical of Gaudi’s work. 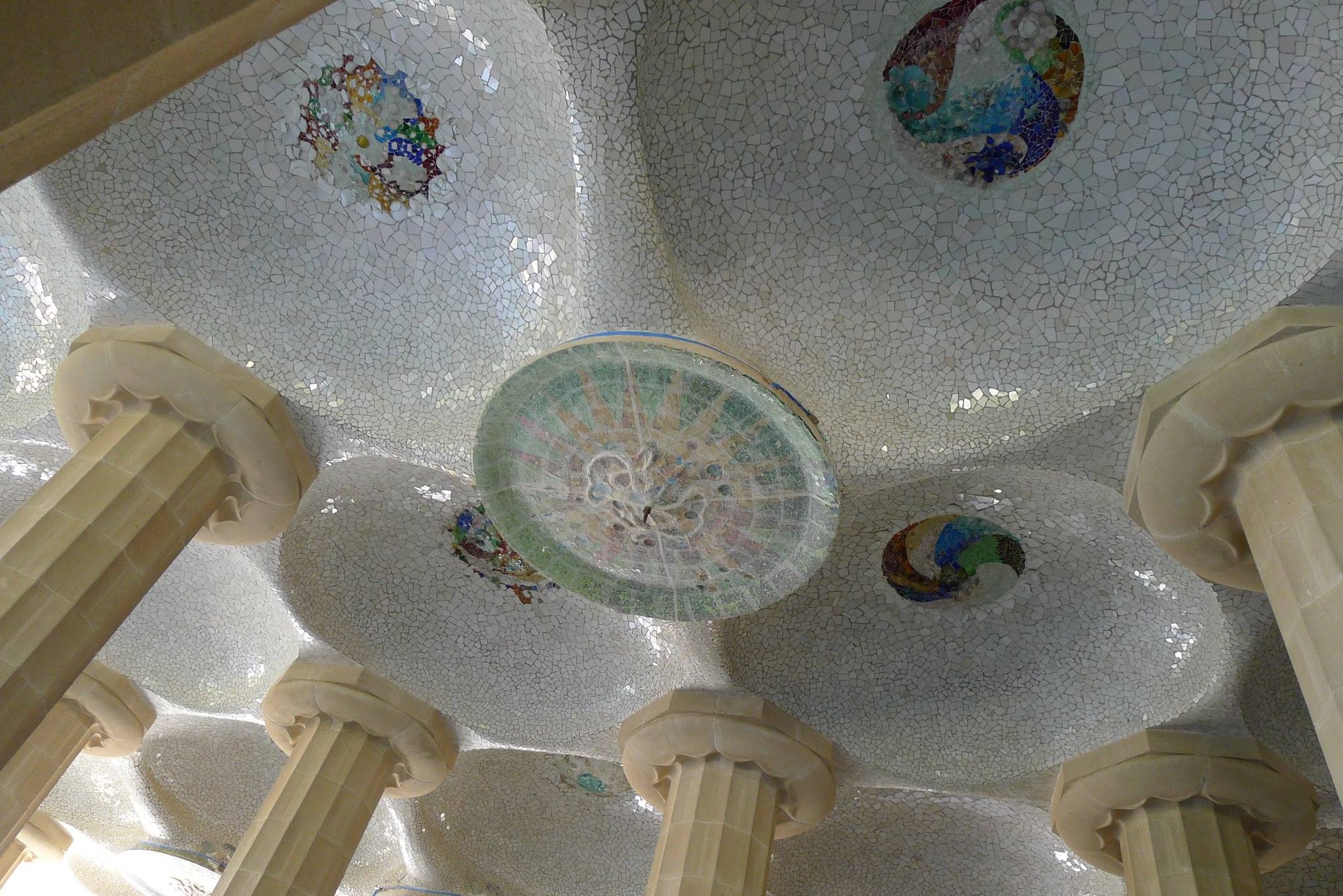 The columned area is surrounded by a gardens area on one side and on the other side an overhang held up by a series of earthy stone columns one of which is carved in the shape of a washer-woman (which took us a few minutes to find). There’s also an actual school inside the park (I’m not sure how that works with the entrance fees) so we get to see a playground full of children enjoying themselves as we walk around the side area to get to the actual front of the park.

The front gate of the park features two guardhouses that give me the impression of gingerbread houses (though one of them was undergoing renovation). The gate opens to an intricately decorated walkway leading up back to the columned area. By intricately decorated, I mean there’s more of the shattered plates designs everywhere. 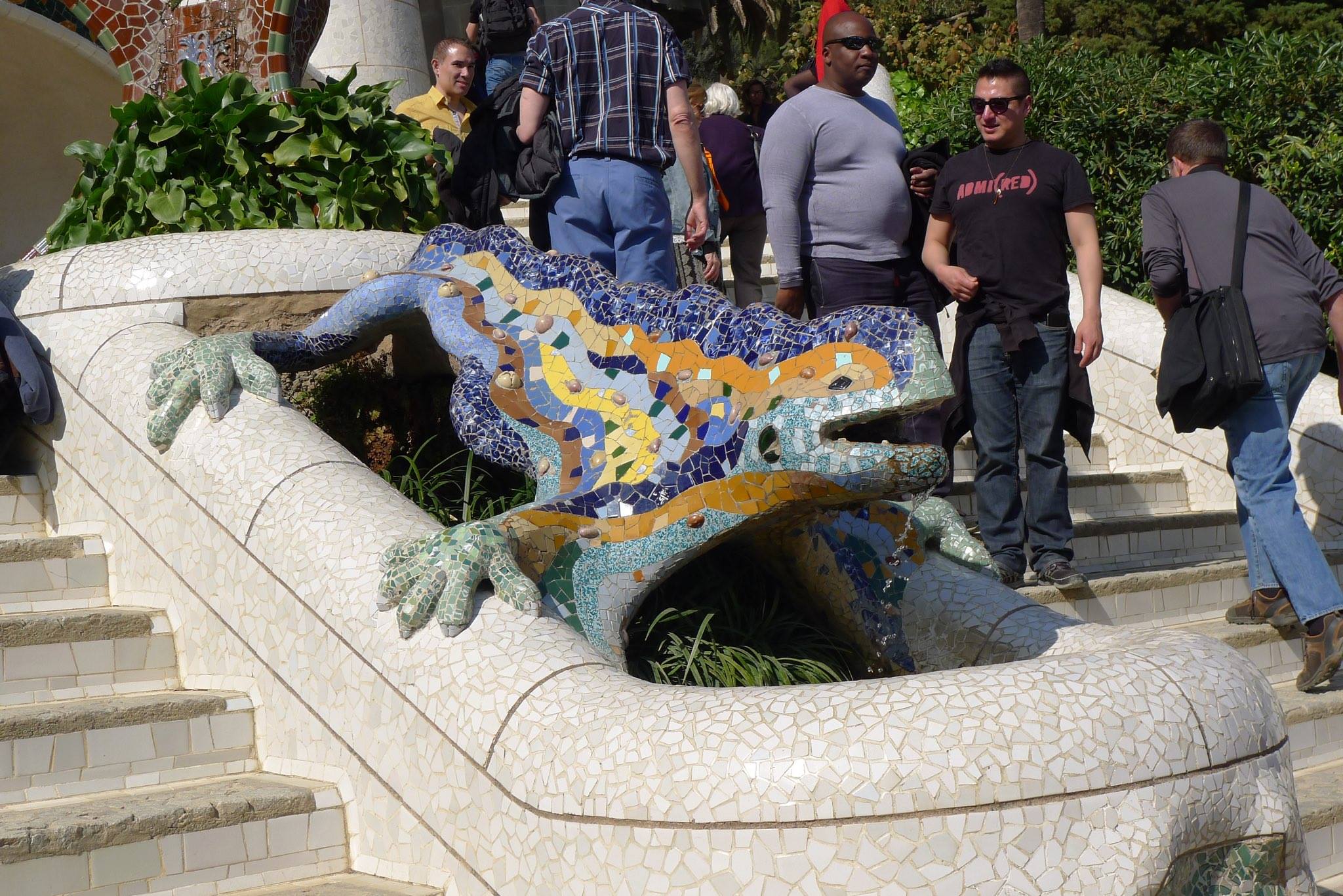 This lizard is kind of a big deal, souvenir shops often have keychains featuring it. Photo credit: Ryan Liwanag

After touring the park we were kind of beat, and we had not yet had lunch despite it being late afternoon. So we decided to take a taxi back to the hostel and rest a bit before heading out to search for some paella.

When we were ready to head out, the person at the hostel reception desk recommended to us a nearby fancy restaurant a couple of corners down that had some good paella so we headed over there. However as our first lesson of how European restaurants actually work, we found out that we were too early as the place would only open at 7:30 pm. This would turn out to be typical in Europe – most restaurant type places would only be open a few hours during lunch time and again a few hours during dinner time, which was bad news for us since we tended to skip some meals and eat at irregular hours.

Undaunted, we walked around a bit for an alternative before settling on a small bar that advertised paella at less than 10 euros each. The proprietor turned out to be a Chinese person affording us the opportunity to miscommunicate with him in two languages as he did not speak English. Paella is a Valencian dish although it’s also common in Catalonia, so I went with Paella Valenciana (okay, it’s also because I eat meat and not seafood) 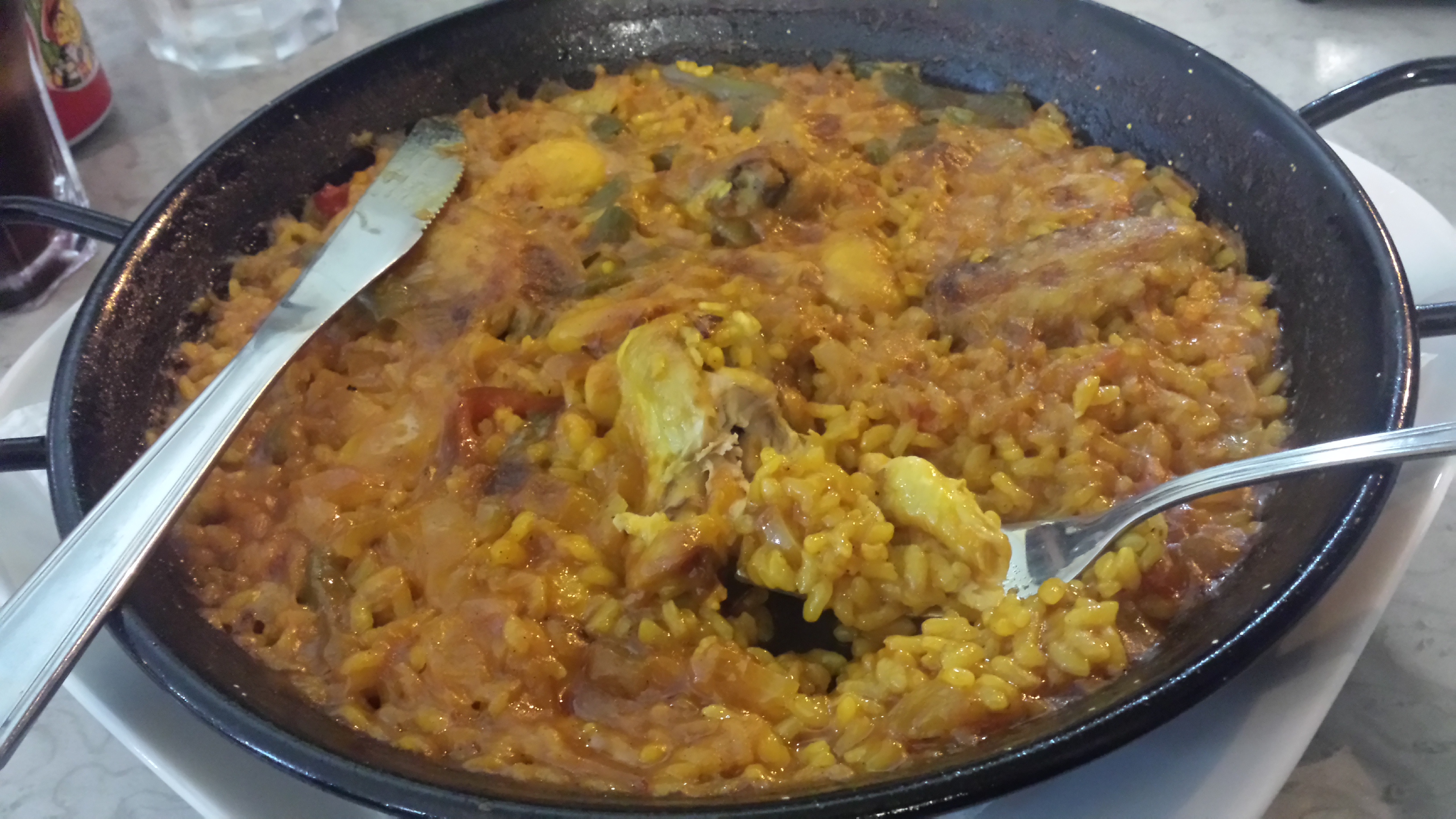 After partaking heartily of the delicious paella which took a while to cook, we also ordered some churros with chocolate dip before heading back to the hostel and crashing for the day.

We would be having our fourth breakfast at the hostel by now, so we’ve kind of gotten to know some of the other guests. One of them is a Japanese woman who speaks clear English; she often brings in fruits from the nearby supermercats during breakfast time. She’s apparently a frequent traveler who would be visiting a few other European countries before heading back to Japan. Another person we got to know was Marco, the owner of the hostel. He’s a talkative Italian man and upon finding out where we’re from and our travel plans he talks to us about how he plans to visit Boracay soon and gives us some tips for visiting Rome.

We headed out Tuesday with the intent of visiting the Sagrada Familia and not much else planned. This meant a leisurely walk along the Diagonal road, one of the major thoroughfares running across Barcelona. It’s called the Diagonal because it cuts diagonally across what is otherwise Barcelona’s orderly-structured regular square street blocks.

The Sagrada Familia itself is a church designed by Gaudi, a large somewhat out-of-place structure occupying one of these city blocks. One of the hostel people had told us its’ history, about how it was started back in the 1800s and that construction was still ongoing up to now. There’s a fee for going inside the church, with the funds contributing to the construction. 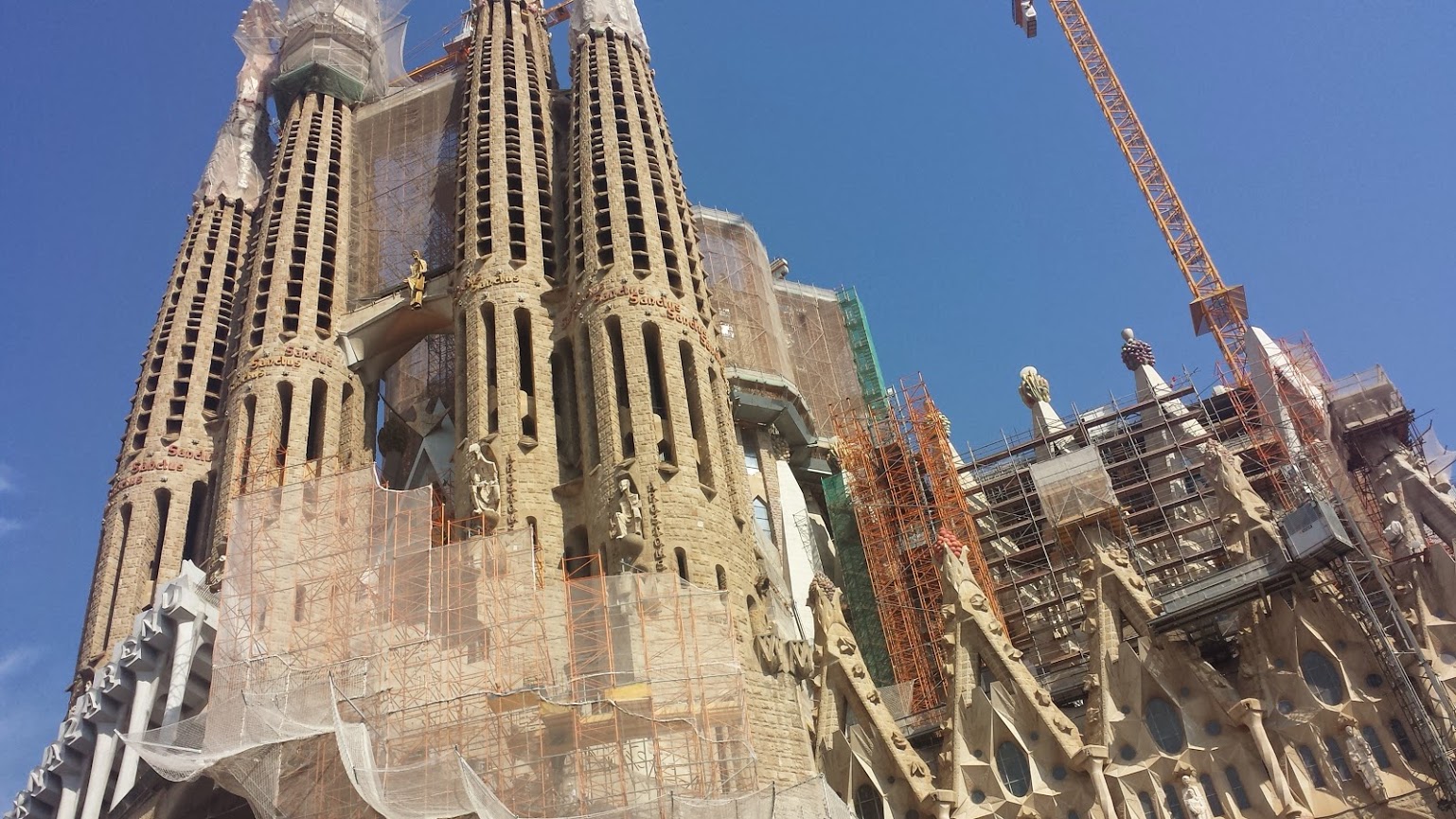 We opt not to go inside, as the facade of the church already offers a lot to see. There seemed to be three different facades and numerous spires, each lined with decorations and statues of a different theme. 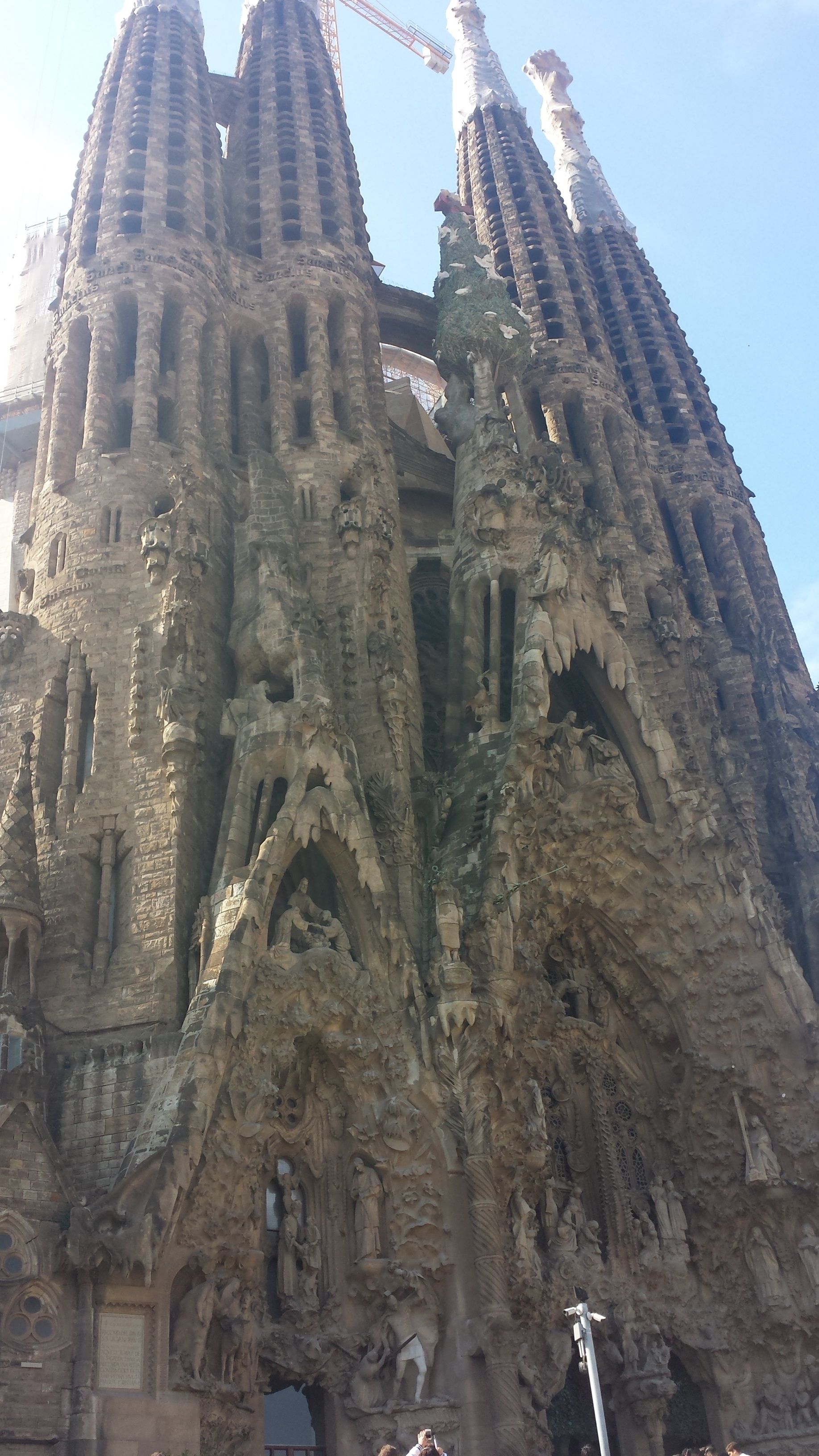 We spent some time admiring the structure, and even a few minutes in an FC Barcelona exhibit right across the street. Afterwards, we headed up a slightly-inclined street towards one of the tourist spots highlighted on our map before deciding to have a late lunch in one of the open air restaurant areas in the middle of the street.

We managed to arrive at the Sant Pau hospital knowing nothing about what it is other than it was a nearby spot on our tourist map. The sign outside tells us it’s a UNESCO world heritage site, but it doesn’t look too impressive from the outside. Nonetheless we paid to go inside and we were surprised to find that it’s actually a rather large complex with a number of elaborately-designed buildings inside. 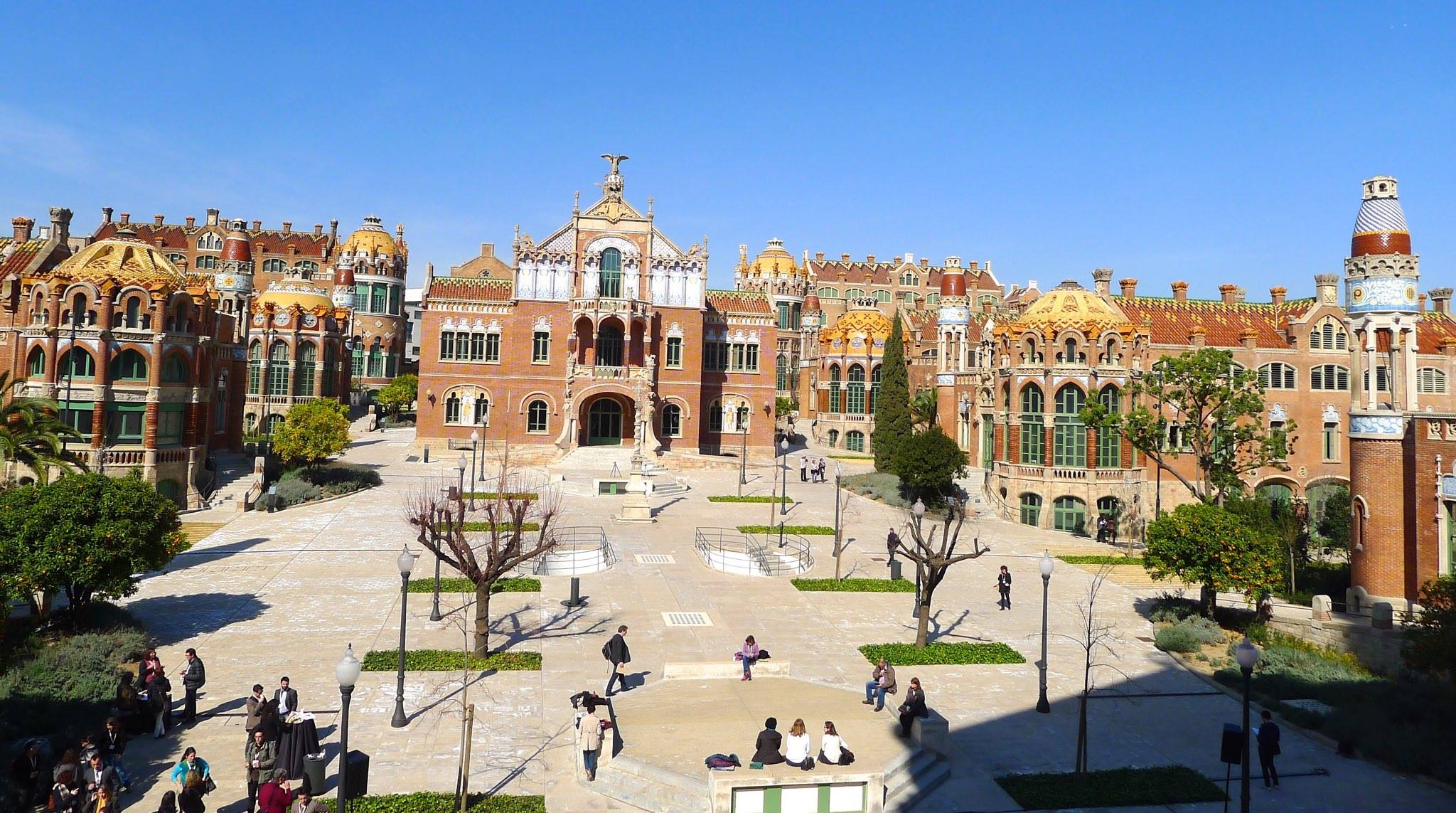 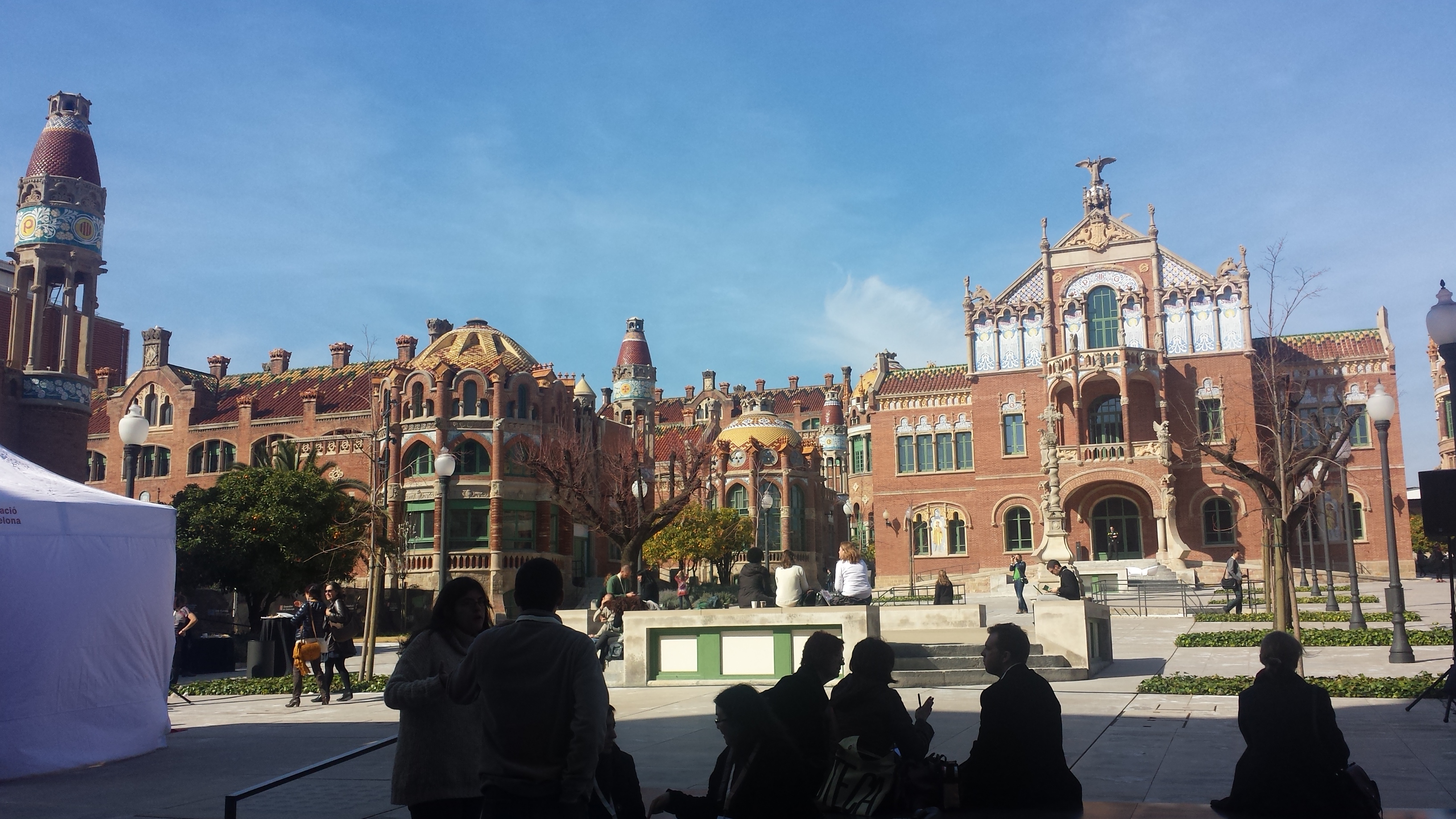 Another view of the hospital

Another view of the hospital

This place was a hospital during wartime. It’s no longer a hospital though, the hospital was moved to a modern site. It’s currently a museum and cultural center and some of the buildings are being used as UNESCO offices. There are almost a dozen buildings lining a central plaza dotted with orange trees. Each building has a different facade, though all in the same style, designed by the Catalan architect Lluís Domènech i Montaner. There was some sort of media event going on though, and we were only able to visit a few of the buildings. The thing about visiting these types of architectural displays is that we’re always walking around with our heads tilted upwards.

We roamed the grounds for a while before deciding to head back and prep for our flight early the next morning to Rome. Our visit to Barcelona was very relaxed, we weren’t too worried about hitting too many tourist spots because we planned to be back here for a few days before flying back to the Southeast Asian side of the world.