It’s early in the morning when the shuttle picks us up to take us to the airport for our flight to Rome. When we first planned the trip a few months back, only Spain and France were on the itinerary. But due to a last-minute change in circumstances, we decided to add Italy to the trip. We had also acquired a railpass and were planning to travel by train between Spain and France, but given the change of plans we decided to refund the railpass (up to 85% of the cost can be refunded) and we literally booked inter-Europe flights during our layover in Singapore at the start of the trip.

We had booked all of our inter-Europe flights on Vueling, a Spain-based budget airline. I was a bit apprehensive about it since internet searches led to some stories of people having trouble with lost baggage, but luckily they were able to get us and our luggage to Rome safely and without incident.

Upon arrival at the Rome airport, we went to a tourist information kiosk to get some maps and whatnot. While we were there, this Italian man kept wanting to talk to us, offering free information about a shuttle service from the airport. We already had instructions on how to get to the hotel by train, so we ignored him at first and tried to figure out ourselves where to go. Eventually we gave up and just took the shuttle service with a few other travelers. We were the last to get off the shuttle, so we got something of a preview of the different places in Rome as the other passengers were dropped off at their hotels.

We were dropped off on a cobblestone sidewalk in front of a four-or-five-story building with a 12-foot tall metal gate in front. We walked in cautiously and found ourselves in a short hallway with a doorway at the end. The old lady who popped up from behind the doorway told us we needed to go up one floor when we told her we were looking for our hotel called Migdal Palace. Another large door on the right side of the hallway led to a stairwell. At the bottom of the stairwell was an old-timey open-air elevator made up of rusty metal bars. We only needed to go up one floor, but what the hell. We rode the small elevator up.

At the reception desk, we were greeted by a pretty Italian lady named Alina who spoke with accented yet clear and understandable English. She was very friendly and told us there was a room ready but we would have to wait a bit for the beds to be set up. We had not yet had breakfast at this point, so we asked her the most relevant question: was there a nearby place where we could eat some good pasta?

She directed us to a small restaurant at a corner a few blocks from the hotel, the Montecarlo, saying that she ate there all the time. We were a bit early for the lunch hour so we had to wait a few minutes for them to be ready. We were seated at an outdoors table; I ordered some carbonara, since Marco from Freehostels had recommended it, while my two companions ordered cacio e pepe, recommended by Alina at Migdal Palace.

While waiting for the meals to be served we pored over the maps to plan out our Rome trip. We only had 3 days in Rome, so we allocated today for walking around a bit and seeing nearby things, then the next day we would visit the Vatican, and on the third day the Colosseum. 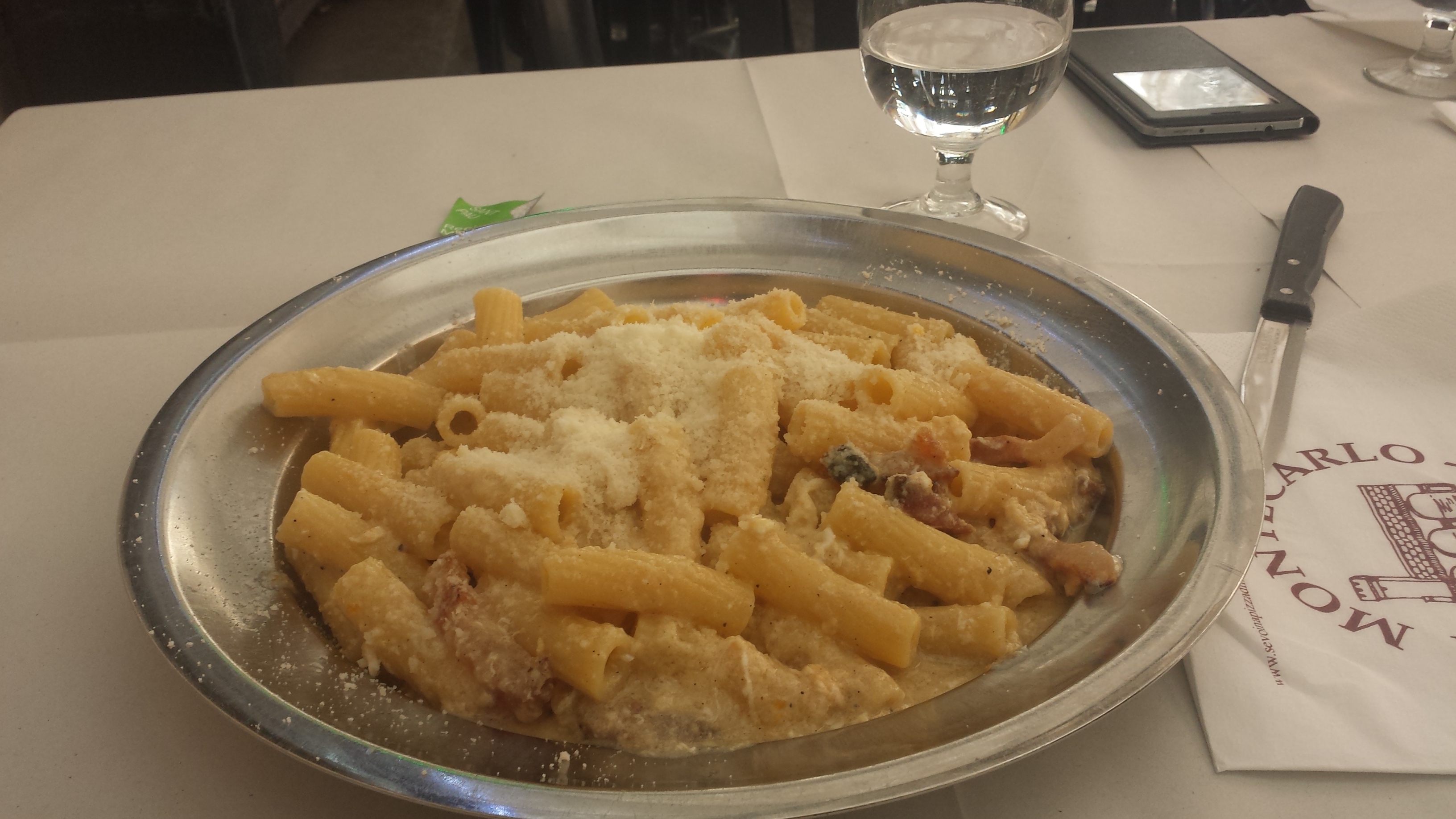 The carbonara was very good and very cheesy; the sauce was egg-based without cream (as opposed to the cream-based ones I’m used to) and luckily no mushrooms (I dislike mushrooms). I also had a few bites of my friends’ cacio e pepe and it was a strange combination of tastes but also very good.

After eating we headed back to the hotel where the beds had already been set up. We rested up for a bit before heading out to explore the city a bit.

We made our way through the city, passing by a couple of plazas with small fountains surrounded by a maze of irregularly-arranged cobblestone streets. Rome was easily way more crowded than Barcelona and was very much a tourist city, made obvious by the abundance of shops and street stalls peddling magnets, keychains, miniature roman helmets and other random souvenirs.

We visited the Pantheon (an ancient Roman circular domed structure adorned with various exhibits including the remains of the ninja turtle Raphael), the church of Saint Ignatius de Loyola (which would turn out to be the first of many well-decorated churches we would visit) among other places. We made our way to the well-known Trevi Fountain, but unfortunately for us, it was undergoing renovation at this time and was drained of water. We walked around a bit more and late at night we ended up eating at this kinda fancy Italian restaurant which charged us an extra 5 euros for the tablecloth (or at least that what the chef’s gestures looked like when we asked him to explain the bill)

Not too much detail to talk about here, but here are some pictures I shared via Google Plus: Wednesday afternoon in Rome.  (You might need to be logged in to Google to access, I have no idea how this works)

Next day we availed of the free breakfast served by Migdal Palace, which consisted of bread, croissants, eggs, goat cheese and no meat, which ranks it below the breakfast from Free Hostels. Nonetheless we had our fill before heading out for the day’s walking around.

We made our way west towards the Tiber river, then followed it north until we crossed the river at the Angel Bridge towards the Castel Sant’Angelo. From there we walked westward along the Via de Conciliazone which would bring us right in front of Vatican City.

As we approached the Vatican, a blonde lady started walking with us and offering us details about a tour package she was offering. I wanted to ignore her, but my companions started listening to her so we stopped to hear her spiel. The way she told it, the tour involved us paying 46 euro each and included a 26 euro entrance fee for the Vatican Museum and the tour groups would also have access to a special passage from the Sistine Chapel to the Basilica of St. Peter. While there was no entrance fee for the Basilica, going with a tour group would allow us to skip the ridiculously long line of the tourists waiting to enter the Basilica. However, the fee the lady was offering seemed too rich for our blood so we passed on it and carried on.

We reached the border to Vatican City and stood there for a while contemplating how to proceed, and we were approached by another person selling tour packages. This time it was a man of South Asian descent who reminded me of Community’s Abed. He got our attention by calling out in Tagalog “pinakamura dito!” 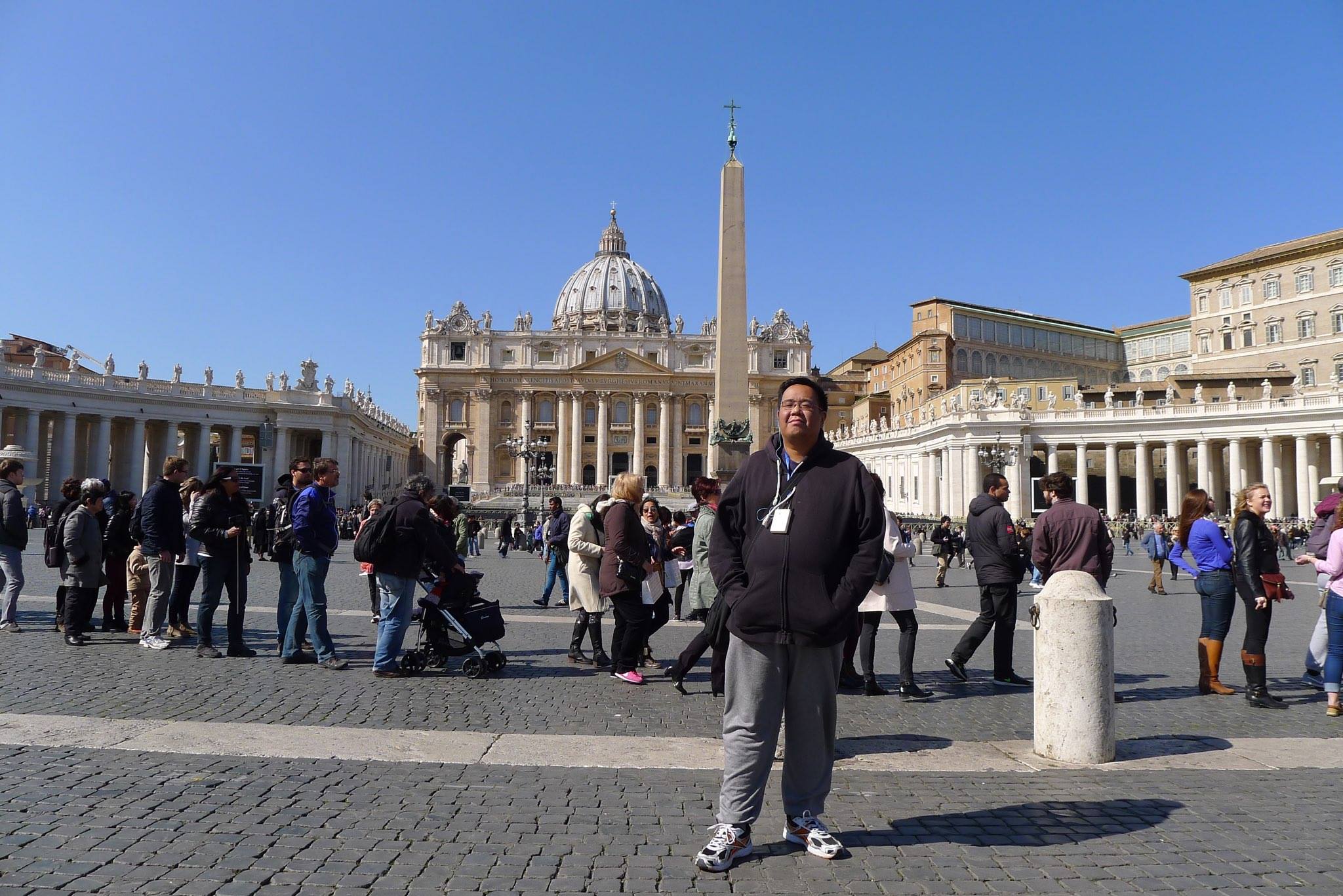 The tour package he offered us was similar to what the blonde lady had, except he was was offering us a price of 36 euros each, or 10 euros less. While we were contemplating it, we also met with a couple of Filipino expats who were referring people to a nearby souvenir store they were involved with, and they told us the price Abed was offering was already pretty good. After some discussion, we decided to go with it.

We were introduced to our tour guide Angelica and handed phone-sized receivers with earphones that we could use to listen to her while she talked about stuff on the tour. We started in front of the Basilica, joined by some white people, and Angelica described to us the history of Rome and Italty and Vatican City and Pope Francis and all that jazz. Pretty informative stuff, but nothing I need to repeat here. After a bunch of these introductions, we would go over to their tour office to pay the fee before heading off to the Vatican Museum.

As we were walking towards their tour office, I saw Abed calling me over away from the group, and I walked over to him and he told me that the white people that were part of our tour group had been given a higher price so that we should avoid mentioning how much we are paying. Felt a bit shady, but I guess we were getting a better deal so we ran with it.

After paying at the tour office, we headed over to the Vatican Museum. At that point we found out that the Vatican Museum entrance fee was actually only 16 euro, so I’m not sure why both the blonde lady and Abed said it was 26 euro. Whatever.

The Vatican Museum was filled with exhibits featuring statues depicting Roman emperors and other events from Roman history, including statues of Roman gods (which I didn’t expect from a Catholic institution). There was also a section filled with Catholic-focused murals and ceiling paintings. Angelica would stop at various exhibits to give us a brief background and history. We stopped at a corner of the pinecone courtyard so that Angelica could give us a briefing on the history of the Sistine Chapel – apparently they were not allowed to give briefings inside the Sistine Chapel itself. Naturally she had to give us the joke about the missing first fifteen chapels.

Afterwards we went into the Sistine Chapel itself. No photography was allowed inside so we spent most of the time staring upwards at Michaelangelo’s masterpieces on the ceiling (being a tourist in Rome apparently meant looking up a lot).

After the Sistine Chapel, Angelica took our group through the secret passage reserved for tour groups. It brought us to the front entrance of St. Peter’s Basilica where the tour ended. Angelica gave us some last words and left us to take a look at the Basilica at our own leisure.

I’m finding it difficult to find the words to describe the Basilica itself, I guess the most appropriate word to use is grand. We spent one hour walking separately around the Basilica just looking at things (although I did spend some time sitting down since we had been walking through the Vatican Museum for around 3 hours before this). There’s just a lot of history and statues and paintings and chandeliers and tombs and relics. As a Catholic it was well worth the visit. On our way out we took some pictures with some Swiss Guard standing by one of the side entrances.

We left the Basilica at around 3pm and had a late lunch at a restaurant along the Via de Conciliazone. After that it was still early so we spent a couple more hours walking around checking a few more sites and running into some weird yet entertaining street art. We wanted to visit the Villa Medici, but it was closed on this day. Eventually we got tired and decided to take a taxi back to the hotel and rest.

Some pictures from this day: Thursday in Rome.

I was hoping to cover all of the Rome leg in one post, but this post is already long enough as it is. It may take at least three more posts to cover everything else, I hope the audience doesn’t get tired.