This was our last day in Rome and we were planning to visit the Colosseum and the nearby Palatino Hill. It was a long walk and we passed by a few palaces and the usual open plazas, many of the landmarks identified by Egpytian obelisks placed there by the Roman emperors. Rome is chock-full of cobblestone roads and plazas lined with souvenir shops and pizzerias and buildings fronted by 12-foot-high steel doors with large lion-head knockers and churches liberally sprinkled every other block. One of the churches we passed through was the Santa Maria in Cosmedin church which featured the Bocca del Verita/Mouth of Truth, made famous by the 1953 film Roman Holiday. There’s a short queue outside the church for tourists wanting to take a picture at the Mouth of Truth. 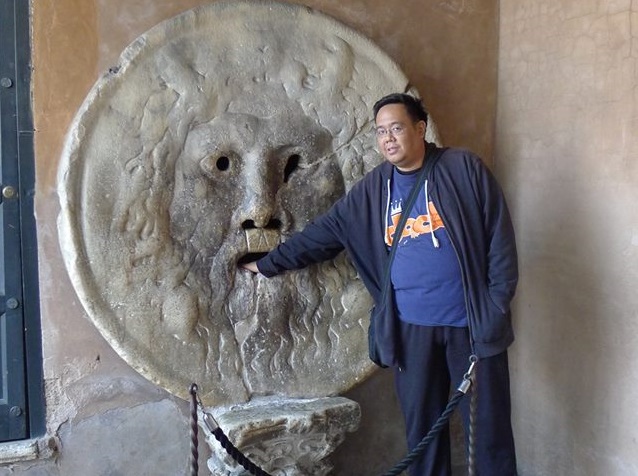 Supposedly if you lie with your hand inside the mouth, you will lose your hand. I would have pretended to lose my hand, but the guy ahead of us in the queue already did that gag

The church itself wasn’t too large – it was only a minor basilica, but there was a display of the relics of St. Valentine.

We also passed by a large elliptical open field on the way to the Colosseum, which we found out later to be the site of the Circus Maximus. It used to be the site of ancient Roman chariot races. For some reason, I decided to pick up a rock from the field and take it back home as a souvenir (hopefully not illegal LOL)

After that we arrived at the Colosseum itself. Outside the Colosseum were the usual merchants selling various souvenirs including replica Roman soldier helmets and swords. I asked the merchant how much one of them was an he jokingly told me it was one million euro. There were some people offering guided tours, but we decided to go our own this time. The ticket price was 16 euro for a combination ticket that gave us access to the Colosseum and the nearby Palatino Hill and Roman forum. 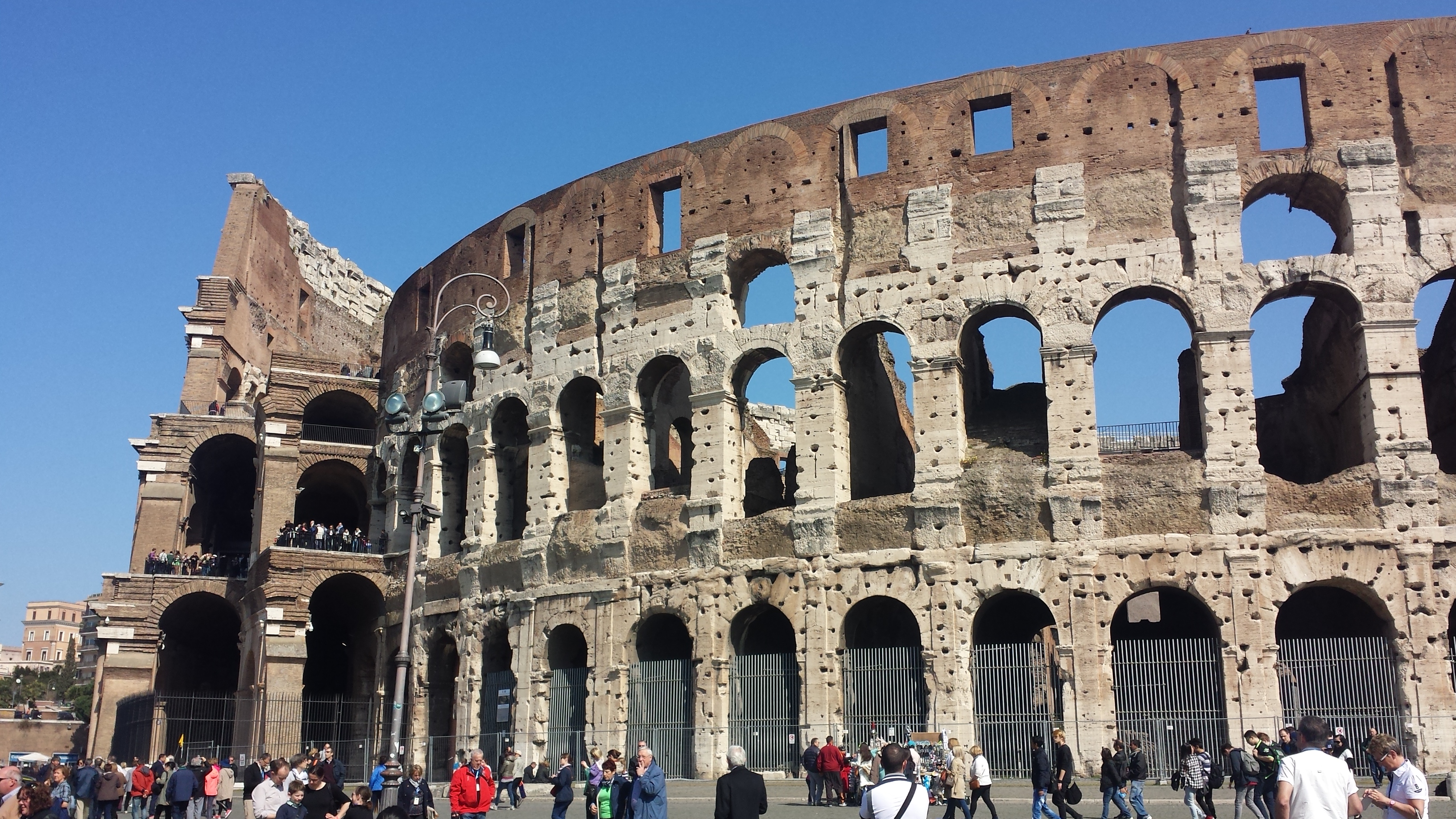 The outside of the Colosseum - the pillars are riddled with holes

The Colosseum had a few exhibits inside showing artifacts recovered from the site that gave insights as to how the ancient Romans enjoyed the games, including graffiti from the stone seats depicting Roman gladiators and pots and pans indicating the audience cooked meals while watching. 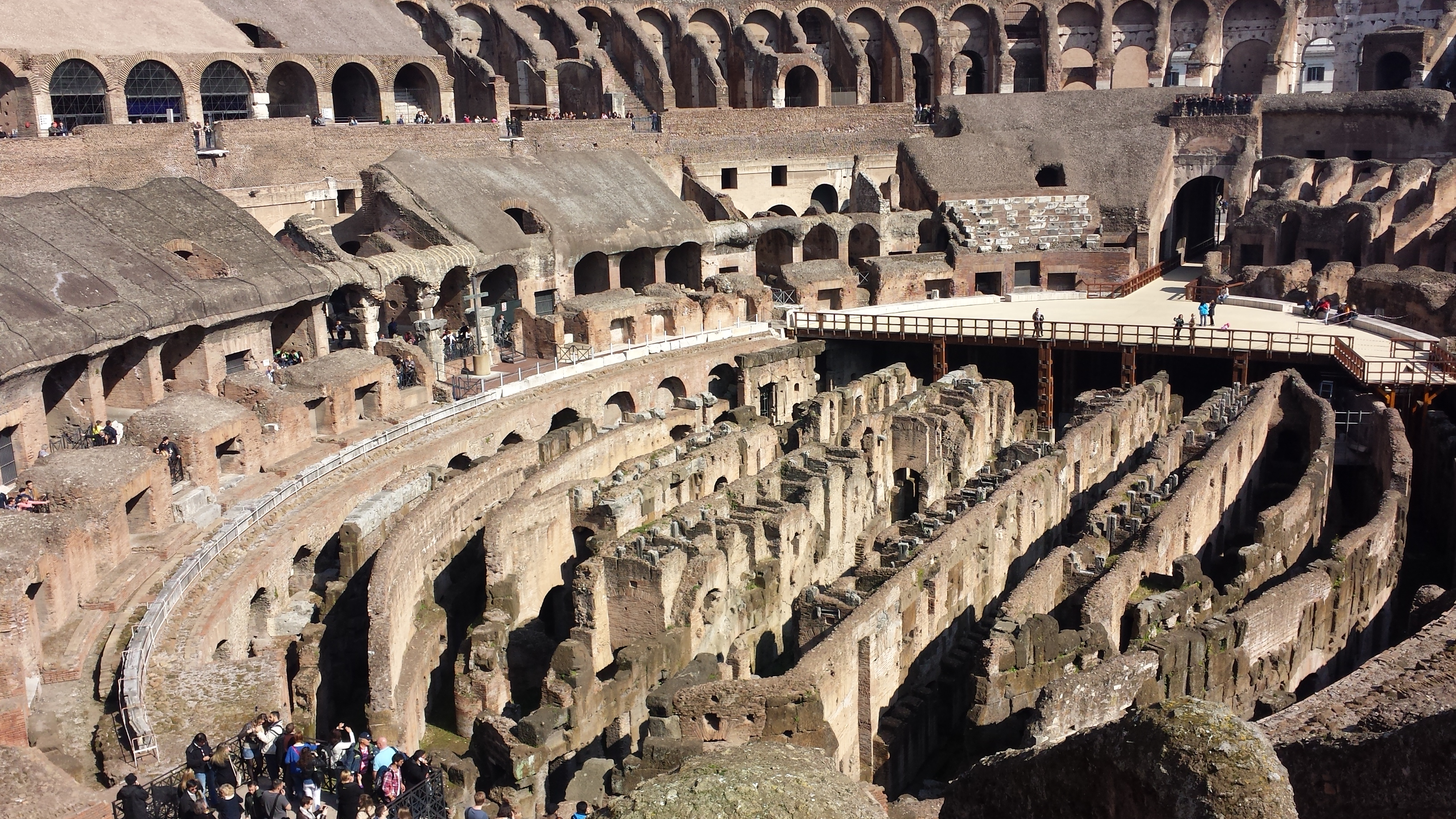 The Colosseum has three levels and a basement level, although our ticket did not allow us access to the basement. It was thankfully a rather warm day although still a bit windy, as we spent some time going around the first and second levels. I had to resist the urge to shout “ARE YOU NOT ENTERTAINED?!?”

Just across the street from the Colosseum and up an inclined road was the entrance to the Palatine Hill and Roman Forum. We head up the elevated area first to go around the gardens and building ruins of the former palace. We were already a bit tired by this point and climbing up the hill was exhausting but it did afford us a good elevated view of the Colosseum and the nearby sights. 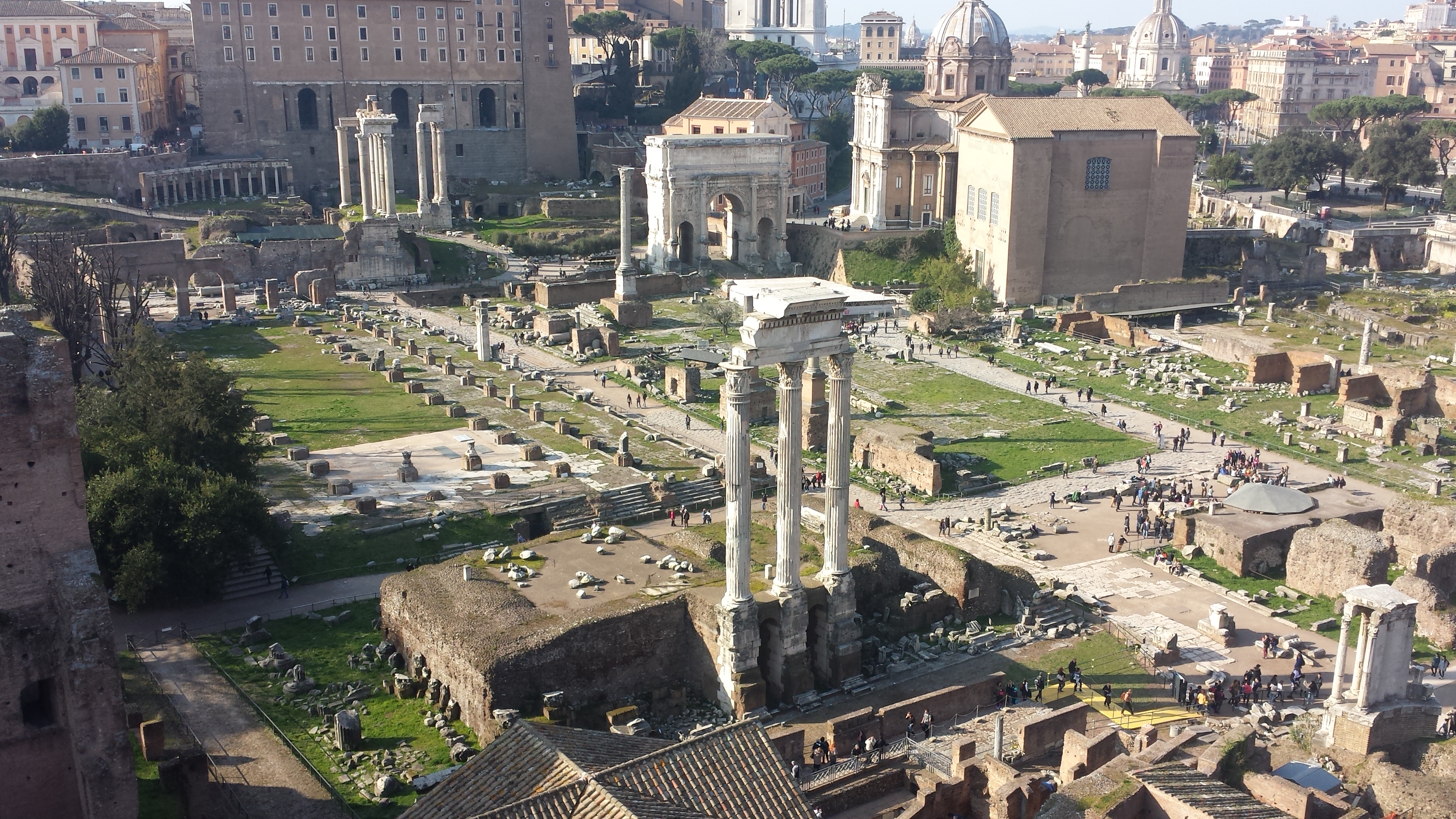 The view overlooking the Roman forum and nearby ruins

We wasted some time trying to figure out the correct path to climb down the hill (we totally weren’t lost!) At the base of the hill we visited the ruins of the Roman Forum (disappointingly, it was just a bunch of stones) and we also visited a couple of temples before deciding that we were too tired to look at everything. Tapped out, we tried to figure out where the exit was.

We walked back to our hotel, stopping for a late lunch of sandwiches at a small corner shop and later on at a gelato place along the way where the young woman behind the register somehow managed to figure out we were fellow Filipinos while we perused the menu.

It was still early, but since we had a late lunch that day so my companions didn’t want to go have dinner any more. But I felt like while I was in Rome I should eat more pasta so I headed out into the chilly night and decided to return to the Montecarlo and I had some gnocchi despite not being too hungry (it was still pretty good!) After dinner, I headed back to hotel and we rested up for the trip to Paris the next morning.

After a slight scare with a delay in finding our check-in luggage, we took a taxi from the ORLY airport in Paris to our hotel. The taxi turned out more expensive than we had expected, but I think by that time we were at a point in the trip that we were more willing to spend than be tired.

Our hotel was the Hotel Camelia International on Rue Darcet. We were greeted at the lobby by a grumpy-looking one-legged Frenchman who reminded me of Ray’s father from Everybody Loves Raymond. He confirmed our reservation and gave us keys for our room on the sixth floor, instructing us to use the lift. The lift turned out to be able to carry only two people at the time, so we had to take two trips. The room itself was mostly just the three beds crammed into a tight space. The bathroom/toilet had no lock and if you were sitting on the bidet, the door would slam right into you when it opened. The room had no wi-fi – you would need to go sit at the common area in front of the reception to use the wifi. We did not take the breakfast option at this hotel, which turned out to be a good idea, as it turned out later to be only a croissant and coffee. While pleasant enough, the place was easily the worst among the places we stayed at during the trip.

After a bit of rest we headed out to find something to eat and ended up ending at a restaurant serving South-Asian style food where I had some sort of shawarma type of thing. As usual while eating we planned out our day: we decided today to visit at least the Arc de Triomphe and the Champs-Elysees.

Paris wasn’t like Rome with all the crowds and tourist spots so close together, it was closer to Barcelona with wide streets and lots of open spaces. Like Rome, there seemed to be no skyscrapers in Paris; we passed by what seemed to be residential neighborhoods lined with trees coming back from winter cut in identical patterns. We arrived at the rotunda surrounding the Arc de Triomphe and we took the tunnel to cross the road to the island where it was. We decided not to pay the fee to climb the Arc since we were planning to climb the Eiffel later on and we would get a better view from there.

From there we made our way to the Champs-Elysees. I wasn’t sure what I expected, but it was full of fancy, high-end shops. Lots of tourists too. We only went into a couple of shops (I’m not really into shopping). The wind was brisk and cold as we made our way down the avenue; eventually we moved past the area full of shops and arrived at a couple of museums adorned with gilded fences and statues of angelic hosts, I believe one of them was the Grand Palais.

From there we walked a bit south until we were at the Seine near the Pont Alexandre, a well-decorated bridge which gave us a good view of the Eiffel Tower in the distance. The bridge was surrounded by pillars on each end with ornate gold statues atop them. Apparently this bridge is a popular location for prenup pics; we counted no less than 6 couples in tuxedos and wedding gowns having their pictures taken on or near the bridge. 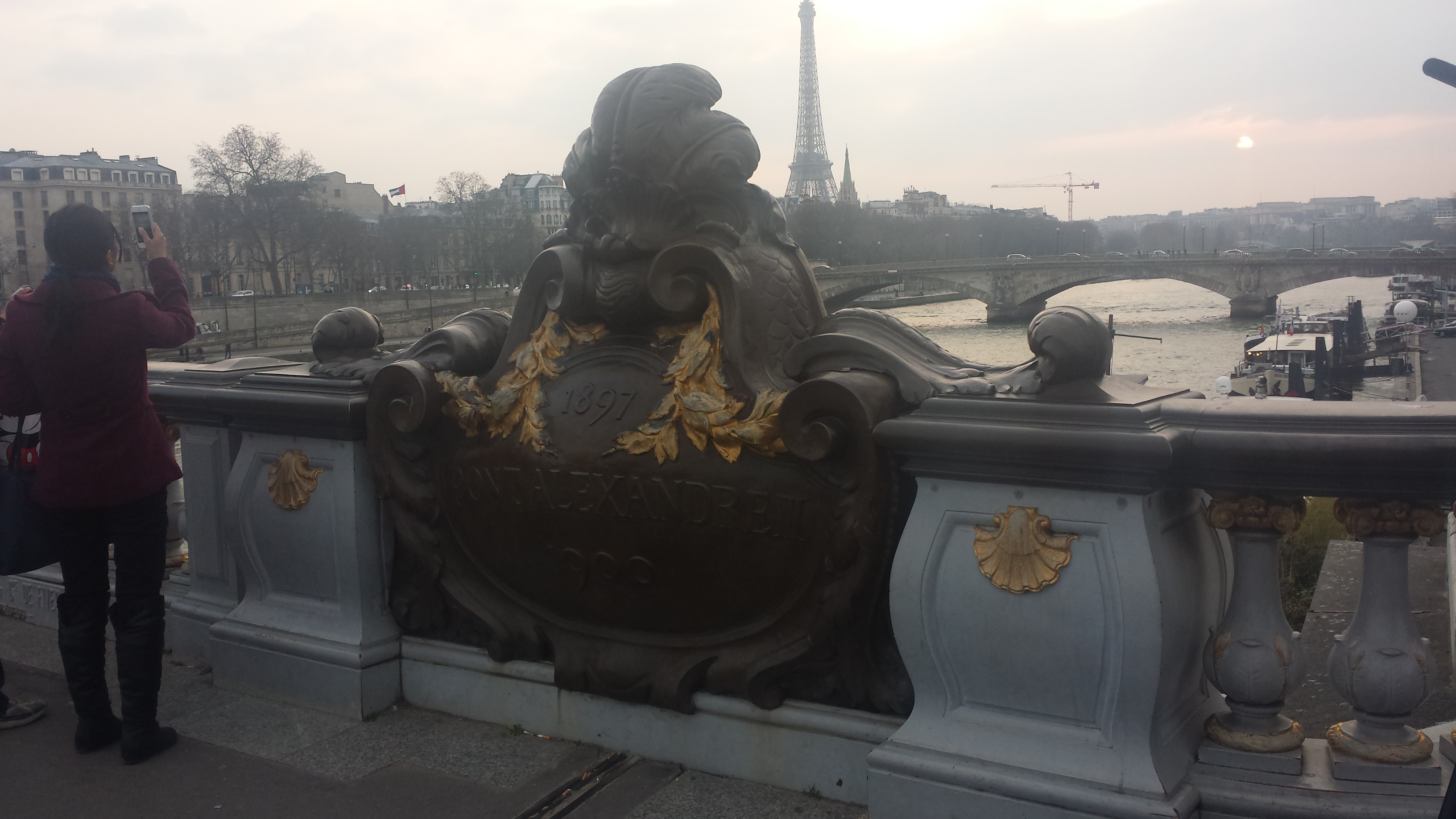 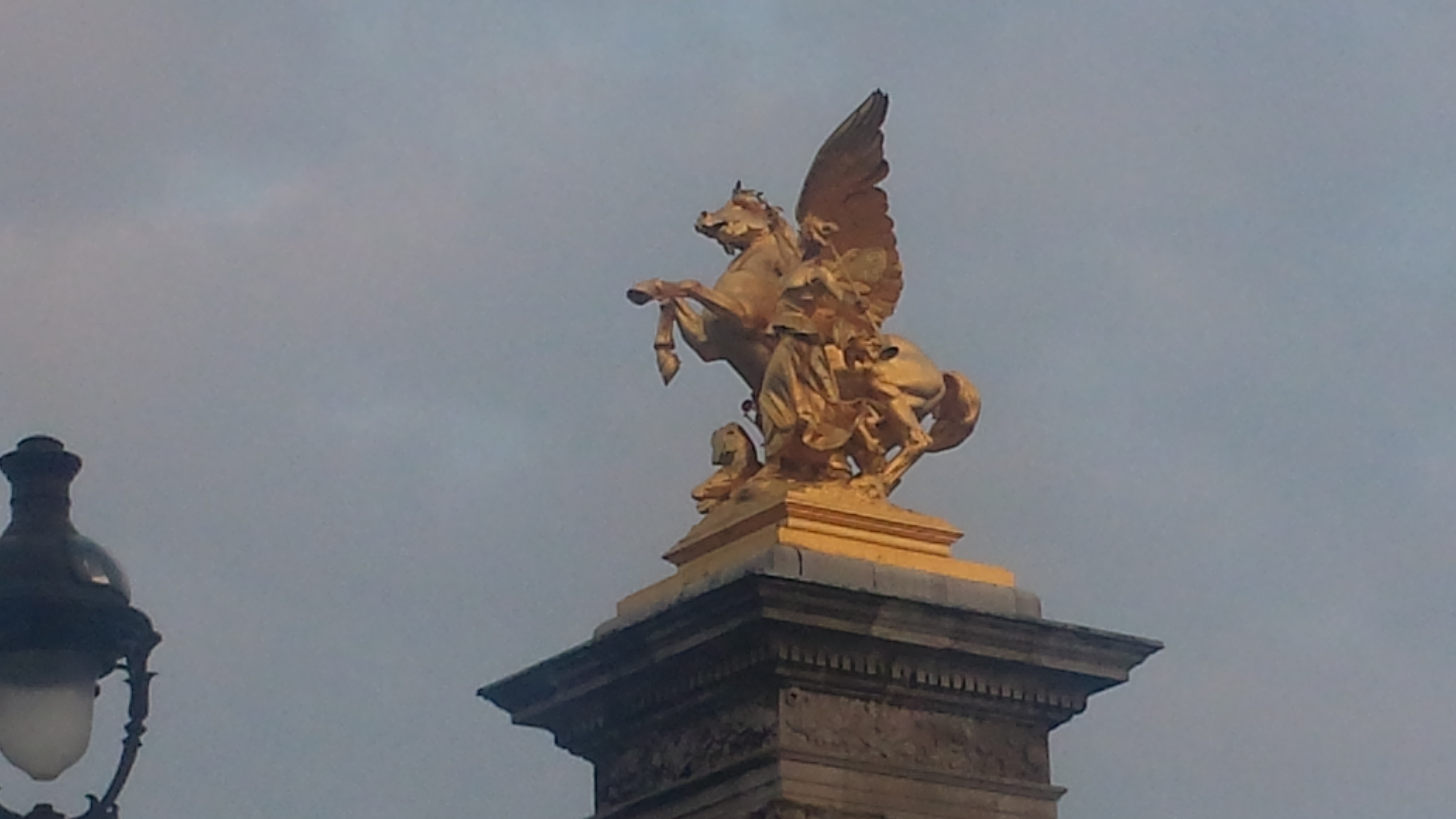 One of the golden statues watching over the Pont Alexander

It was almost dusk by then so we started to make our way back to the hotel. We make our way through a maze of streets named after different capital cities, passing near the La Madeleine church. By this time night had rolled around and the buildings and restaurants are illuminated in various shades of neon. We arrive at the hotel late at night, and we turn in early in preparation for more walking around the next day.

Next: The Louvre and The Versailles