This series of posts has taken longer than I thought it would, and I grow weary on it. We’ll cover things a bit faster from here, less of the daily stuff and we’ll stick to the highlights. This will be the final entry!

This Sunday we took a long walk to visit the famous Louvre museum (why go to Paris and not see the Louvre). The French person behind the ticket booth greeted us in Tagalog when we told him we were from the Philippines. I was pleasantly surprised to find out the audioguide offered for the museum used a Nintendo 3DS XL and a custom cartridge.

The museum had a lot of Greek and Roman pieces and of course French artwork. Some of the things I found most interesting follow. 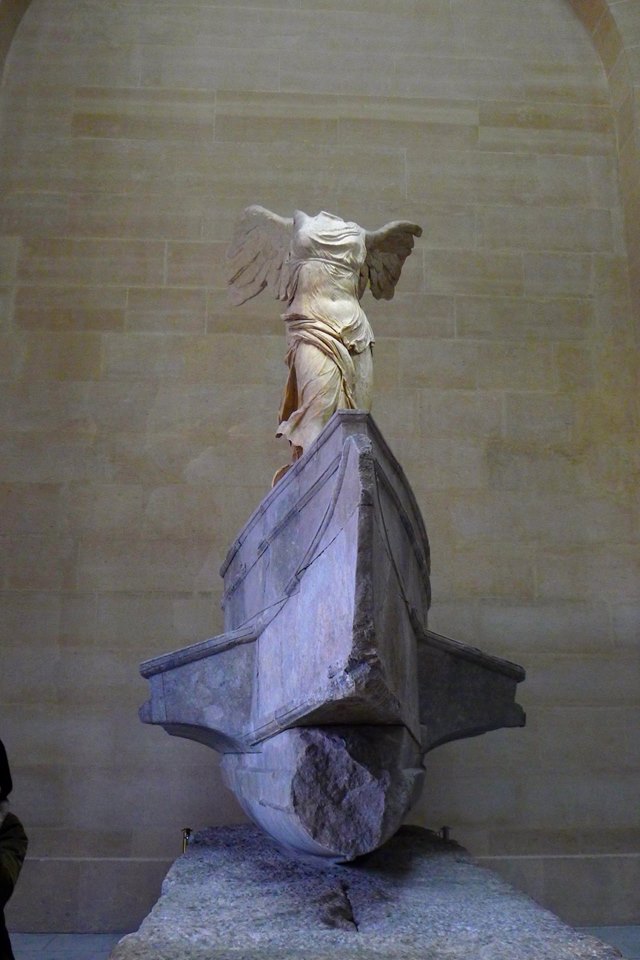 The Winged Victory of Samothrace. Well, I may have accidentally clicked on the detailed guide for this piece and thus spent some extra time here 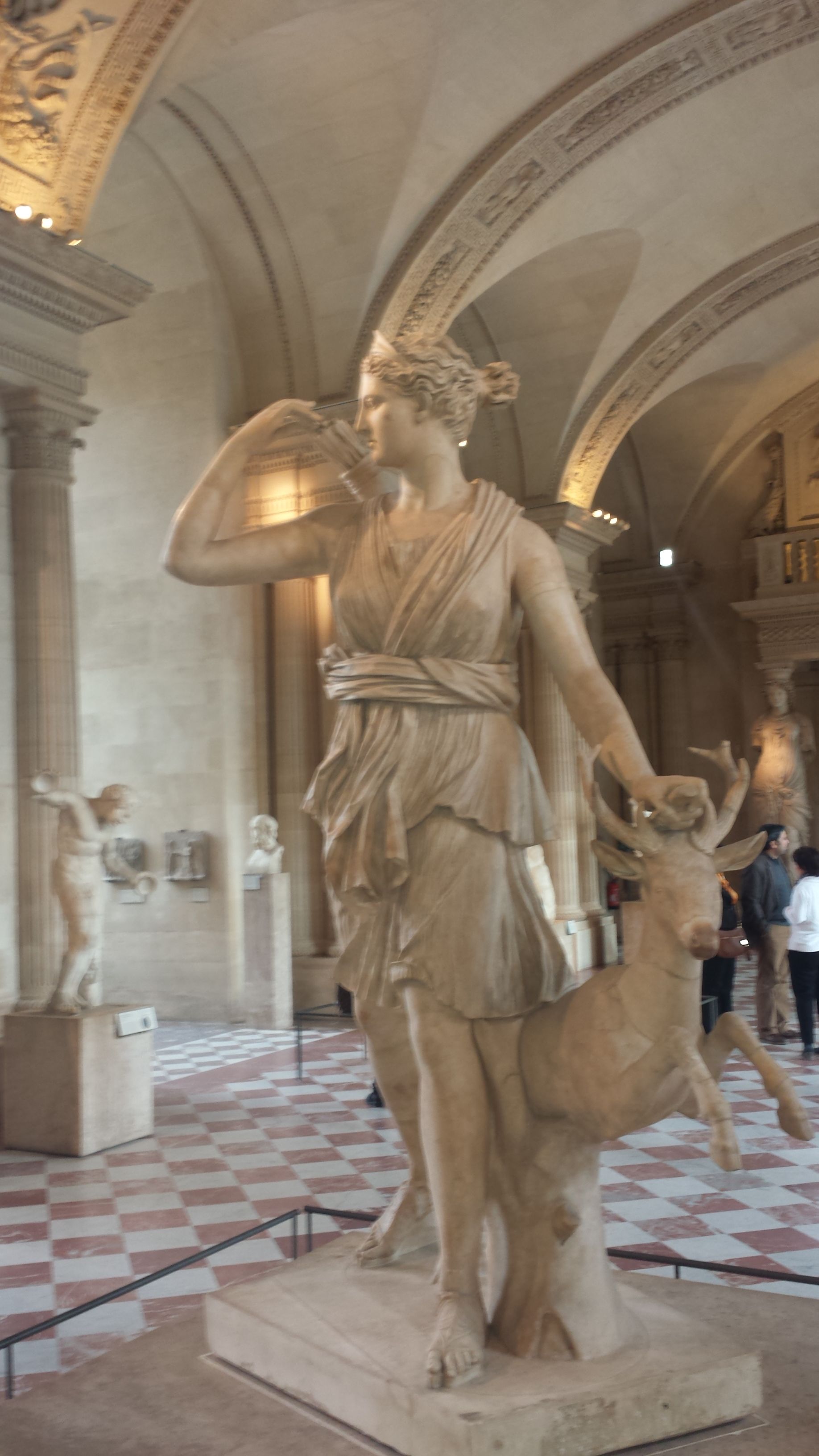 Diana of the Hunt. There's a replica of this statue in the hall of mirrors in Versailles 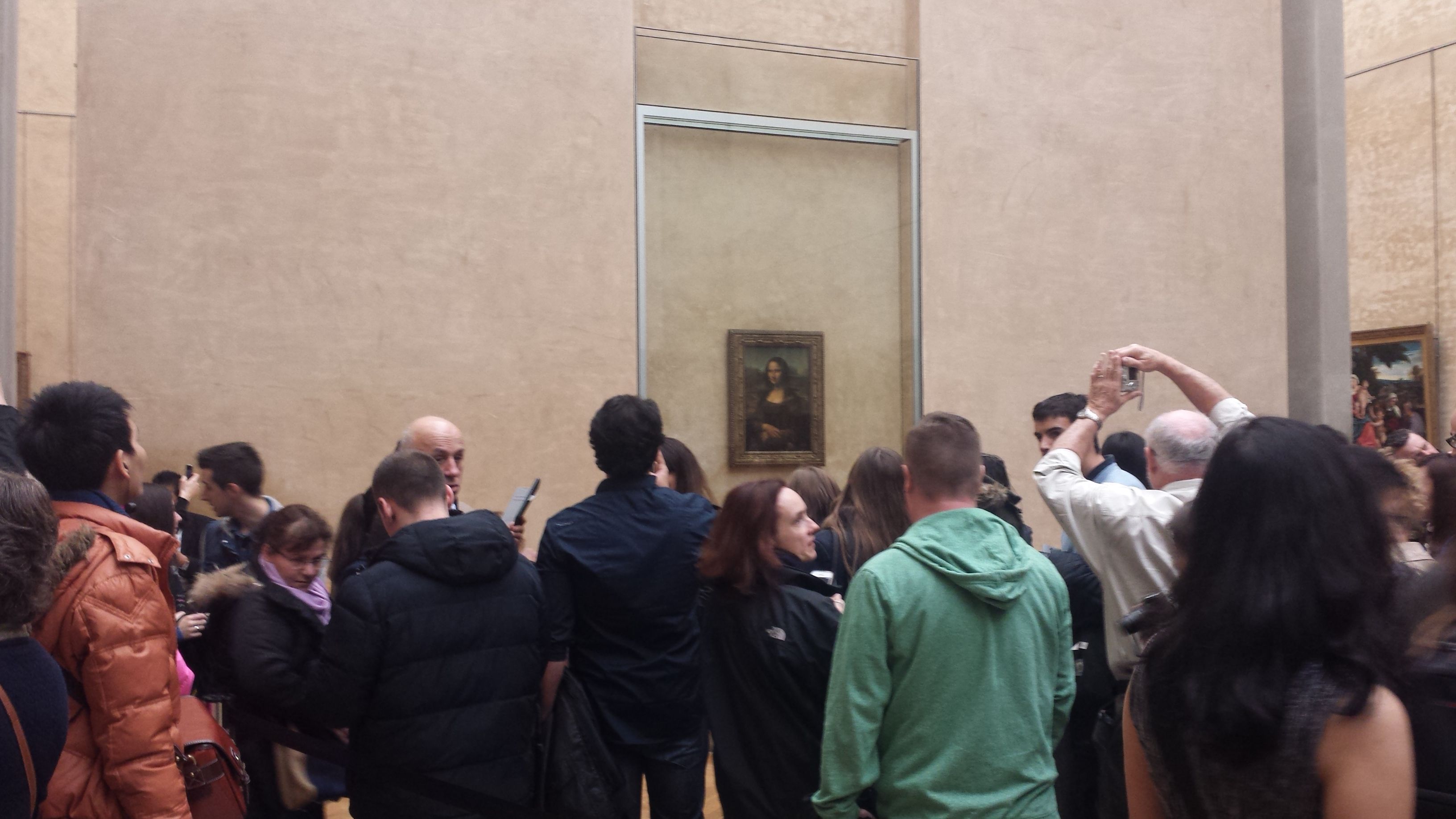 Apparently there's always a big crowd around the Mona Lisa. I honestly found it a bit underwhelming, given how famous it is. 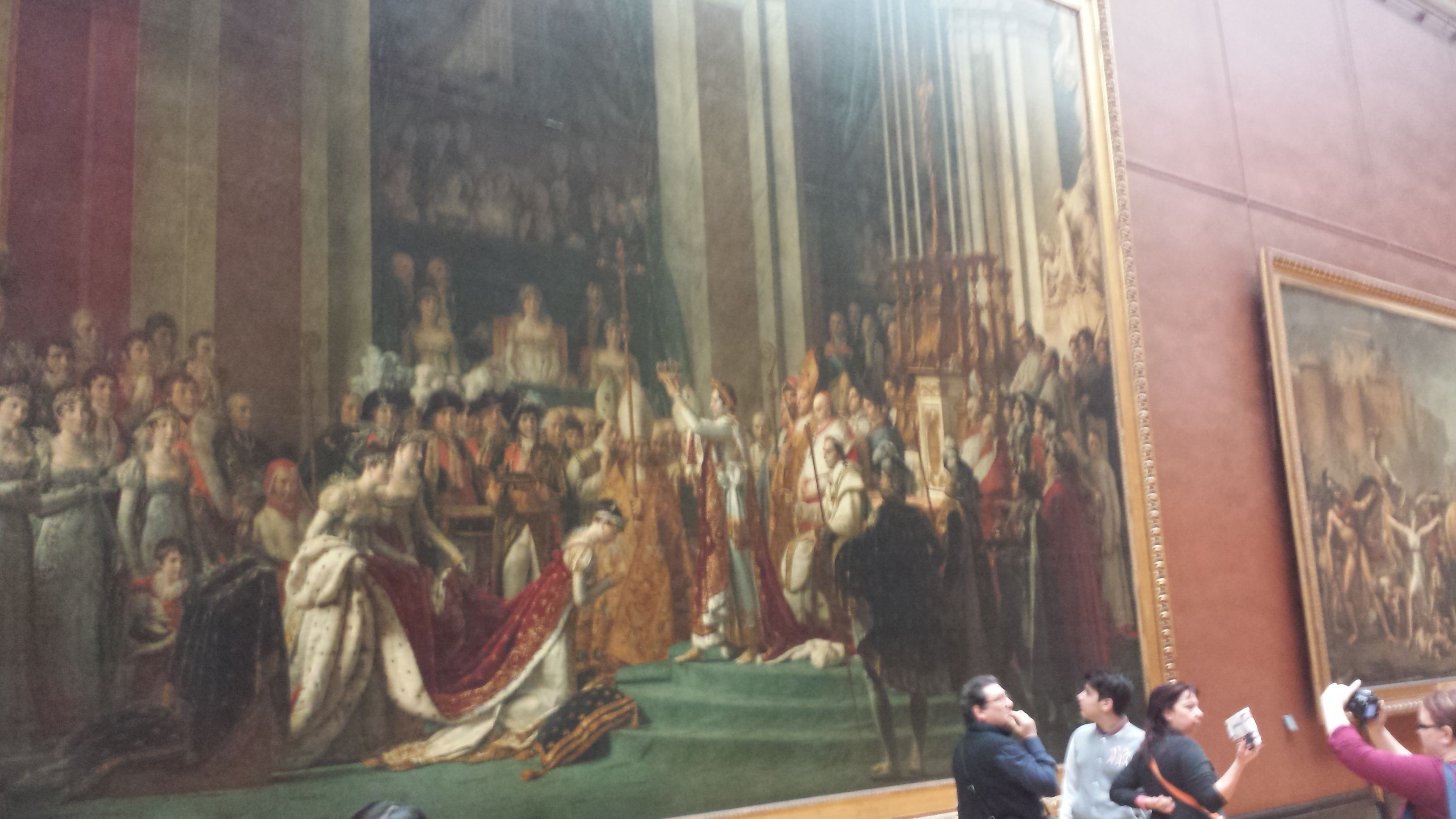 The Coronation of Napoleon ended the first audioguide tour we had decided to follow. The painting is huge and there were lots of details to take in 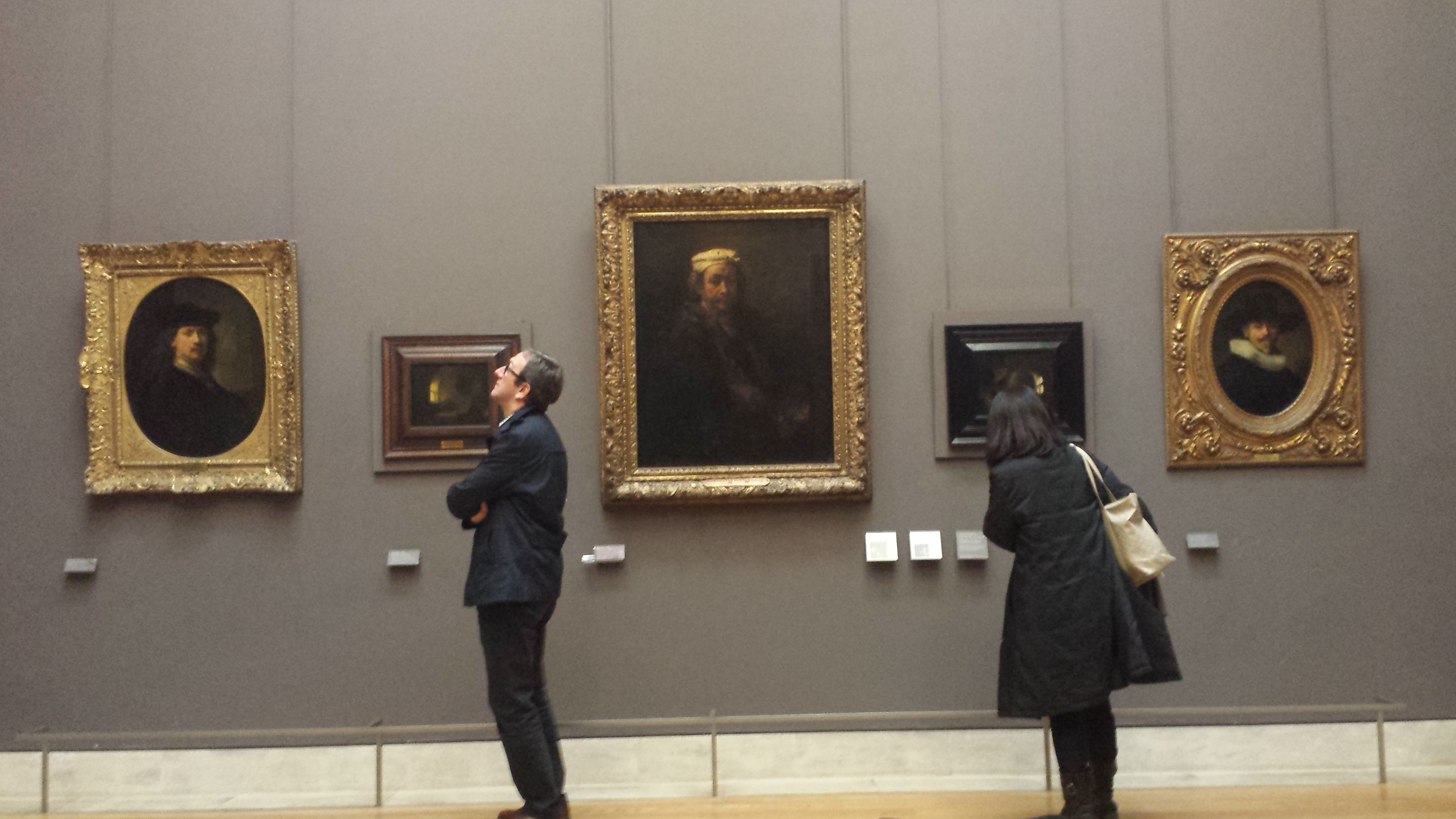 One of the last rooms we visited was full of Rembrandts, who was apparently very fond of selfies somehow

The tickets we had gotten also let us visit another nearby museum, but we were and had already spent most of the day in the Louvre so we decided to pass on that. We walked around a bit more, passing by one of the Paris bridges with love locks all over it. We ended our walk at the famous Notre Dame church; still tired, we passed on the long queue to get into the cathedral and took a taxi back to our hotel to rest up.

After a late breakfast of omelettes at a nearby French cafe, we spent the first half of the day travelling to the Eiffel Tower and hanging out at the base of the tower for a while, near a grassy area where there were a lot of other people just lounging around. We held off on going up the tower, saving it for our last day. Nothing of import happened for the rest of the day.

We had set aside this day to travel to Versailles, which required us to take a longer train ride out of Paris. We took a short walk from the train station to the Chateau, bought our tickets and got audio guides (from which we learned a lot). Some highlights follow. 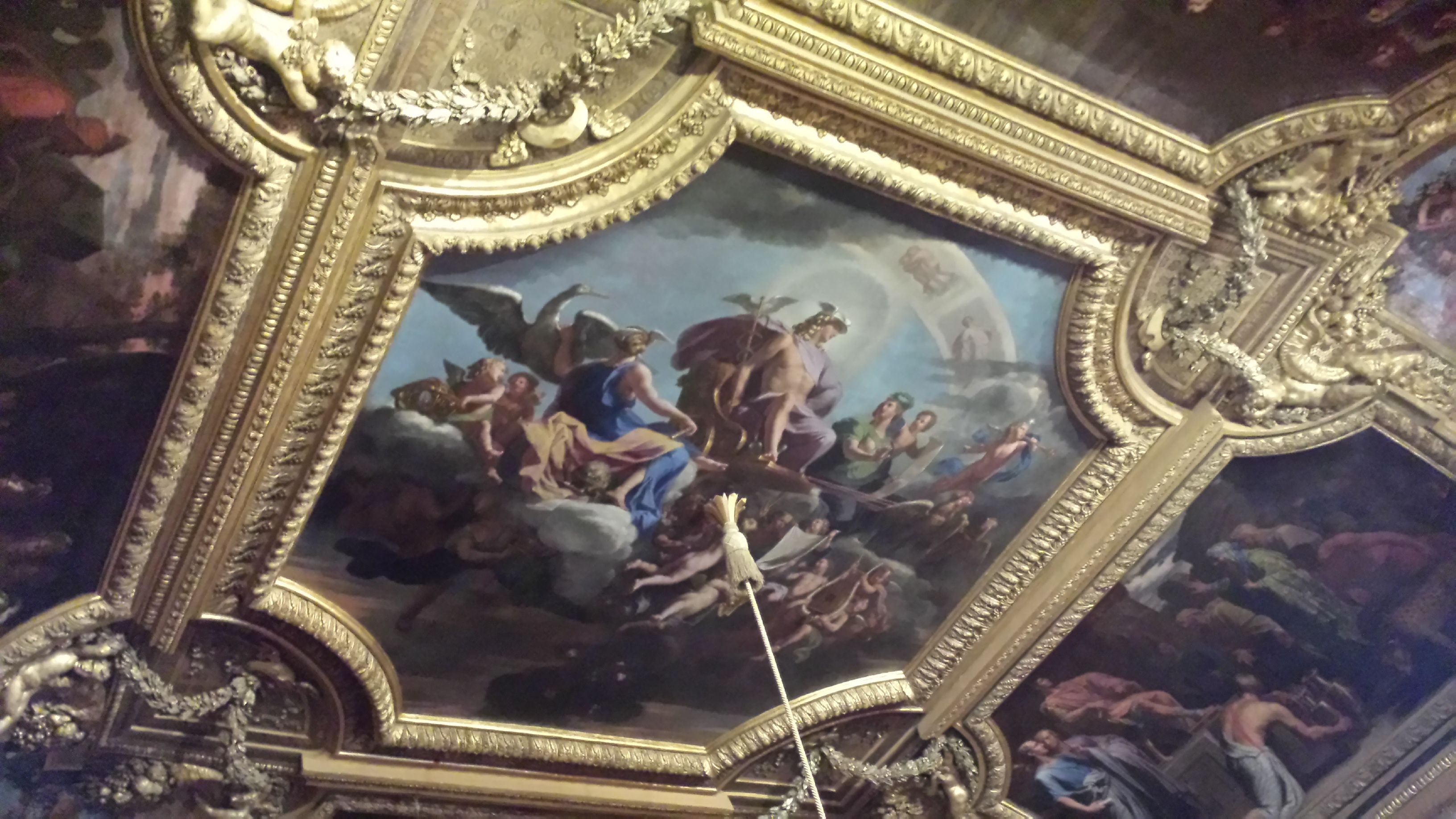 There's a series of rooms with detailed paintings of Greek myths which left me looking up all the time. I think this Apollo one was my favorite 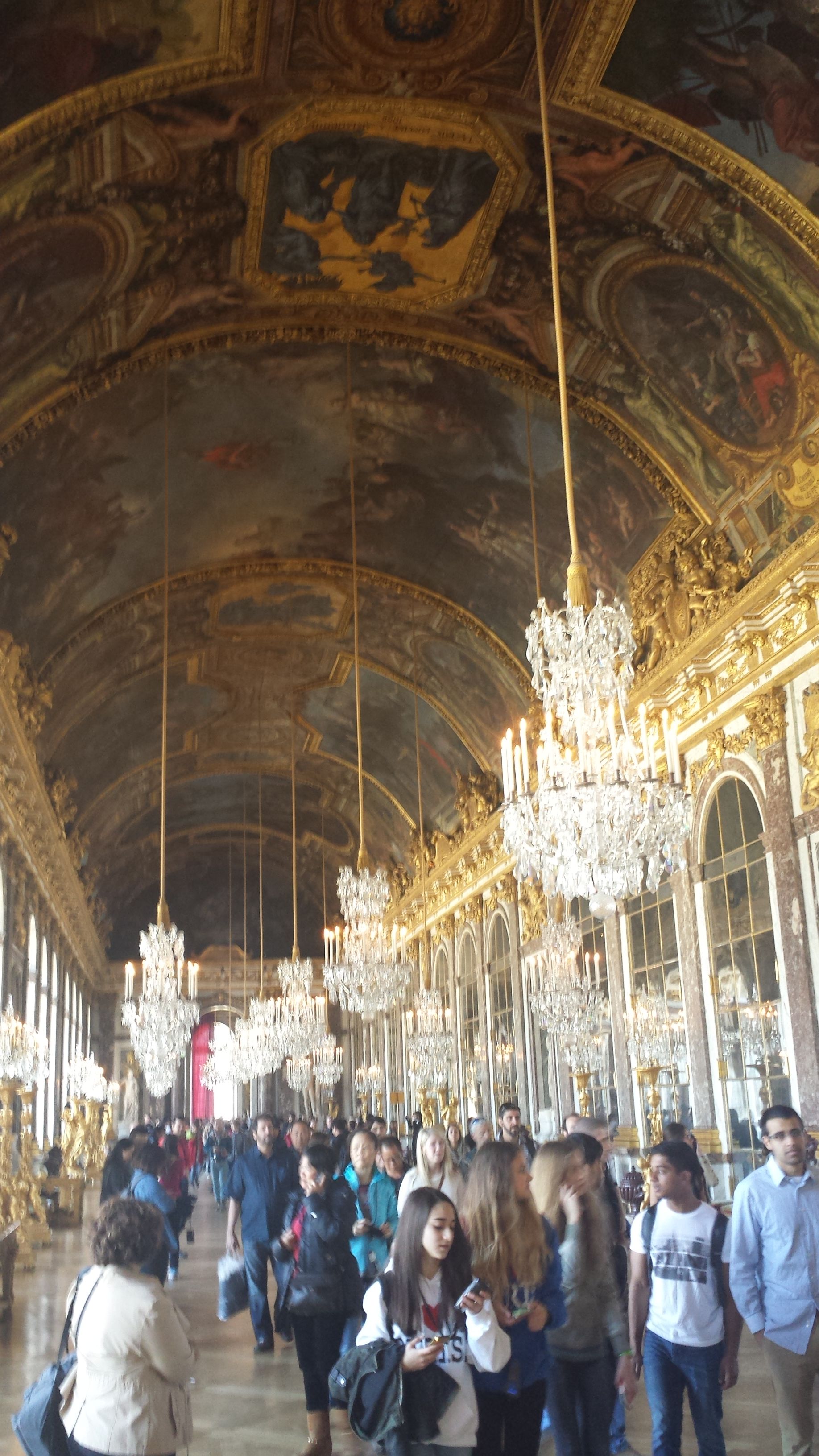 The famous Hall of Mirrors in the Chateau 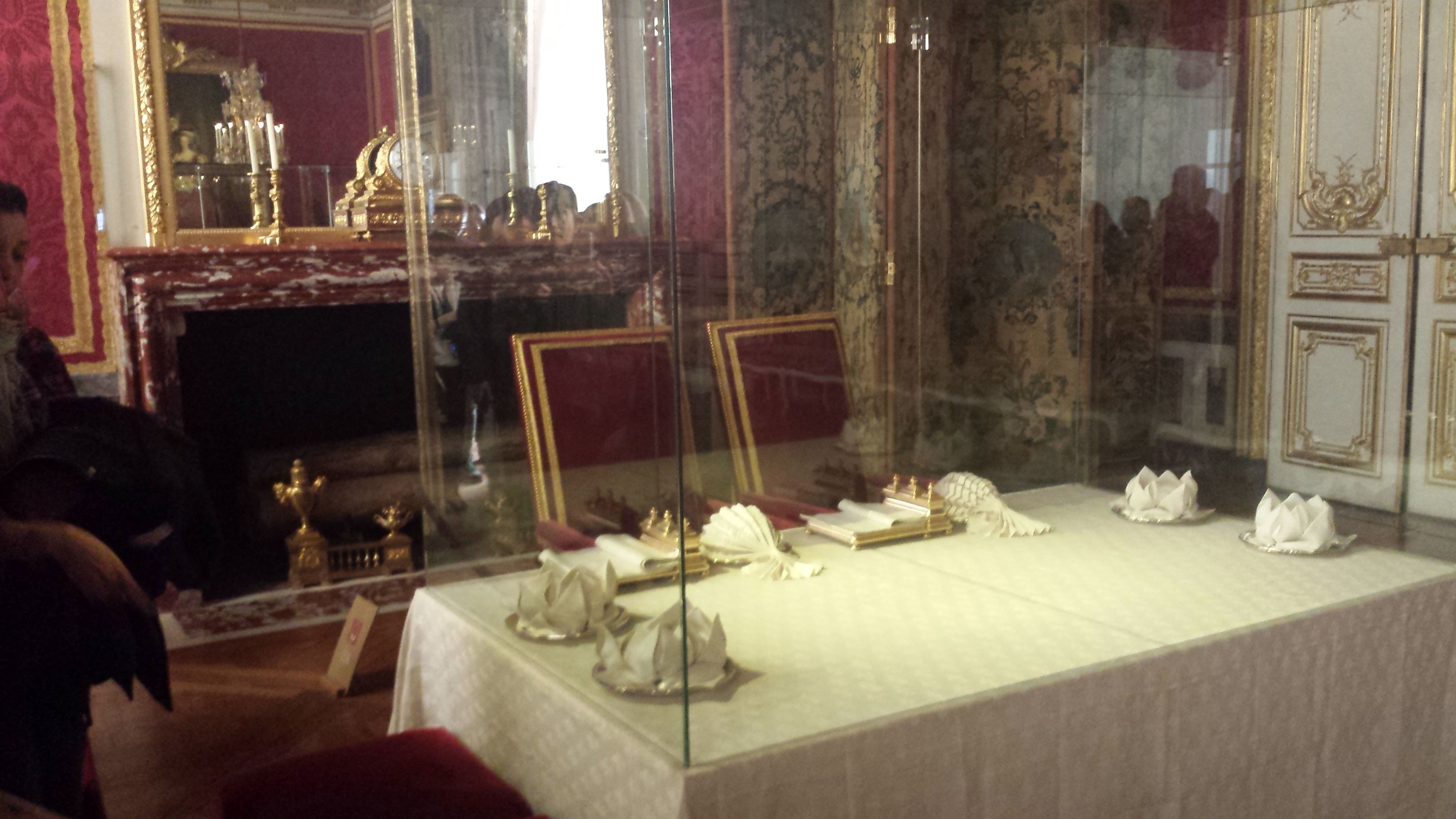 There's a series of rooms where normal people could get a glimpse of the king and queen's daily lives, including their bedrooms and this dining room 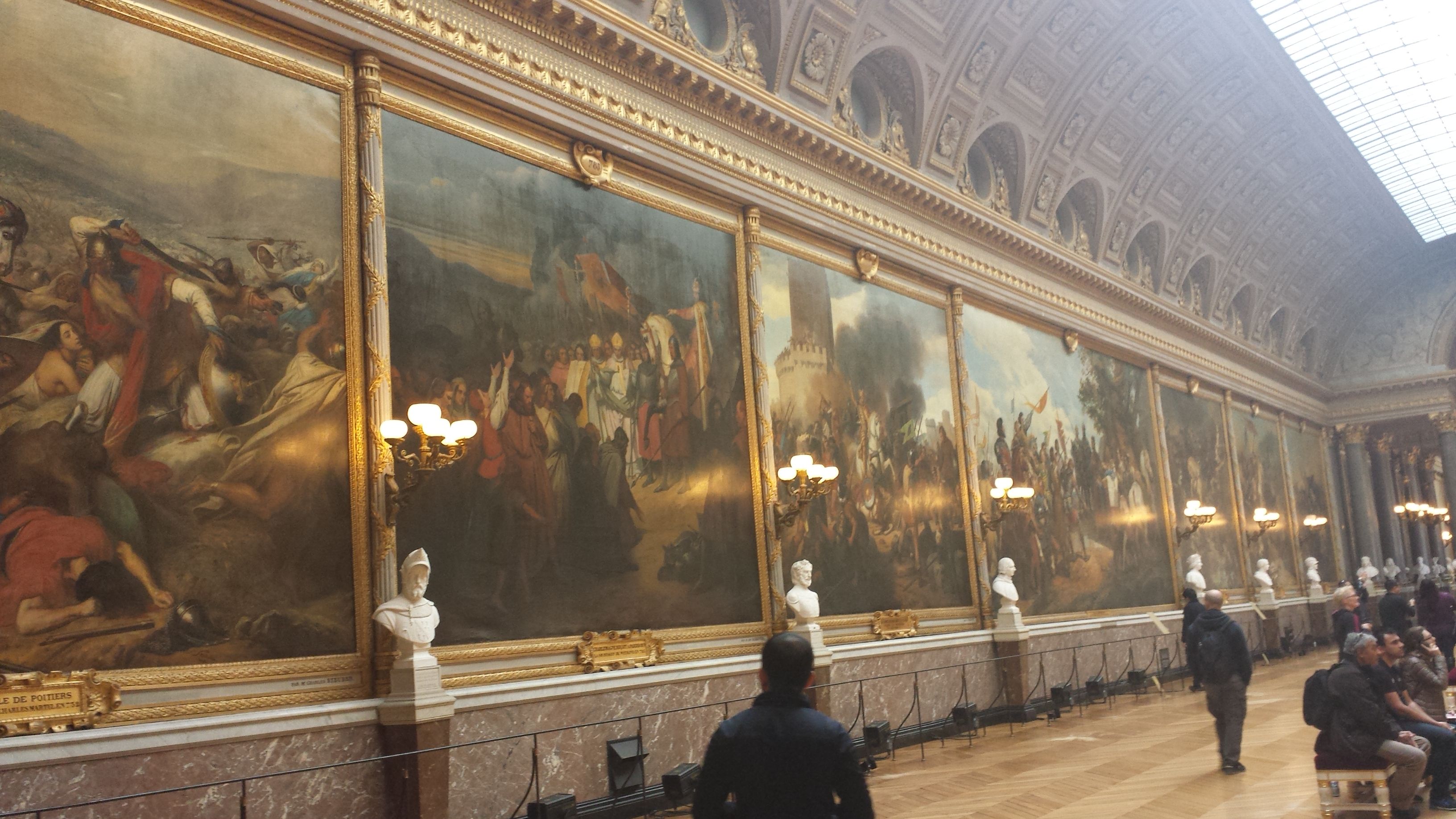 The Hall of Battles was easily my favorite thing in the Chateau, I paid attention to each of the battles/paintings discussed by the audioguide. Typically, I have already forgotten most of the information, but I was well entertained

I think we managed to visit most if not all of the rooms of the Chateau, which gave me a new perspective on how ostentatious the life of royalty really was and a better appreciation of French history.

After the Chateau we went prowling around the gardens which were huge. We visited the Grand Trianon and Petit Trianon, smaller complexes which were the residence of Marie Antoinette, and spent some time being lost on our way back to the Chateau.

It was late in the afternoon by the time we finished our tour of the Chateau and the Gardens, well worth the trip. We took the train back to Paris and decided to have an expensive dinner at a fancy French restaurant (one of the few times we decided to splurge on food). I had a French onion soup and a rather large pork chop.

After eating our last breakfast at the old lady’s pattiserie near our hotel, we took the Metro to the Montmarte hill overlooking Paris and famous for the white-domed Basilica of the Sacré Cœur (“Sacred Heart”), though we didn’t bother going inside the church. We spent some time here listening to a street performer and taking pictures of pigeons (omitted here for brevity, available upon request)

Panorama of the view from the Montmarte hill

We walked back to our hotel, passing by the famous Moulin Rouge. We decided to rest and split up for the remainder of the day and just meet up later in the afternoon for our climb up the Eiffel Tower.

I took a leisurely afternoon walk to the Eiffel and waited for my companions at the same grassy spot we hung out at before. As the afternoon grew late, the wind grew bitingly cold and I was thankful when they finally arrived so that we could go up the tower. 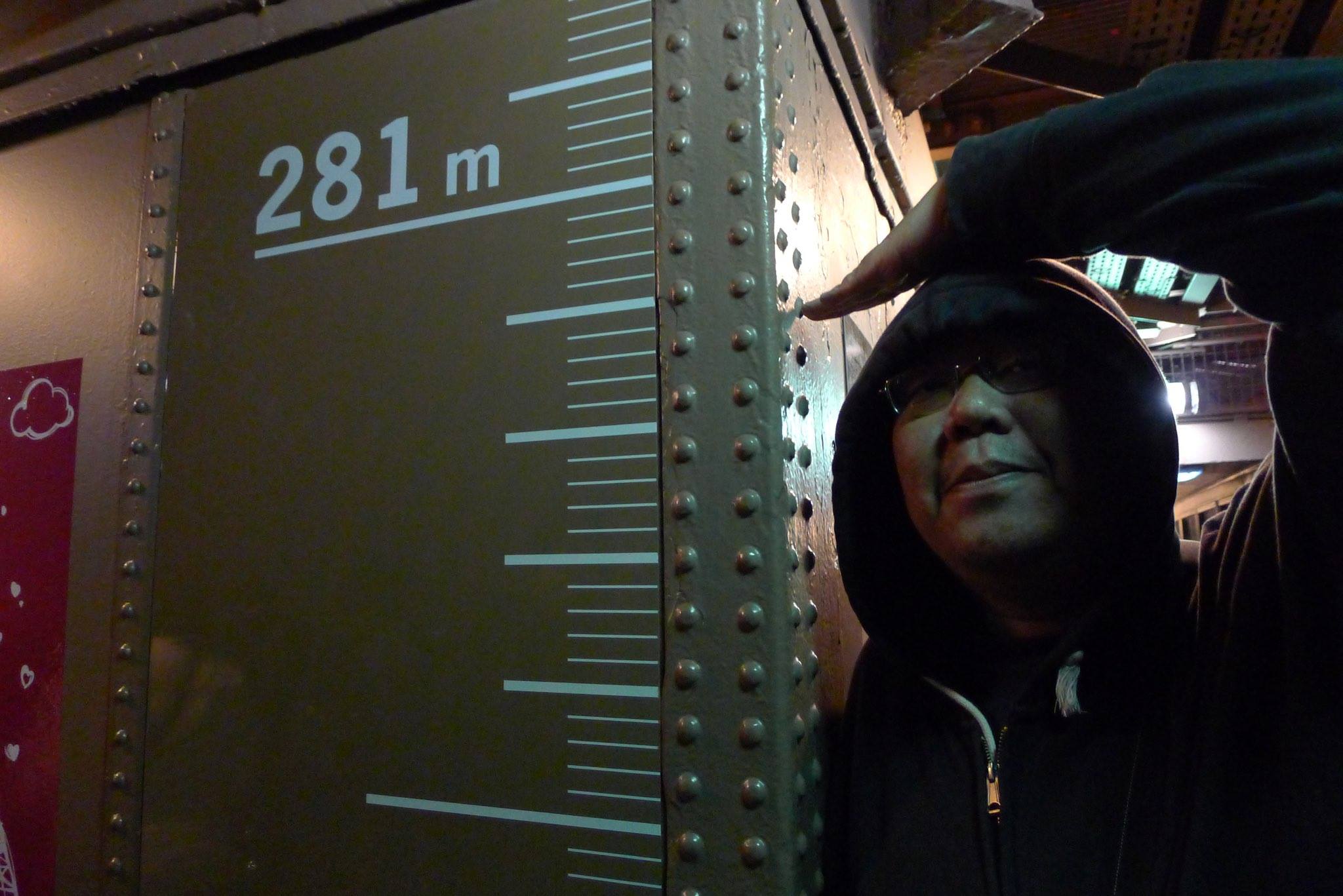 We took the train ride to the top of the Eiffel, almost 300m above sea level. It was ridiculously cold at the top too, my hoodie was nowhere near enough 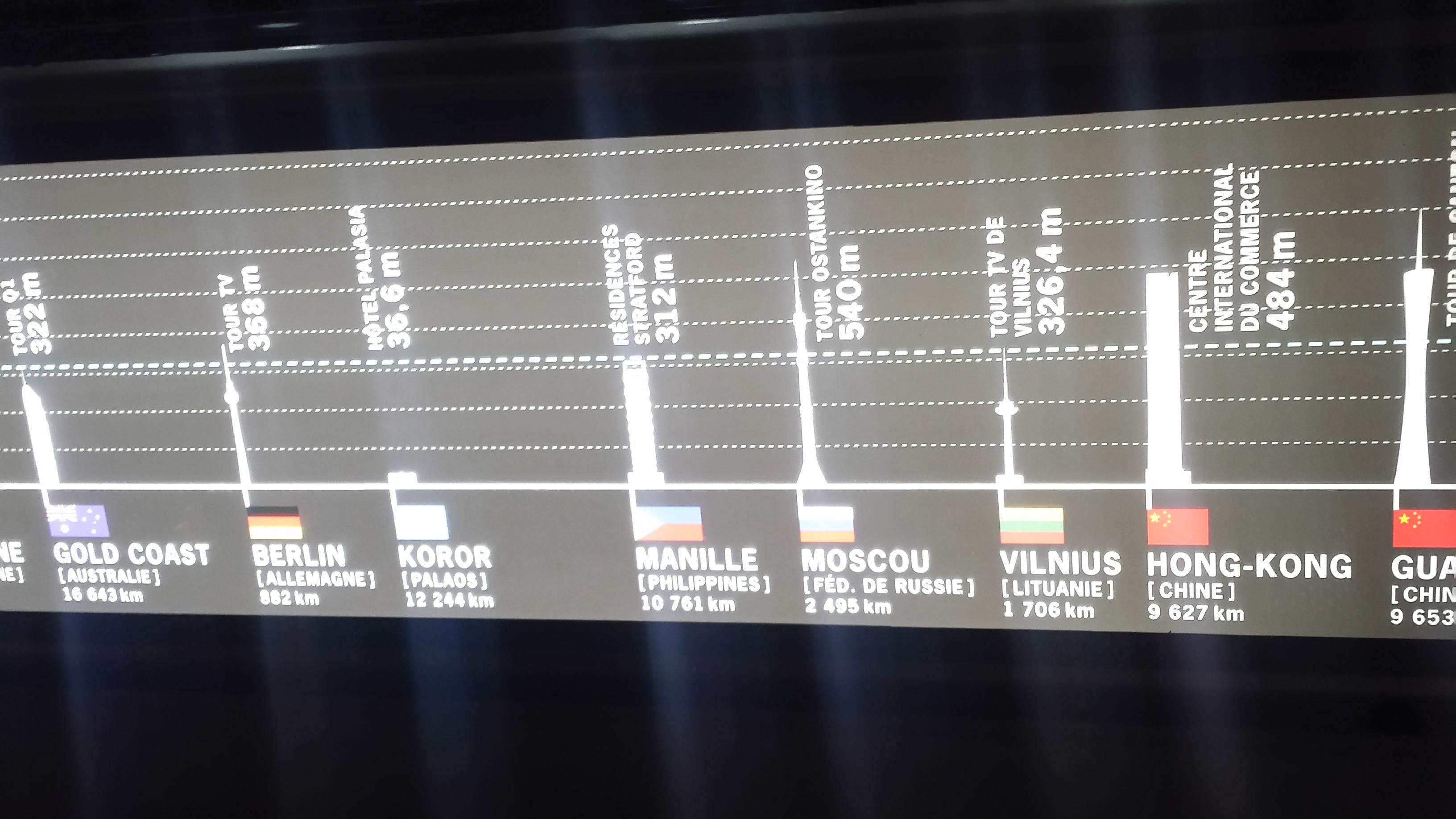 A display atop the tower showed the distance from different capital cities around the world, and the height of the highest building there, for comparison to the Eiffel. I have no idea what this Stratford Residences is though

Panoramic view from atop the tower. Please excuse my poor camera skillz 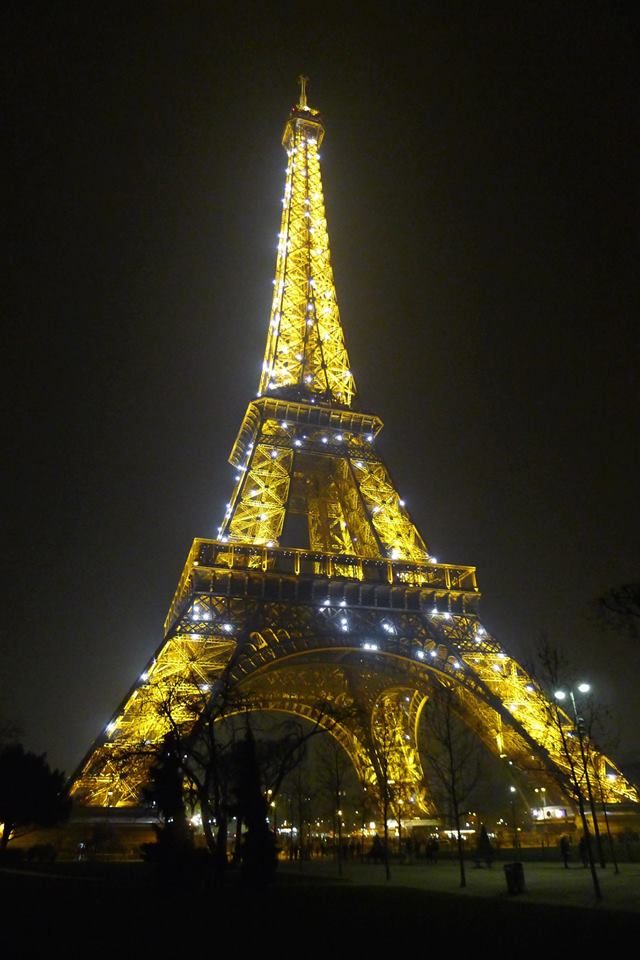 After enjoying the view from the top of the tower, we descended and enjoyed the tower's light show

We flew back to Barcelona Thursday morning. We had booked a different hotel for our last leg, the Charm Suites along Parallel Ave. It turns out the staff were mostly Filipinos so they were very welcoming to us. The 3-person hotel room was easily the best we had booked for the trip. The room was large and came with a large TV, a fridge, a kitchen area with plates, utensils and a stove for cooking and thankfully free wi-fi.

We spent the last leg of the trip in decompression mode, mostly relaxing at the hotel room. I was planning to attend a Dragons of Tarkir (MTG) Prerelease that weekend so I took a 30-minute walk Thursday to find the place I would be playing at, which turned out to be in an area filled with shops relevant to my interests: toy stores, book stores, comic stores, etc. I decided to register for the prerelease at Gigamesh, a large sci-fi/fantasy/comic book store with a back room for the tournament.

Before the weekend we took a leisurely afternoon/evening walk to the Barcelona coast so that we could make contact with the Mediterranean sea and having seaside paella for dinner.

I spent Saturday at Gigamesh having a good time playing with Spanish cards at the DTK prerelease. I had spent some time during the past few days studying up on the card lists in Spanish, worried that I would have a tough time with the local players. Most of them understood English well enough though.

Finally, Sunday was our flight back to Manila through Singapore, and the end of our trip. And the end of this series of posts, I hope you enjoyed it – I’m not sure I’d be willing to go into such detail again haha. Well, I have a couple more trips planned this year, so let’s see what happens there. Thanks for reading!