I was on a Twitch chat for a local streamer yesterday and someone bought up the term “comsat”, popular in local computer shop or “compshop” (also called “internet cafes”) culture. In the context of multiplayer games, it means to spy on what your opponent is doing by peeking at his screen. I’ve never heard this term used other than by Filipino gamers, so I have reason to believe it’s a local thing. There is an Urban Dictionary entry, but the submitter might just be a Pinoy as well.

Some of the younger gamers weren’t familiar with the origins of the term. Someone even said they thought it mean “computer satellite”, as in someone who hovers over the opponent’s computer to see what they’re up to. The term actually originates from the original Starcraft, it’s a Terran building used to enable scanner sweeps. Starcraft was one of the earliest popular LAN games in the Philippines; we used to play it a lot on the lab computers after hours in college. I’m not sure if this kind of thing is now frowned upon, but back then one of the regular players in our lab was one of the younger teachers, so whatever. I suppose when compshops started to proliferate, many of the initial patrons were familiar with Starcraft and hence the term comsat and it propagated to later generations of gamers who played mostly games like the various versions of DOTA or Counterstrike.

Compshops were a popular small business back in the day. In fact, I briefly considered running one myself, the startup capital needed wasn’t too high. (But like many potential endeavors, it felt like too much work.)

Compshops in the Philippines of course had their uses other than gaming - many students used them to do schoolwork or get something printed. But they became popular mostly for gaming, especially among the youth. Many were so obsessed we got memes like the one below with kids continuing to play despite floods, an image I’ve seen even in international gaming forums. 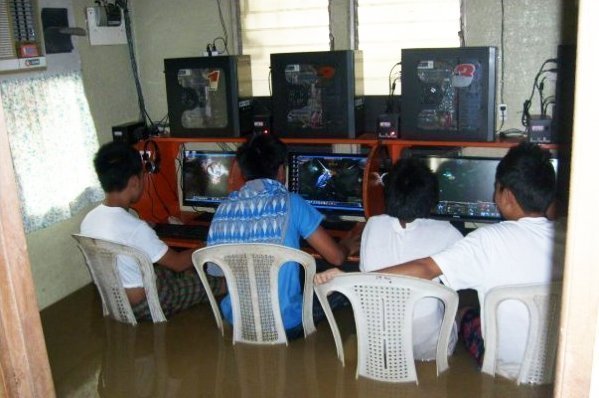 I never got too much into compshop culture, particularly playing versus strangers and all that. I think part of that is because I was already graduating when they really took off in Metro Manila around the mid 2000s. But I also wasn’t really a fan of the multiplayer games that became popular locally - the aforementioned DOTA and Counterstrike - or the popular MMOs like Ragnarok Online.

The only multiplayer PvP games I really played over LAN were Starcraft (mostly with labmates during the college days) and occasionally Warcraft III. I was comfortable with Warcraft III because I played it on Battle.net back home so I didn’t mind playing it with friends. I never really got into that phase where I would hang out in compshops and play with strangers. Between work and my home gaming, I didn’t really have time for that.

I did enjoy the occasional game night out with coworkers after work - there was a small compshop near Tektite we’d go to. The only games I remember playing this way were Left 4 Dead / Left 4 Dead 2. I find that coop games like these tend to generate more funny moments overall, and we had a lot of fun shouting over the computers to try to get our party’s act together. Once we got tired of L4D, I’d take my leave to go home early while the more hardcore players stayed behind to play DOTA or CS late into the night.

It’s probably been a decade or even more since I’ve last been to a compshop. Interest in this kind of LAN gaming kind of faded among PC owners in the 2010s, around the same time that most games stopped offering LAN play in favor of online gaming. The writing was on the wall when Starcraft 2 announced in 2009 that they wouldn’t support LAN. There was no reason for compshop owners to spend for legit copies of Starcraft 2 just so their clients could play it. PC owners who preferred to play SC2 or other newer paid games ended up mostly just playing online at their own homes. And with the rise of modern online voice chat, you could still replicate the experience of shouting at your teammates or opponents, although of course it wasn’t really the same as hearing the trash talk in person at a compshop.

Compshops still continued to exist well into the 2010s of course, though perhaps not as prevalent as before. They offered mostly F2P or freemium games, although many still came with old / pirated copies of the classics - many players still played the older games because that’s what they knew. The clientele became primarily the less privileged who didn’t have access to a PC or internet or the latest games at home, many of them minors.

I think even during the pandemic, compshops still managed to survive. They’re kind of essential for less privileged students who all have to take online classes now. I imagine the industry will still be right there well into the 2020s - so long as the inequality and lack of access to PCs and internet persists, so will the humble compshops be there to help the less privileged enjoy some PC gaming as well.

Loved this insight into nerd culture in other places. We never really had these types of venues in the UK did we? I remember internet cafes in New Zealand which doubled up as LAN gaming centres. Maybe I never saw UK versions as I didn’t use them?