(“Late Game Review” because I’m trying to play through games on my ridiculously old backlog, so these games are pretty old)

I got my digital PS3 copy of Ni No Kuni during some kind of PSN sale a while back for like $10 and seeing as how the sequel came out recently, I figured I’d better finish the first game before my rarely-used PS3 decides to die on me.

Anyway, the game was great and I enjoyed it enough to go for the platinum (post-game was a bit grindy though): 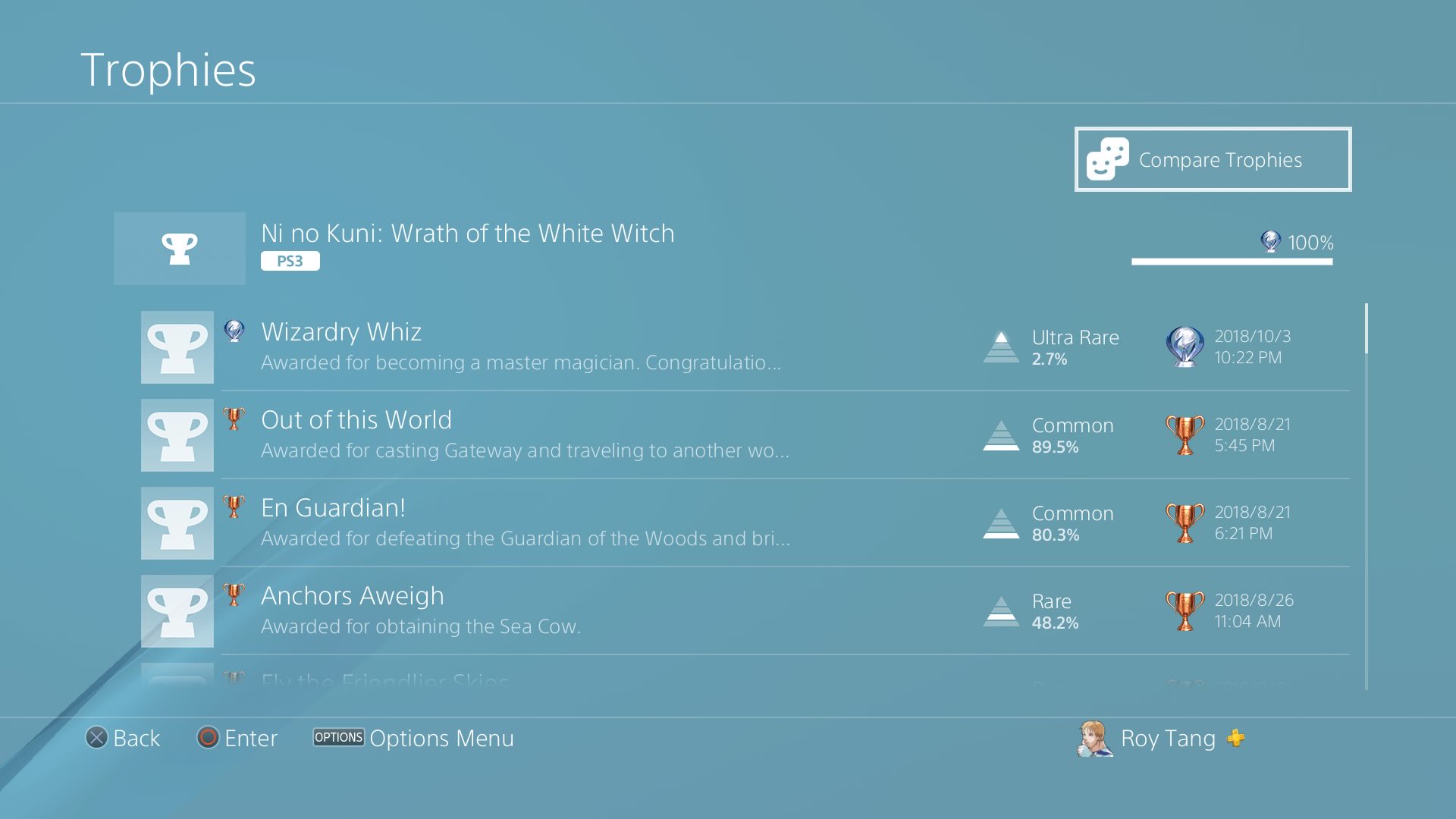 Visually, it’s a very pretty game, animated Ghibli-style. The combat system is basically Pokemon. So yes, it’s Ghibli+Pokemon. Pokemon in this game are called “familiars” and each party member can have up to 3 familiars ready to fight in battle. The party members can fight directly as well, but most of the time it’s a better idea to let your familiars go at it.

As you can imagine, the grindiest part of the post-game was collecting all the familiars. Ok, not all of them, the achievement only required 250 different species captured, but that’s a helluva lot. During the normal main game run, I only captured a bit less than 100 different species. It was made more grindy by the fact that there’s no mechanism for trying to capture the familiars (i.e. pokeballs), you basically just have to beat them in battle and whenever you beat one, there’s like a 2-8% chance that you will get an opportunity to recruit it. Thankfully, you can shortcut the grind a bit by collecting the lower level ones and using metamorphoses (basically pokemon evolutions) to get the higher level ones.

The story feels like it’s targeted towards children, so it has a kind of fairy tale feel, and the world is very bright and cheerful (mostly) and there’s things like a kingdom where the king is a giant cat, and so on. Not that the plot is simple mind you – there’s quite a bit or parallel worlds, a tiny bit of time travel, and a few plot twists thrown in (although you might have seen them coming).

My favorite part of the game has to be all the puns. Many of the familiars have some sort of pun involved in their name, like there’s a dog familiar called “Ruffian”; there’s an egg-shaped familiar with a pharoah mask called “Eggyptian”. There’s a cat thief familiar called “Purrloiner”, who evolves into a “Cutpurrse”, and can then evolve into another form which you can fight on the seas called a “Puss in Boats”. There’s a sheep familiar called “Baatender” who can evolve into a “Baabarian”. There’s a familiar that wears a turban and he’s called a “Turbandit”, and he has higher forms called “Turban Myth” and “Turban Legend”. Okay, I’ll stop before I enumerate them all.

There’s a few other systems familiar to JRPG players – crafting, a casino, farming enemies for drops, bounty hunts, errand boards and so on on. Oh and some nonsense about fixing people’s hearts by finding people willing to contribute attributes like confidence and kindness and whatnot.

All in all a very fun game and something I’m glad to have gotten off my backlog! Not sure if I’ll have time to play the second game though, maybe in another five years?